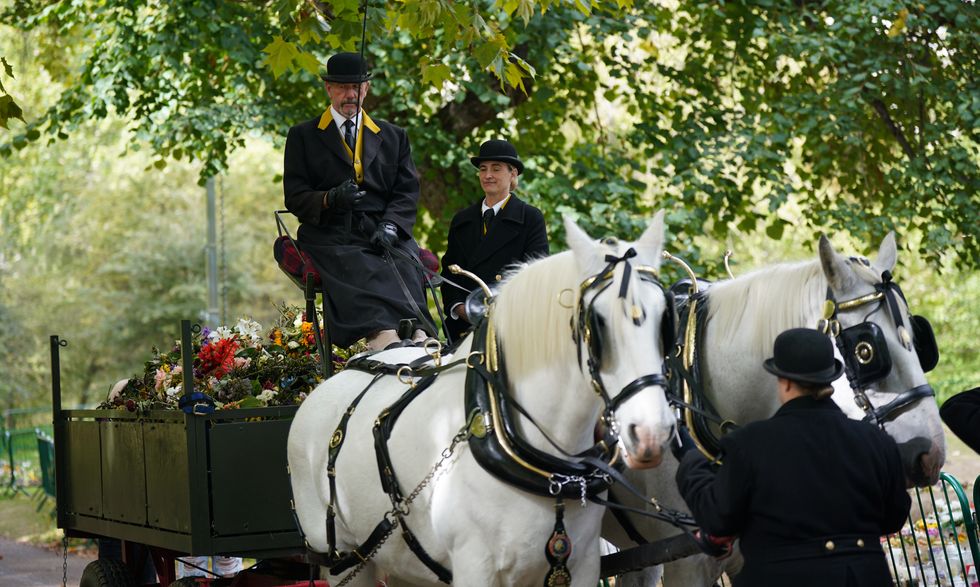 Two shire horses have transported flowers left for the Queen in central London to be turned into compost for the royal parks, in what has been described as a “fitting” final tribute.

Heath, 17, and Nobby, 14, who appeared in the late monarch’s Platinum Jubilee celebrations, pulled flatbed drays filled with bouquets laid in Green Park, to Kensington Gardens where the floral tributes will be turned into mulch.

The two senior greys are among a number of horses helping to carry the flowers to Kensington Gardens’ leaf pen throughout this week.

The compost will be used to enrich the soil of London’s royal parks, including the floral displays outside Buckingham Palace, which provided the backdrop to the Queen’s funeral processions.

Royal Parks programmes manager Bryony Cross, who has helped recruit volunteers to maintain the tributes, said the process made “perfect sense” because of the late monarch’s environmental legacy.

“I think it makes perfect sense really, the Queen and King Charles, both really conservation-focused on sustainability and the environment, so it makes a lot of sense to take those flowers left for her and then really literally feed them back into the parks,” she said.

“It seems fitting that that happens.”

“In a way, it’s sort of new life, rebirth, and I think it’s exactly what she would have wanted,” he said.

“Everyone getting involved, so many people smelling the perfume of the flowers here, coming with children to lay flowers, read cards and look at tributes. It really, really has been so overwhelming to see that.”

He estimated “hundreds of thousands” of bouquets had been left in Green Park and its surrounding area over the national mourning period, with more visitors to the green space than he said he had ever seen before in his 20-year career as manager.

Andrew Williams, park manager at Kensington Gardens, who is responsible for overseeing the compost process, said the floral tributes would contribute towards nurturing the parks’ soils for the next 500 years.

“To be able to turn the floral tributes into a material that’s going to go back into the parks, feeding and nurturing our soils, which really helps to sustain these parks for the next 500 years – the Queen’s floral tributes will play a key role in that,” he said.

The Royal Parks is a charity helping to maintain 5,000 acres of royal parkland since 2017 on behalf of the Government.

Please log in or register to upvote this article
FlowersQueenRoyalRoyal Parks