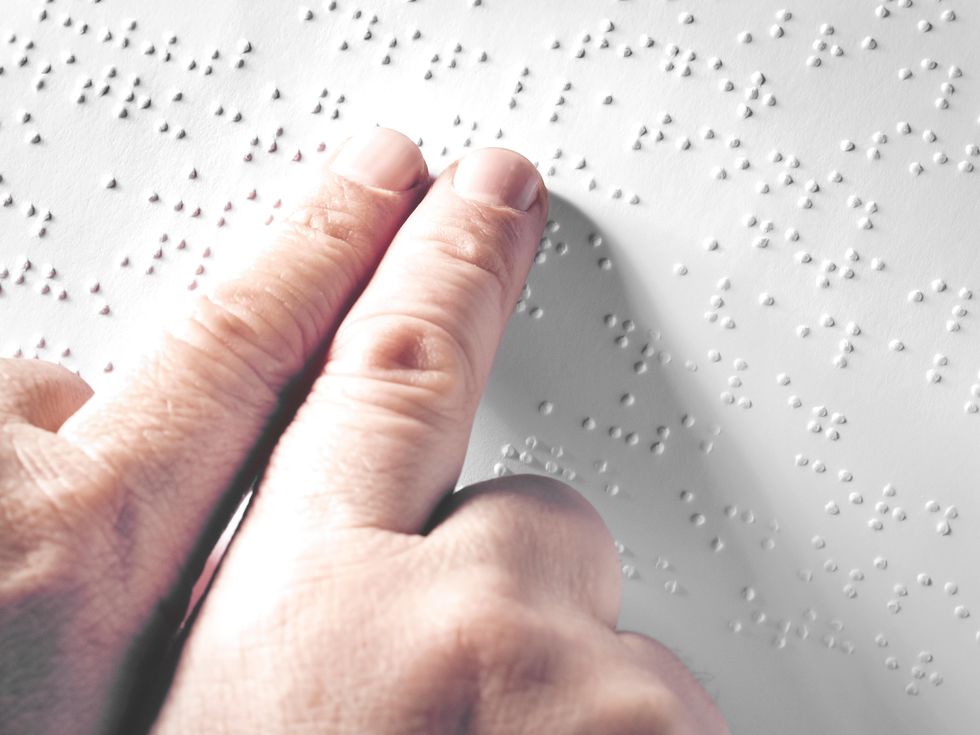 Braille messages will be used to encourage blind and visually impaired runners taking part in the London Marathon on Sunday.

Thirty-five runners with guides are expected to take part in the event while hundreds of others will be raising money for charities which support blind and vision impaired people.

Banners featuring messages of encouragement in Braille will line miles 20 and 23 of the course which are often points where participants need a boost to keep going.

Guides will be able to encourage their runner to the left side of the course so they can feel the Braille banner as they pass the barriers.

The tactile code was developed by Louis Braille in the 1820s when he was a pupil at the Royal Institute for Blind Youth in Paris.

Sam Fox, 52, from Benfleet, Essex, went totally blind eight years ago and is running this year’s TCS London Marathon on behalf of the charity Guide Dogs.

“I can’t stress enough how grateful I am that our community is being thought of at an event on the scale of London Marathon,” she said.

“When I heard about the Braille banners it brought tears to my eyes, I was so moved.

“A gold standard has been set by creating these banners and more people and companies should be following this example, as it can make a huge difference to those who are blind, yet it’s rare to see.

“I went totally blind eight years ago and my freedom has been given to me from my guide dog, Winston, however I find blind and vision-impaired people aren’t often thought about. For example, guide dog owners are often refused access to places.

Only two days to go. We are all excited and looking forward to the @LondonMarathon on Sunday. Good luck to… https://t.co/hBTBitGyDp
— RSBC (@RSBC) 1664554216

“I can’t express how thankful I am and I cannot wait to feel them on the big day.”

The banners have been created through a collaboration between sports retailers Wiggle and New Balance and the Royal Society for Blind Children (RSBC).

Mile 20, at Poplar High Street, often marks the point where runners have to push themselves beyond their longest training run.

Mile 23, on Lower Thames Street, is where RSBC opened its Life Without Limits Centre earlier this year to help blind and partially sighted children and their families to develop the skills, confidence and resilience to deal with the challenges they may face.

Shalni Sood, director of philanthropy at RSBC, said “It’s great to see a more inclusive and welcoming approach – the banners are a great example of this.

“We would love to encourage more organisations in the sports industry to actively support the participation of vision-impaired people. We hope to see more of the same in future.”

The RSBC’s work has been supported by a donation from Wiggle which will help to provide emotional and practical support for two families for a whole year.

Wiggle chief executive Huw Crwys-Williams said it is hoped the Braille banners will “create a special moment for vision impaired runners taking on this amazing challenge”.

Samantha Matthews, senior marketing manager UK and Ireland at New Balance said “Everyone should feel included on race day and that’s why we’re excited to support the visually impaired runners of this year’s TCS London Marathon, by providing accessible motivation and support through the toughest miles of the race.”