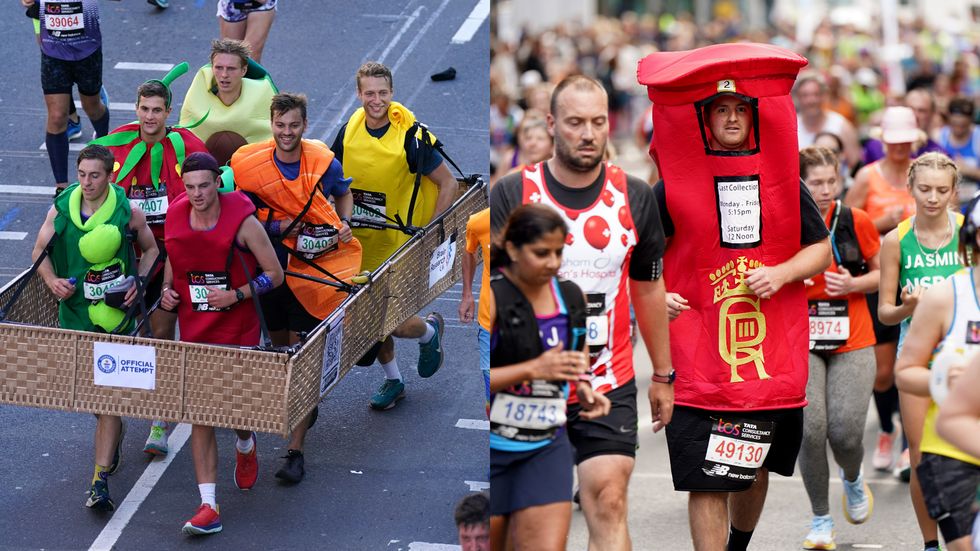 Thousands descended on the streets of the capital, many in fancy dress (Kirsty O’Connor/James Manning/PA)

A Buzz Lightyear and a bright red postbox featuring the King’s new cypher were among the fancy dress costumes donned by some of the thousands of people who took part in the London Marathon this year.

Whether as a personal challenge or in aid of a chosen charity, people donned colourful, large, and occasionally furry costumes as they ran the 26.2-mile course.

One group of six ran in a wooden crate, each dressed as a different fruit or vegetable, including a strawberry, avocado, and pod of peas.

Another person was pictured taking part in a head-to-toe dog onesie with a huge head and floppy ears as someone else, dressed as a bright yellow minion with silver-rimmed goggles, bounded along the route from Blackheath to The Mall.

One participant wore a neon green tutu and rainbow clown wig, shortly followed by a runner wearing a fluffy, red teddy head with a Seddon Construction helmet on top.

Buzz Lightyear’s green, purple and white ensemble was completed with black sunglasses while another ran dressed as a letterbox with the King’s new royal cypher on the front.

One was even brave enough to sport a thick-furred gorilla suit, while another raced in a Christmas Tree costume and someone else ran with an outdoor washing line swinging above him, attached to his rucksack.

The runners were cheered on by thousands of people who lined the streets to offer water, food, or just shouts of encouragement.

Costumes were not a deterrent for those determined to complete the race.

An ice cream cone costume – complete with sprinkles – and someone dressed as the pile of poo emoji were also among the London Marathon participants as thousands descended on the streets of the capital.

Please log in or register to upvote this article
charityLondon MarathonUplifting