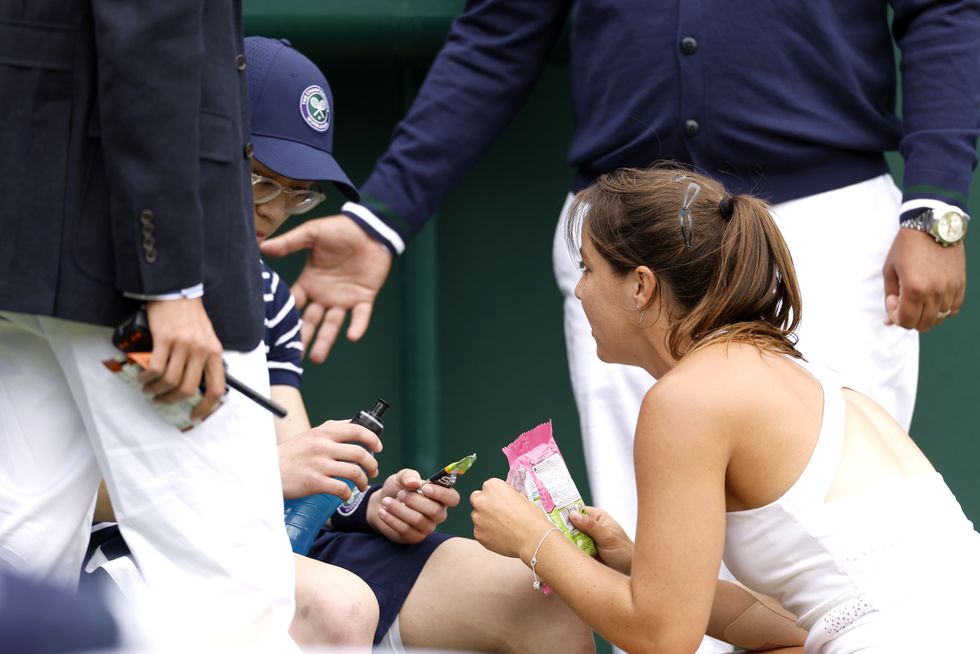 British number five Jodie Burrage has revealed Percy Pigs are one of her favourite snacks after offering some to a ball boy who was on the brink of fainting in the middle of her match.

The 23-year-old Wimbledon wildcard paused play alongside her opponent, Ukraine’s Lesia Tsurenko, for around 10 minutes as the youngster was led to a chair by a linesman and later helped off court.

Spectators said Burrage was “really sweet” as she attempted to revive him, and she told reporters afterwards that she empathised with the boy after herself suffering panic attacks as a junior at Wimbledon.

The women’s world number 169 said: “He just said he was feeling really faint, he actually couldn’t really even talk.

“It was quite distressing to see so we went to get some Gatorade and gel.

“The gel’s not the nicest thing so we managed to find some Percy Pigs somewhere along the line in the crowd which he got down and started to feel better.

“It didn’t affect me too much, I actually came out and hit a great serve, probably the best serve I hit in that match after that, so if anything it helped me.

“I’ve fainted a few times. I actually had a panic attack once in juniors here so I’ve been where he is.

“I kind of know how he was feeling and just tried to help as much as I could.”

When asked by the PA news agency if the pink Marks and Spencers confectionary would be her choice of sweet, Burrage said: “I definitely love a Percy Pig, that’s for sure.

“I know that other people like them as well.

“Percy Pigs are one of my favourites, I would say, so I’d definitely recommend it.”

Friends and Glasgow locals Val Shand, 61, a retired lawyer, and tennis coach Laura Middleton, 60, were courtside when it happened.

Ms Shand told the PA news agency: “He was either too hot or he hadn’t had enough to eat, he just looked like he needed sugar or water.

“Jodie Burrage was really sweet, she went and got him water and sweets.

“She was really good, really nice to him.

“He sat for a while looking like he was about to pass out.

“If I was his mum I would have been over there, but fortunately for him I wasn’t. I felt for him.”

Ms Middleton added: “He was wilting and his glasses were off as well.

“The game just stopped. It was at the end of a point and he sort of just crumbled.

“Tsurenko handed over some sweets or gummies for him to eat as well.

“It seemed a little while before somebody came to get him.

“It felt like longer because we were distressed for him, because it didn’t look like he was going to get back on his feet without help.”

Steve Hanlon, 35, a finance specialist from south London who was also watching the game, said he saw audience members hand Burrage the Percy Pig sweets for the boy.

He told PA: “As far as I could tell, he looked like he started to feel a bit faint, sat down, head slumped a bit.

“He just looked exhausted but it had only been one game back in, so I’m not sure.

“Jodie went and got him a drink and some sweets from the crowd.

“I think someone from the crowd handed it over. I think it was Percy Pigs – which solve every problem, right?

Please log in or register to upvote this article
SportWimbledon