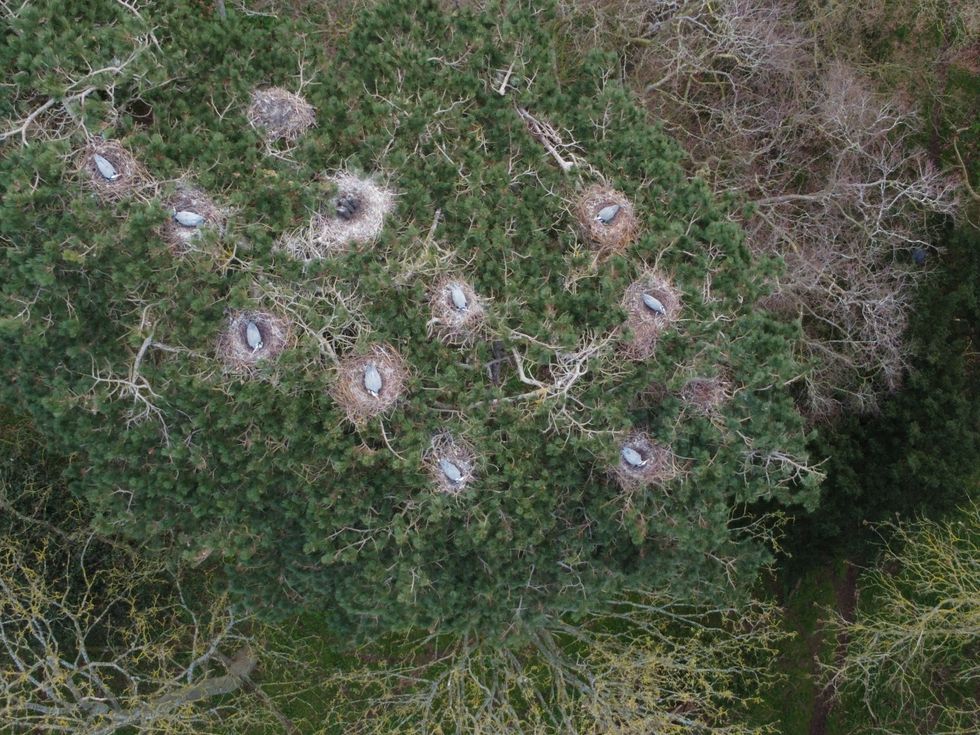 Birds eye view of the heronry at Belton House in Lincolnshire, cared for by the National Trust (Andy Chick/National Trust/PA)

Drone images giving a bird’s eye view of nesting herons at a stately home cared for by the National Trust have revealed surprising numbers in the heronry, the charity said.

A drone was used for the first time to get a better look at the herons nesting at Belton House, Lincolnshire, as part of the British Trust for Ornithology’s (BTO) annual heronry census.

The drone, which was flown 15 metres above the treetops and adhered to strict guidelines for wildlife monitoring, revealed 11 nests – nine more than expected, the National Trust said.

Ecologist Andrew Chick had been expected a couple of active nests, but the 11 shown from the survey indicates 22 birds are incubating three to four eggs each.

The National Trust said the strong numbers indicated positive effects of the charity’s conservation work to restore the stretch of the River Witham that runs through the Belton estate, including restoring natural features such as shallow areas and riffles to attract white-clawed crayfish and brown trout.

They usually lay their first egg in mid-March and only have one brood per year.

“These herons have probably chosen to nest in this particular Scots Pine tree because of its easy access to Belton’s ornamental ponds and rivers, which the National Trust has been actively managing and improving.

Heron watching patiently for its prey at Belton House in Lincolnshire, cared for by the National Trust (Steve Nesbitt/PA)

“It’s likely the herons have been present at Belton for decades, but thanks to the view from above this year we’ve been able to get a much more accurate record of how many are nesting in the heronry.”

Carl Hawke, nature conservation adviser at the National Trust, said: “It’s great news to discover our heronry at Belton is much larger than previously thought.”

The number of grey herons in the UK has been steadily growing in recent years, but in Lincolnshire there has been an unexpected decline, with just 20 breeding sites recorded in the county in 2021.

The team at Belton hopes their discovery shows heron numbers in the county are improving.

Mr Hawke said it was clear the conservation work, which later this year will also see wetland habitat created alongside the river, was having a positive effect on the estate’s breeding population.