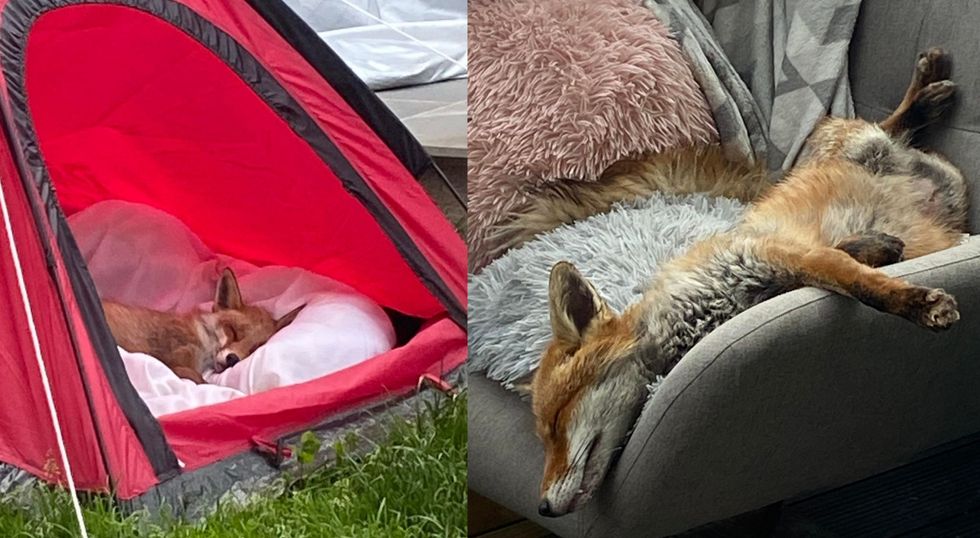 The family bought a tent for the injured fox to sleep in. (Elizabeth Wink/PA)

An “animal-loving” family in Glasgow had an unexpected visitor when an injured fox took refuge in their home.

The fox – given the name Florence – was nursed back to health by Liz Wink and her four children after they noticed it had a bad wound on its side.

Ms Wink, 53, told the PA news agency: “My eldest son came back one day and said a fox had been following him home and was now in the garden.

“I have three spaniels and they were barking but she was still trying to come in, putting her nose through the letterbox.

“I noticed she had a big wound on her back. I’m a qualified nurse and when I saw the wound I just thought it looked awful.”

After giving the fox some food and contacting a vet for advice, the family decided to help the injured animal.

Ms Wink bought some medication online to treat Florence for mange and began adding it to the fox’s meals.

The family even bought a £19 tent for their furry guest to sleep in as it recovered at their home in the Old Drumchapel area of Glasgow.

“We got her a wee tent and she would periodically go between the tent and the chairs in our pergola,” Ms Wink said.

“We made the tent comfy for her, we wanted her to feel like she was safe in a den.

“We have always been animal lovers, last week we rescued a baby seagull that we found in the road and we called the SSPCA.

“But Florence was just different, she was so tame.”

Videos posted on Lucy’s TikTok account and showing the fox exploring the family home as it recovers have racked up over 1.8 million views.

Florence spent two weeks sleeping at the family’s home until one day she got up and left.

“Her wound was getting better very quickly and then after two week’s she was gone,” Ms Wink said.

“My daughter is exceptionally good with animals and she did some research into it and found out about something called a rescue nap.

“This is when a fox is injured and it picks a safe place to recuperate until it has recovered.

“Apparently, sometimes when this happens foxes will return to the safe garden with their babies.”

Florence may have left but the Wink family hope to see their unexpected guest again soon.

“My nephew’s girlfriend actually ended up sending me a video that her friend had posted on Facebook of a fox who had followed them and it was Florence,” Ms Winks said.

“We knew it was definitely her because there was a mark in the same place were her wound was healing.

Americans would be shocked by English breakfasts, woman says

These are the hilarious ways people ‘bagged a husband’ in 1958

Another couple has got engaged at Binley Mega Chippy

Please log in or register to upvote this article
FoxGlasgowPA ReadyrescueTikTok