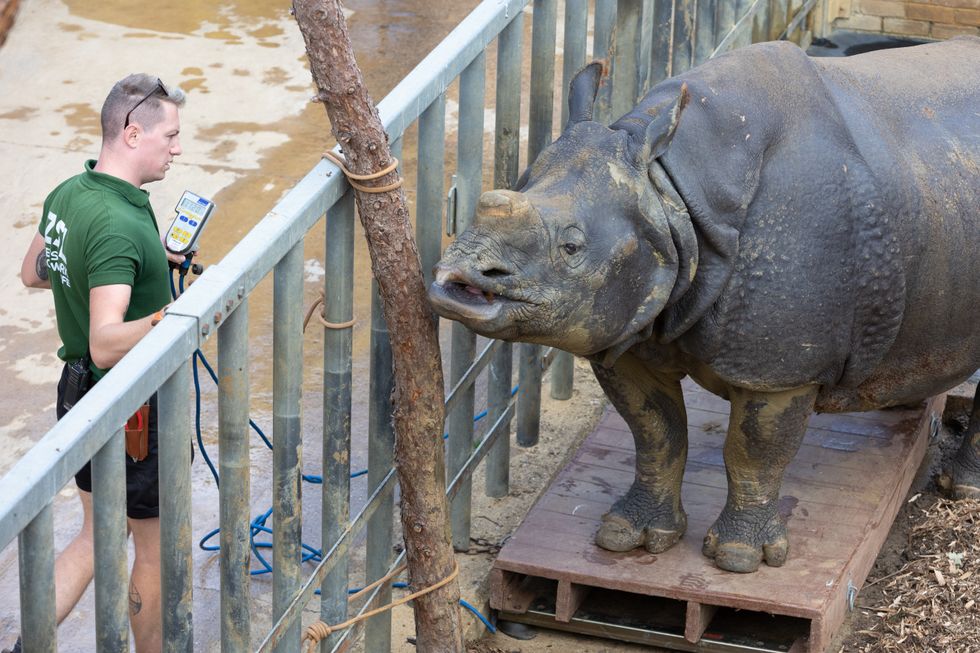 From weighing wolf spiders to measuring Ming Jung the 4,150kg Asian elephant, staff at the UK’s largest zoo have been carrying out their annual animal assessment.

The huge task saw Whipsnade zookeepers gently coax animals of all sizes, including aardvarks, rhinos and spiders to step onto the scales as they set about recording the vital statistics of the 10,000 residents.

One of the zoo’s larger residents, 26-year-old greater one-horned rhinoceros Beluki, stepped onto an industrial-sized weight scale after keepers enticed her with some fresh vegetables.

The zoo’s endangered Asian elephant called Ming Jung also had to be coaxed across the giant scales with the help of some of his favourite healthy snacks – where it was revealed that the 14-year-old weighs 4,150kg.

New arrival aardvarks Nacho and Terry took part in the annual weigh-in for the first time since they joined the conservation zoo.

Another first-timer was a three-month-old Northern rockhopper penguin called Dobby.

The endangered youngster, who hatched in May, was raised by keepers who hand-fed the chick when her parents proved unable to look after her.

Matthew Webb, the head of zoological operations, said the animals at the Zoo have “different personalities” which meant zookeepers have had to come up with “creative tactics” to entice the animals onto the scales.

“All of our animals at ZSL Whipsnade Zoo are weighed and measured regularly, but the annual weigh-in is an opportunity to review the information we’ve recorded and ensure it is up to date and accurate,” Mr Webb said.

“With so many animals with different personalities, the zookeepers have to come up with creative tactics to entice them onto the scales, from luring a 4150kg endangered Asian elephant like Ming Jung onto the scales in exchange for his favourite veggies, to encouraging a ring-tailed lemur to bounce onto the scales for a juicy, sweet pepper.”

As well as being a key tool to gauge the animals’ wellbeing, keepers can use the regular weight checks and waist measurements to identify pregnant animals, many of which are endangered species.

Once every animal’s weight and measurements have been recorded, the numbers are put in a database called the Zoological Information Management System (ZIMS) which helps zookeepers around the world compare important information on thousands of endangered species.

UK zookeepers ‘delighted’ by the arrival of endangered Asian elephant