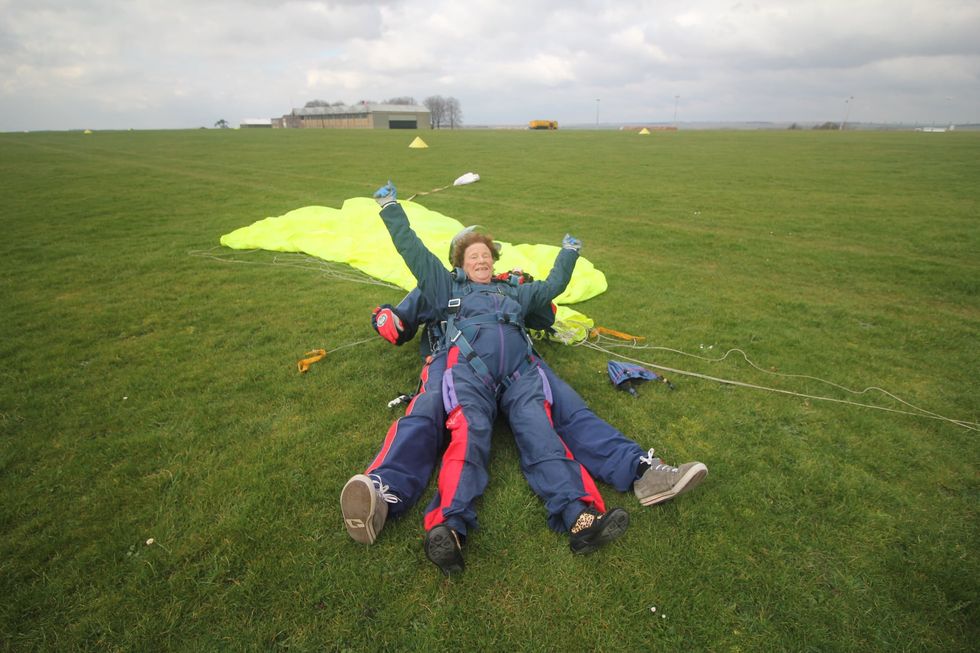 An adrenaline loving ninety-year-old who believes that life begins at 60 has encouraged others to not see age as an obstacle for going out of their comfort zone, as part of a campaign.

Mercy Baggs, who is based in Wiltshire, has teamed up with food delivery service Wiltshire Farm Foods and Dame Arlene Phillips to offer thrill-seeking over 55s the chance to tick off things on their bucket lists as part of its Wishlist Fund.

Following a surgery which was needed to remove two tumours in her spine in 2007 and left her struggling to walk, the determined former police officer went on to complete two skydives at the ages of 77 and 89.

She told the PA news agency that when she first found out about the chance to skydive, “I thought – I’d love to try it”.

“My husband wasn’t too keen, but the point is that I was 77 and I thought that my life was beginning to stagnate – nothing very exciting was happening – and I wanted to do something different.”

She said that the fact it was for charity added to her enthusiasm for the activity.

She also said the experience was “absolutely fantastic”.

“At first when the door opens, it is very cold – the wind was blowing us from side to side – but gradually you start to enjoy it.

“You’re literally skydiving and suddenly the parachute opens and you see everything below you and it’s an exhilarating experience like no other.”

She hopes that her adventurous nature will rub off on other over 55s to encourage them to not give up on certain things just because of their age.

“I don’t know why people just give up at a certain age.

“Life begins at 60 I believe and age is just a number.

“Never let anyone make you feel like you cannot do something because of your age because I don’t.”

For her 95th birthday, she hopes to prove the saying ‘third time lucky’ by taking on another skydive.

Dame Arlene Phillips said: “I’d love to see more people live out their lifelong dreams in their mature years and embrace the freedom that older age brings, and that’s why I’m working with Wiltshire Farm Foods to launch the Wishlist Fund. Life is for living, so live it!”

A Wiltshire Farm Foods spokesperson added that by stepping in to help get items ticked off people’s wish lists, the food company hope to “[facilitate] the older generation’s most cherished desires.”

Anyone who is interested in nominating themselves or someone else over the age of 55 for the fund can find more details at https://www.wiltshirefarmfoods.com/wishlist-fund

Please log in or register to upvote this article
skydivingWiltshire