BBC Breakfast’s Jon Kay gets ‘splatted’ by pigeon on air 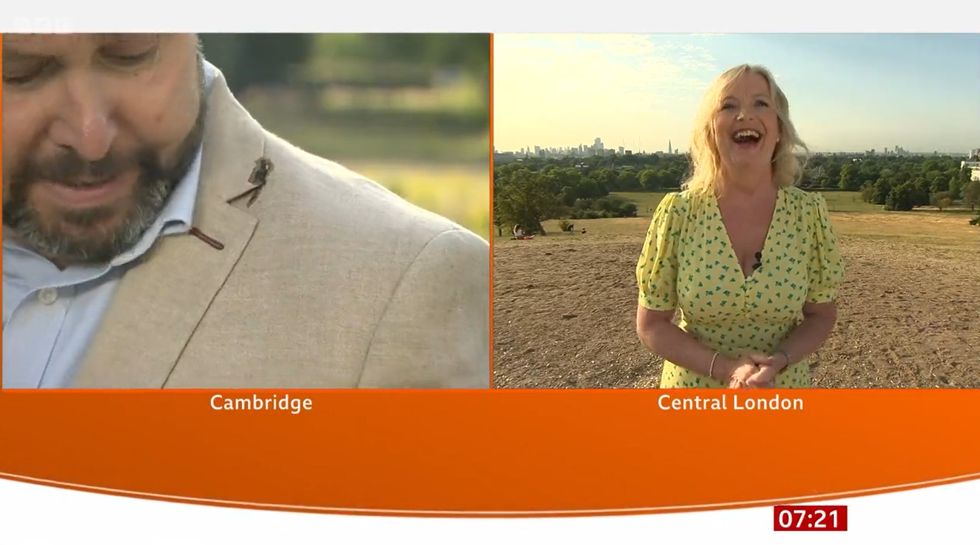 BBC presenter Jon Kay asked Carol Kirkwood if she had any tips on how to remove bird poo from a linen jacket after he got “splatted” live on air.

Kay, who was last week announced as the new regular presenter on BBC Breakfast from Monday to Wednesday, was presenting from Cambridge wearing a beige linen suit when the incident happened.

After asking weather presenter Kirkwood for her top tips on keeping cool during the heatwave, he said: “Carol, have you got any tips for removing bird poo from linen jackets? Because I’ve just been splatted by a pigeon…”

'Have you got a tip for removing bird poo from a linen jacket? @jonkay01 needs advice after an unfortunate accident… https://t.co/X72icWADIl
— BBC Breakfast (@BBC Breakfast) 1658125851

While going to wipe his jacket collar and asking: “Do I go in with the wet..?” Kirkwood suggested: “Try one of these wet wipes things, it might spread it a wee bit, but if you use a few…”

Hull-born Kay, 52, added: “It could get messy couldn’t it? I’m slightly anxious about doing this. I’ve also got another jacket – maybe we’ll go for that option for now and hit the the dry cleaners a bit later.”

As he ended his segment, he quipped: “I’m going off to dab my jacket and will try get that sorted, in the meantime, I’m just glad it wasn’t a swan, to be honest, it was just a pigeon.”

From the studio, presenter Nina Warhurst told Kay that while it may not feel like it, “that delivery is considered good luck!”

Kay changed into a dark jacket following the incident to present the rest of the programme.

Meanwhile, as the heatwave sweeps across England, Kirkwood’s tips for keeping cool were: “Keep hydrated, first of all, make sure you drink plenty of water, stay off the alcohol and the caffeine, if you can.”

Speaking just after 7am on Monday morning, Kirkwood added: “When it’s early in the morning, like now, open your windows and doors, let the cooler air in, but you’re going to have to close them again.

“Close your curtains to keep the hot air that’s coming our way right out, walk in the shade if you have to be out, avoid the hours of 11am-3pm and don’t leave animals or people in parked, closed cars… I think these would probably be my top tips, Jon.”