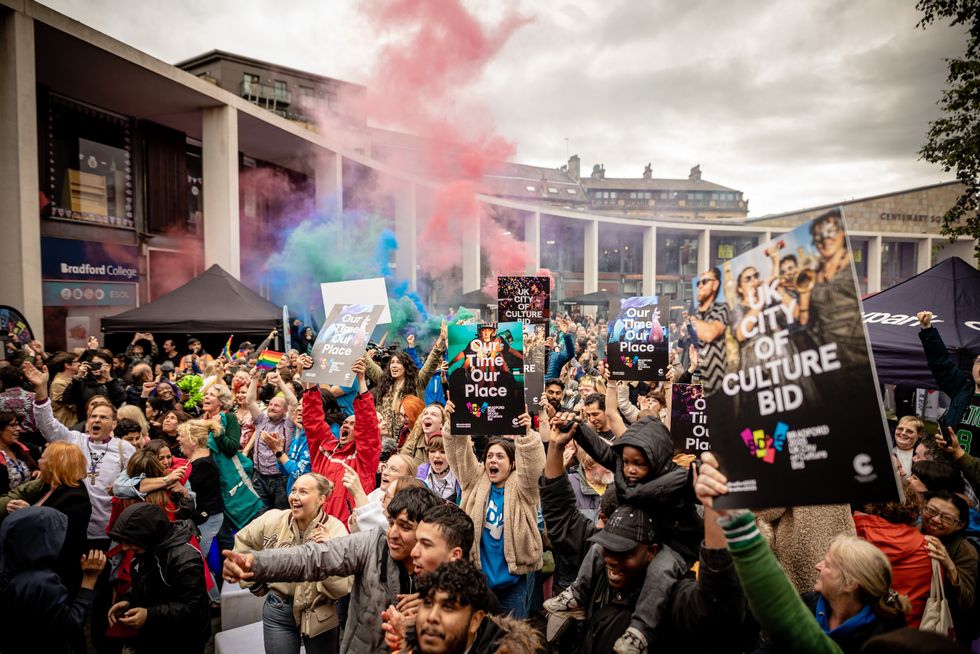 Bradford has been hailed for its rich history and diverse community as it was named the UK City of Culture 2025.

Prime Minister Boris Johnson said the win, announced live on television by Culture Secretary Nadine Dorries on Tuesday, builds on the “dynamism of the city”.

Ms Dorries, who revealed the winner on the BBC’s The One Show, said the standard of entries this year had been “phenomenal”.

Imran Hussain, Labour MP for Bradford East, told of his delight at the win, tweeting: “Bradford is beautiful, Bradford is brilliant, and Bradford is the now the #UKCityofCulture2025!!

“There really is no better place, and I’m beyond delighted that the Minister agrees with me.”

The Bradford 2025 official bid account on Twitter wrote: “This is our time to celebrate our extraordinary district – and for our young population to become leaders and change-makers to begin an exciting new chapter in our story.”

Bradford Council leader, councillor Susan Hinchcliffe, said the title “brings with it so many opportunities for people not only in terms of creativity and culture, but also for employment, attracting inward investment, boosting the local economy and opening up opportunities for young people to enhance their skills”.

Artist Shanaz Gulzar, the chairwoman of Bradford’s bid, said the area had been “overlooked and underestimated for so long” but now was its “time to shine”.

Ms Dorries said Bradford “thoroughly deserved” the win, tweeting that it had been “a joy” to make the announcement.

She wrote: “Thoroughly deserved and great news for this brilliant city.

“This IS your time to show off your rich history, diverse community and extraordinary people.”

Also tweeting his congratulations, Mr Johnson said: “This title builds on the rich history and dynamism of the city, bringing investment and opportunity for everyone who lives and works there.”

Labour leader Sir Keir Starmer said the win was “a huge success for a city built on rich history, art and culture”.

Robbie Moore, Conservative MP for Keighley and and Ilkley, part of the Bradford district, said the title will provide “an awesome economic boost for our area”.

Tracy Brabin, mayor of West Yorkshire, said: “I send my congratulations to all the team involved in this bidding process and I know the people of Bradford are ready to take this opportunity and shine on a national stage.

Those behind the bid estimated the UK City of Culture 2025 title could bring an extra £700 million into Bradford district, creating 3,000 jobs and attracting around 1.1 million visitors.

They said Bradford will receive £275,000 in initial seed funding as it develops its plans for 2025, which are set to feature more than 1,000 new performances and events including 365 artist commissions, a series of major arts festivals and major national and international collaborations.

Those involved in the campaign said the win is a “game-changer” for the district – which includes Bradford, Keighley, Ilkley, Haworth, Shipley and Bingley – and will put it “firmly on the national and international stage”.

Bradford has been named City of Culture 2025 (Alamy./PA)

A creative director and a managing director will be appointed this year to lead the delivery.

The shortlist was compiled from a record group of 20 that registered bids to take over the title from Coventry.

The advisory panel, chaired by Sir Phil Redmond, visited the four shortlisted places before making their final recommendation in May, which was later approved by Ms Dorries.

Michael Ockwell, who was on the Southampton 2025 City of Culture steering group, praised the work of the organising team for their own bid as “fantastic”, and congratulated Bradford on the win.

Mary Kelly Foy, Labour MP for the City of Durham, said it was “disappointing” not to win, but their bid had “highlighted the extraordinary cultural heritage of our county”.

The team behind Wrexham’s bid also congratulated Bradford on the win and said: “As a county, and as a community, this competition has brought us all closer together and helped us realise just how special Wrexham is.”

For the first time this year, the eight longlisted winners received a £40,000 grant to strengthen their applications. They included Cornwall, Derby, Stirling and Armagh City, Banbridge and Craigavon.

Since winning the title, Coventry has seen more than £172 million invested in music concerts and the UK’s first permanent immersive digital art gallery, as well as a further £500 million for the city’s regeneration, the Department for Digital, Culture, Media and Sport said.