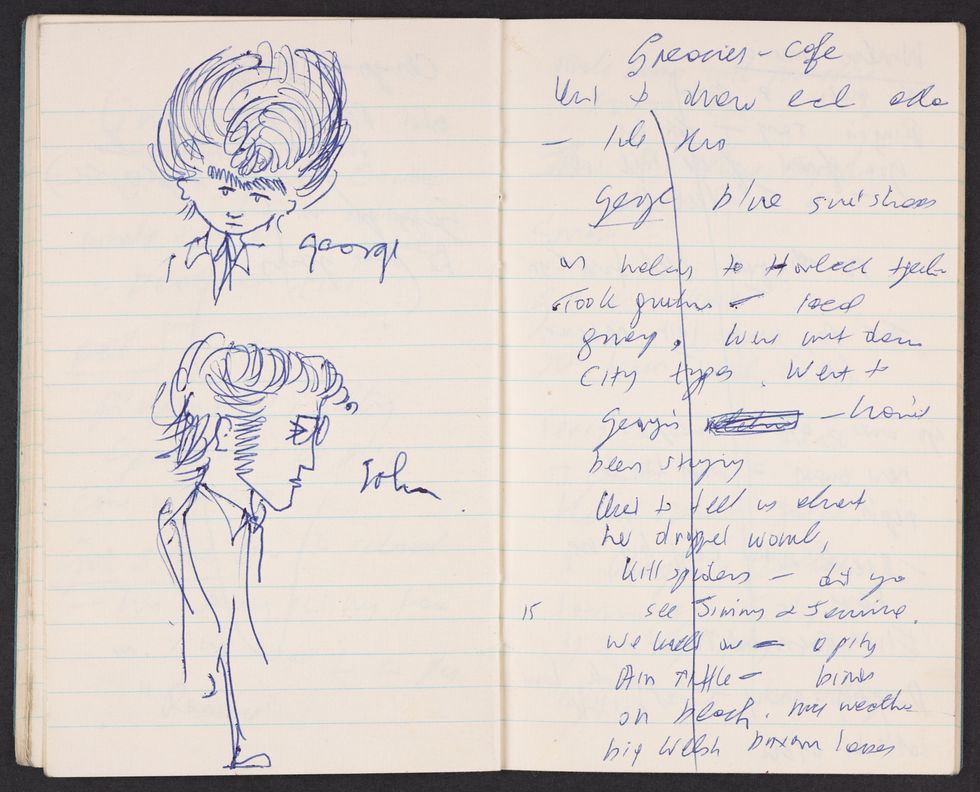 The British Library has acquired the private archive – containing notebooks, video and photographs – of Hunter Davies, the author of the only authorised biography of The Beatles to date.

Davies spent 18 months with the Fab Four and had unprecedented access to John Lennon, Sir Paul McCartney, George Harrison and Sir Ringo Starr as he wrote his 1968 book.

He was present at important moments in the band’s near decade together, including their performance of All You Need Is Love during Our World in June 1967, the first live global TV link.

The collection includes Davies’ notebook containing previously unseen sketches of Harrison and Lennon by Sir Paul, his typed drafts of The Beatles: The Authorised Biography with handwritten comments by Lennon’s Aunt Mimi, and Super 8 video footage of his family on holiday in Portugal with Sir Paul and Linda McCartney.

Also included in the acquisition are the typed notes of Brian Epstein, the Beatles’ manager, from 1962 on how the band should present themselves, including what they should wear, when in public.

The items will go on display alongside others relating to the Beatles at the Sir John Ritblat Gallery at the British Library in London.

Davies, also a journalist and broadcaster, said: “The further we get from The Beatles, the bigger they become.

“I never thought all these years later my scruffy notebooks would be of such interest – and I’m pleased that they’ll be made available to a wider audience of Beatles fans and researchers through the British Library.”

Greg Buzwell, curator of contemporary literary archives at the British Library, said: “We are delighted to have acquired Hunter Davies’ archive on his biography.

“His collection of notebooks, ephemera and photographs offers us a fascinating glimpse into the career of the Beatles at their peak.

“The archive also provides a unique record of how Hunter went about writing what remains the only authorised biography of the group.

“Given unparalleled access to John, Paul, George and Ringo, along with other influential figures in their lives, Hunter’s research notes for his book are an important addition to the Library’s collections, and offer a raw, first-hand perspective into how the Beatles became icons of 1960s counterculture and changed the face of popular music forever.”

To mark the acquisition, Davies will recall the writing of the biography and offer insight into his archive at an event at the British Library and online on November 11.