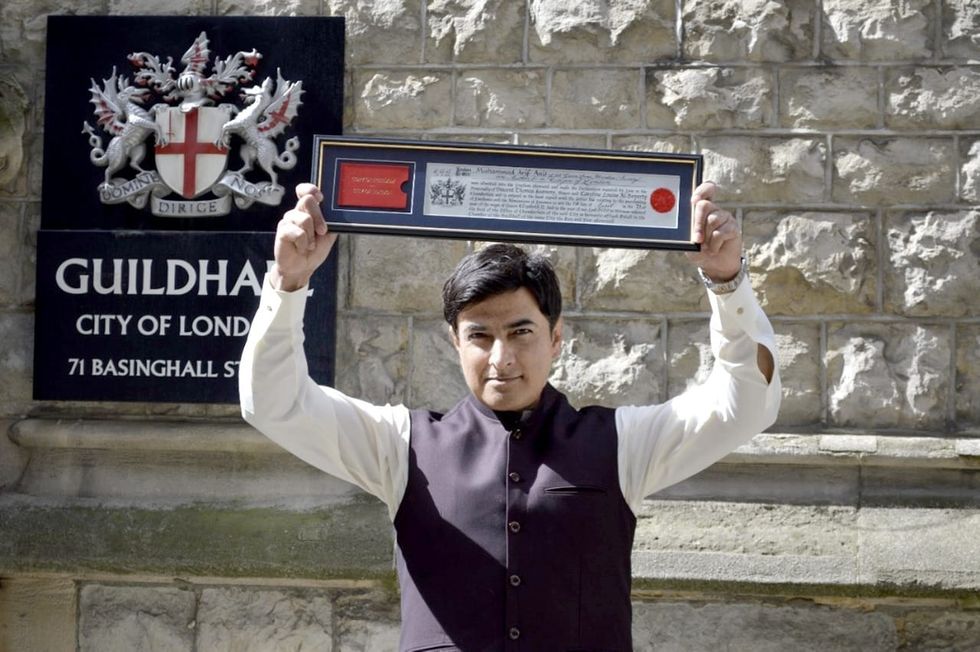 The co-founder of a campaign which delivered free hot meals to NHS staff, key workers and those facing a food crisis during the pandemic has become a Freeman of the City of London.

Arif Anis, who used to be a shepherd in Pakistan, helped launch the One Million Meals campaign in March 2020 in order to feed NHS workers as restaurants were forced to close during lockdown.

The volunteer-run initiative, backed by sports stars David Beckham and Amir Khan, delivered hundreds of thousands of warm meals to frontline workers across the UK from April to July 2020.

“Covid-19 has been a terrible time for most of us,” Mr Anis, a best-selling author and leadership development expert, said of the pandemic.

Arif Anis received his recognition with his wife and children at the Chamberlain Court, Guildhall (Freedom of City of London Award)

“However, this also has been a time when people held each other’s hands and stood shoulder to shoulder, rising above and beyond the call of duty.

“We have some extraordinary stories of persistence, perseverance, and sheer resilience to celebrate during these tough times… I am glad the One Million Meals is one of those stories and we managed to uplift the energies of our hero doctors, nurses, paramedics, ambulance drivers, key workers who were the first line of defence in those terrible days.”

A Freeman of the City of London is one of the oldest awards, believed to have been first presented in 1237, and is a status given to people who have achieved success, recognition or celebrity in their chosen field.

The medieval term “freeman” meant someone who was not the property of a feudal lord but enjoyed privileges such as the right to earn money and own land.

Additional rights associated with them, such as the right to drive sheep or cattle over London Bridge, are now considered symbolic.

“It’s unbelievable for someone who started around 20 years back as a shepherd in a remote part of Pakistan,” Mr Anis said.

“Now I have got shepherding rights to drive the flock on Tower Bridge as a part of privileges as a Freeman.”

Arif Anis, co-founder of One Million Meals, received his award at the Guildhall (Freedom of City of London Award/PA)

After a ceremony at the Guildhall in London, he dedicated the recognition to fellow founders, his family and all those who contributed to the campaign.

“The One Million Meals campaign was founded as a community response to the Covid-19 crisis.

“I dedicate the Freedom of the City of London recognition to the co-founders of the campaign, Suleman Raza, Bilal (and) Momin, my family, and countless volunteers who rose above and beyond the call of duty in the time of crisis.”

The Prime Minister also applauded the work of One Million Meals in May 2021 through the Points of Light Award, which recognised the founders of the campaign for their extraordinary services to the NHS, key workers, the homeless and people in need.

Please log in or register to upvote this article
Ethnic minorities