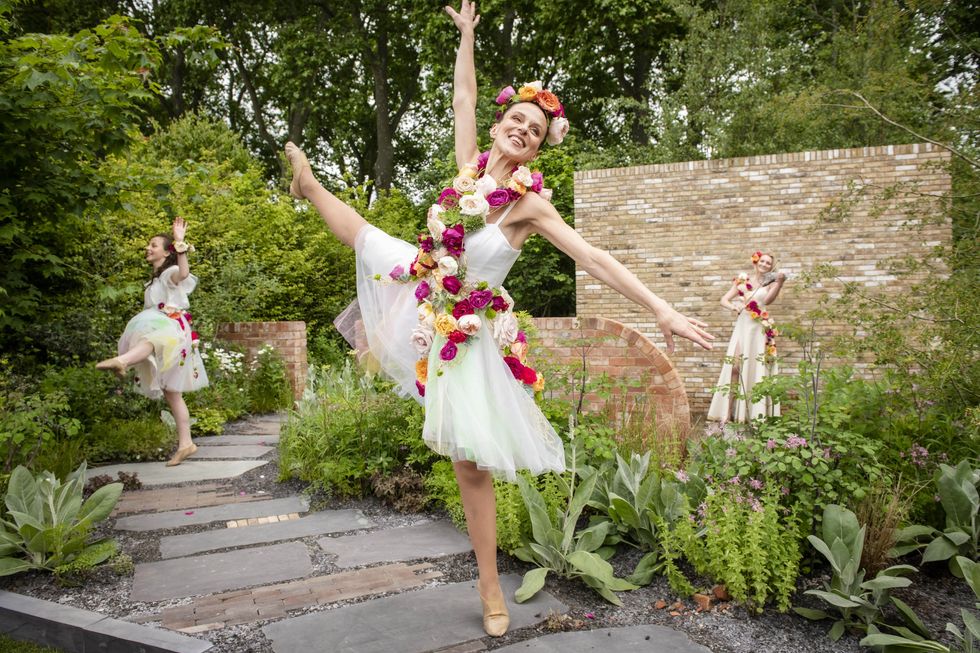 The Chelsea Flower Show has returned to its traditional May slot with gardens focusing on wildlife, wellbeing and floral displays to mark the Platinum Jubilee.

Celebrities and members of the royal family are getting a first look at the Royal Horticultural Society’s showpiece event on Monday, before it opens to members of the public.

Among the show gardens is a recreation of a beaver wetland, complete with a beaver lodge, dam, streams and natural wildflower planting.

Sara King, who leads on the rewilding network for Rewilding Britain, the charity the garden is in support of, said there were two reasons behind the exhibit.

“Beaver wetlands are absolutely incredible, and to bring a slice of that here – not many people can visit them as they’re still quite isolated – for people to experience and hear the soundscape is really incredible.”

And she said there was an ecological crisis and beavers were really good for boosting diversity and other wildlife.

While some people might see the wild-like garden at Chelsea as slightly messy, Ms King said “if we can allow some wilder areas within our gardens and parks and countryside it really will help nature bounce back”.

Garden designer and TV presenter Joe Swift has returned to the show with a garden for the first time in 10 years, designing a bee friendly-focused exhibit for the Royal Horticultural Society.

He said: “It’s really about raising the recognition that we all need to plant and think of our gardens as a refuge for bees, which are in great decline.

“There are 250 species of bees in the UK, and most of them are single solitary bees, that’s the ones we’ve got to really look after.

“It’s very simple, it’s planting pollen and nectar rich plants from early in the year to late in the year.”

The garden will be relocated to a London school after the show and is filled with foxgloves, perennial wallflowers, verbascum, allium and other blooms, as well as shallow water and bee houses which can be taken apart and cleaned.

Ainsley Harriott was seen helping his sister after she fell into the water feature on the bee garden as they visited the Chelsea Flower Show.

The TV chef later tweeted his thanks to other people who helped her after her fall, and said: “She’s doing fine and all is well.”

Environment minister Rebecca Pow was at the show to announce a new push by the Government to support bees and other pollinators, including raising awareness among gardeners.

“Gardeners can play as crucial a role as our farmers and landowners,” she said.

Asked what gardeners can do, Ms Pow said: “Just some really simple things, leave some bits of your lawn long. I’ve just done this in a patch and it’s quite remarkable what comes up even from the seeds that are there.”

She highlighted dandelions and daisies, which people used to spray but were good sources of nectar, as well as trefoil, clovers and other plants.

And the minister urged gardeners to plant things that will flower for as many months as possible across the year.

The Government is also highlighting a new “FIT Counts” app for people to do a simple 10-minute survey of the numbers of insects in their garden, road verge or community allotment.

Asked about the Government’s temporary approval of neonicotinoid pesticides for sugar beet, which are linked with declines in bees, Ms Pow said the wider context was moving away from pesticides in crops.

And quizzed on the rising use of artificial grass, the minister acknowledged it had its place, such as low maintenance gardens, but encouraged people to have plants, lawns and healthy soil for wildlife, to engage children with nature.

She also said healthy soil and plants were important for protecting against flooding.

Ms Pow added that artificial lawns were “not something I would encourage. I can see there’s a place for it, for certain functions: low maintenance, health issues, and kids”.

“But I would say there are so many wider benefits of having flowers, lawn and healthy soils, you’re doing much more for saving the planet, and your own health and wellbeing.”

The Mind Garden focuses on connecting with other people for mental health and St Mungo’s Putting Down Roots garden focuses on a programme to help people recover from homelessness through gardening.

Broadcaster and writer Monty Don said he hated gardening as a child in a speech to the Royal Horticultural Society, but said it had become a passion and was key to wellbeing and bringing people closer to nature.

Brewin Dolphin’s garden highlights how brownfield land can be rehabilitated with planting that cleans up polluted soil and air and boosts wildlife, as inspiration for gardeners in new homes built on poor brownfield soils.

A floral display with the profile of the Queen in Platinum Jubilee purple marks her 70-year reign.

It is covered on both sides with an assortment of native British-grown tree branches with connecting inner shelves arranged with 70 terracotta pots planted with lily of the valley, one of the monarch’s favourite plants.

Another installation aims to transport visitors to one of the Queen’s favourite places, with a canopy of flowers including fresh delphiniums, emulating the colours and planting of the Scottish landscape near the royal family’s Balmoral Castle estate in Aberdeenshire.

The Chelsea Flower Show is back in its May slot for the first time since 2019, after being cancelled in 2020 and moved to September for 2021 due to the pandemic.

Swift said it was good to see the flower show return to May after last year’s September show.

“It was great for a one-off, and September was gorgeous, it showed a different palette of plants and it worked really nicely,” he said.

“I’m not sure you would want it every year, so it’s nice to have it back in May.”