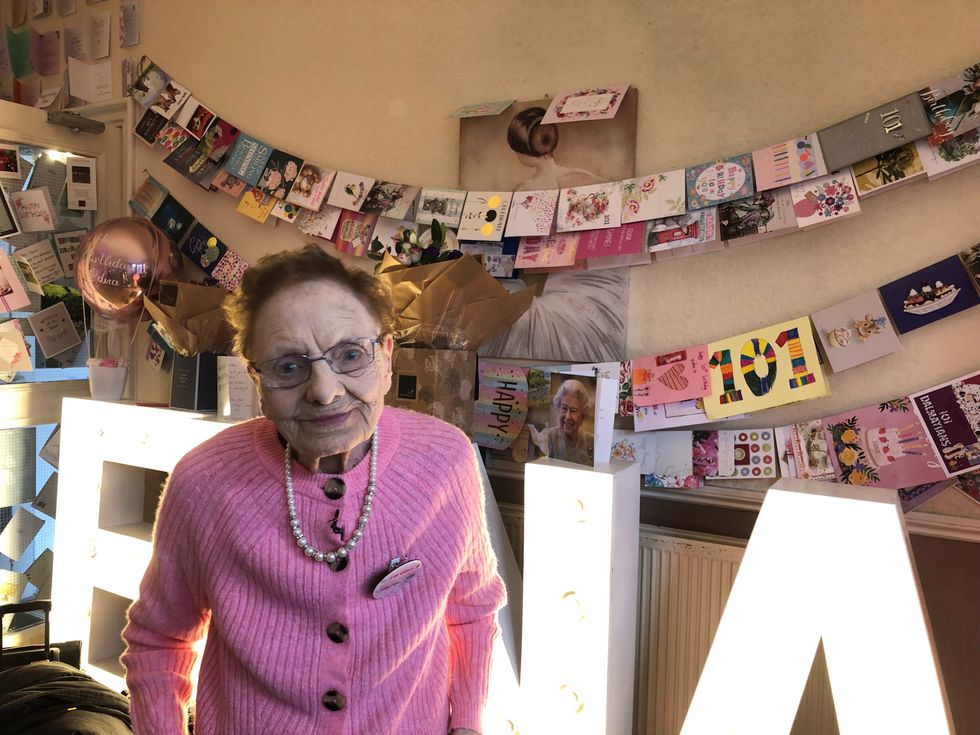 A centenarian said she has had the best day of her life as she celebrated her 101st birthday surrounded by more than 30,000 cards sent following an online appeal.

Edna Clayton missed out on celebrations for her 100th birthday last year, when she was still living independently, due to lockdown and did not receive a card from the Queen.

Mrs Clayton has since moved into Hector House care home in the Shawlands area of Glasgow, where manager Angela Todd was keen to give her a birthday to remember this year and posted an appeal for cards on social media.

They have been overwhelmed by the response with more than 30,000 cards flooding in from around the world.

Edna spent time with her son James on her birthday (PA)

Celebrities including David Tennant, Michael Sheen, Zoe Ball, and John Gordon Sinclair have sent birthday wishes, as did the Texas fire department and the President of Luxembourg, while Mrs Clayton received a card from the Queen and Prime Minister Boris Johnson sent a letter.

She said: “I’ve had a wonderful day, the best of my life, great, all the attention, all the care, what more could anyone ask for.”

Asked whether there were any secrets to a long life, she said: “There’s no secret, I take each day as it comes.”

Sir Billy Connolly also sent a video message to Mrs Clayton via BBC Scotland, saying: “I’d like to wish you a happy birthday. A hundred and one – that’s spectacular. Well done!”

The 101-year-old lived for many decades in the Battlefield area of Glasgow and was a carer to her son James, who has Down’s syndrome and now lives in sheltered accommodation.

From every corner of the world she's had cards saying what an inspiration she has been as a mother, it's been lovely

Ms Todd said: “When Edna first came to us she told us that on her 100th birthday she hadn’t received her card from the Queen. So with her 101st approaching, we knew she had a very small circle of family and friends, we thought let’s put a wee appeal out to the folk of Shawlands and ask kids to make cards and things like that, get some cards through the door.

“The post just went viral and we’ve received cards from all over the world. we are sitting at over 30,000 cards at this moment in time, flowers, parcels everything.

“She did get the card from the Queen this morning and also a letter from the Prime Minister so she is over the moon about that.”

She added: “From every corner of the world she’s had cards saying what an inspiration she has been as a mother, it’s been lovely.”

Mrs Clayton’s son James, now in his 50s, joined her to celebrate her birthday on January 31 and they also enjoyed a trip around Glasgow on a party bus.

Ms Todd said: “She brought him up on her own since her husband passed away some 30 years ago.

“Her life has been devoted to her son, he means so much to her so it meant a lot to her to see her today.”