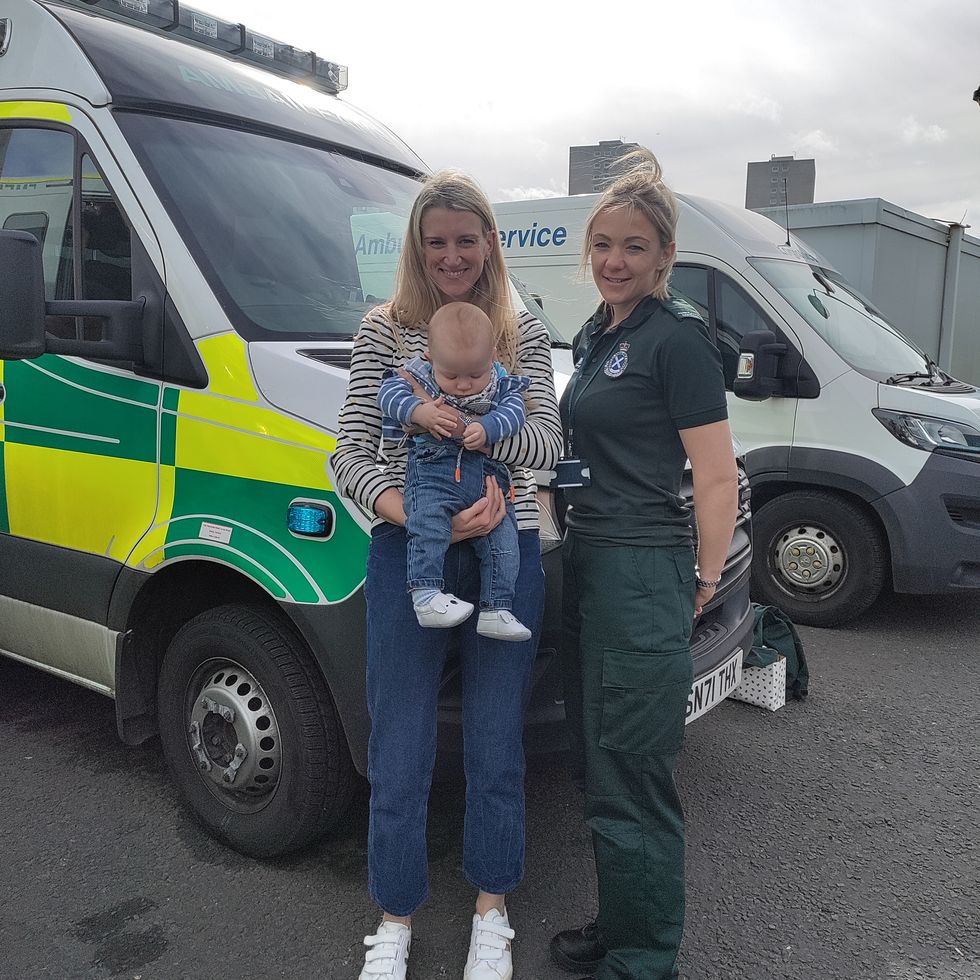 A couple have praised the ambulance call handler who helped them delivery their premature baby while on holiday in Scotland, describing the emergency service worker as part of their “family story”.

Alex Clayton was 34 weeks pregnant when she went into labour at the holiday cottage in Fife where she had been enjoying a break with husband Tony and their son Max.

Speaking as they met call handler Lorna Milward for the first time, Mr Clayton recalled how he was “terrified” when he realised his wife was giving birth in the holiday rental in Ceres in June 2021.

The family, from Yorkshire, had been recovering from a bug when Mrs Clayton woke in the night feeling unwell.

After going to the bathroom, she realised her waters had broken and the baby was half-delivered breech and that his head was stuck.

If it wasn’t for Lorna, I don’t think Fraser would have made it

Ms Milward, who was based at the ambulance control centre in Inverness, was “cool, calm and collected” when they called 999 for help, Mr Clayton said.

She talked him through how to deliver the baby boy, who the couple named Fraser, and then guided him through the resuscitation process after the infant was born unresponsive.

Paramedics arrived and the family were taken to Victoria Hospital in Kirkcaldy, with Fraser spending a week in intensive care before he was declared well enough to go home.

Mrs Clayton recalled: “It all happened so quickly, but I just remember how Lorna was so good at giving directions to us over the phone.

“If it wasn’t for Lorna, I don’t think Fraser would have made it.

“We hope we can stay in touch and keep her up to date with how he’s doing, as she is now part of our family story.”

Mr Clayton said: “When I realised what was happening I was terrified and felt utterly out of my depth.

“Lorna was the very opposite – cool, calm and collected, she was able to talk me through something which I would never have been able to do without her on the end of the phone. We will be forever grateful to her.”

Ms Milward was given a commendation for her actions by bosses at the Scottish Ambulance Service after helping to deliver the youngster.

She met the family at Edinburgh ambulance station, where big brother Max was also given the chance to see inside an ambulance.

It was a traumatic, life-changing moment for both Alex and Tony, so I knew I had to keep them calm and deliver the instructions on what to do

She said: “I was always wondering about them, so I was pleased to get the chance to be able to meet them in real life.

“Once you are finished with a call you go straight onto the next one, so it was amazing to find out what happened, and to meet Fraser. ”

Speaking about the delivery, she added: “Alex did so well. It was the first time a call like this had come through for me, and when I realised it was a breech birth at home, that the baby was the wrong way round, I knew that it would be challenging.

“It was a traumatic, life-changing moment for both Alex and Tony, so I knew I had to keep them calm and deliver the instructions on what to do, until the paramedics arrived.

“Alex and Tony worked well together which was vital in the safest delivery and care of Fraser, given the traumatic circumstances.”

Everything you need to know about the government's anti-strike bill

Doctor says his hospital is using corridor as an emergency department

Please log in or register to upvote this article
NHS

Among Us accidentally committed a 'war crime'

among us
gamingvideo gamefunnyfunamong us

A firefighter used a Grenfell Tower photo on his Tinder profile