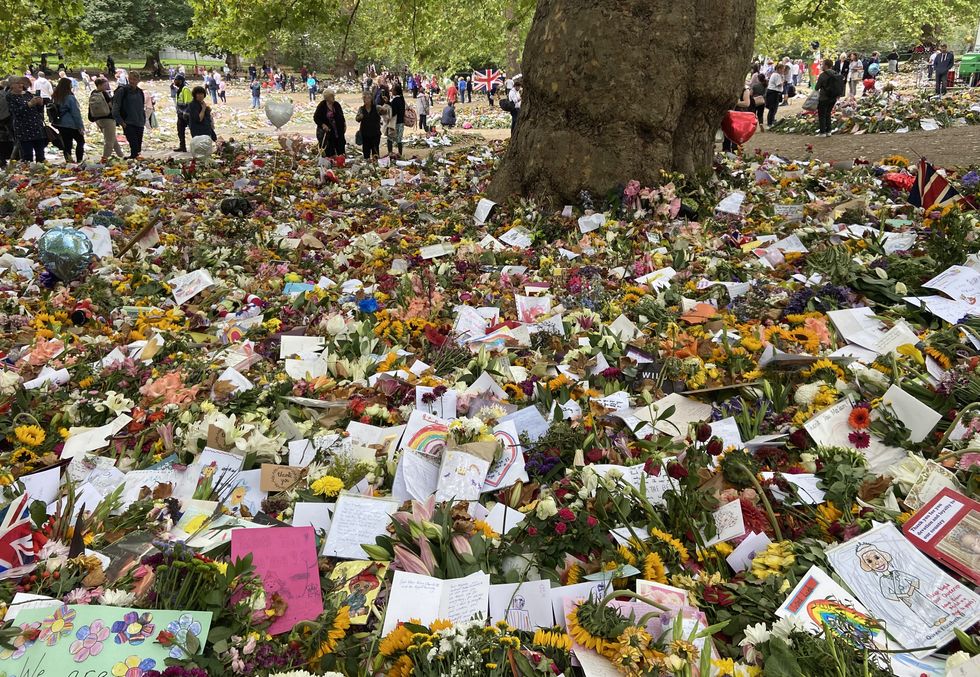 Floral tributes to the Queen will be composted and given a new lease of life in planting projects throughout the Royal Parks.

It is expected that work to remove items laid by the public will begin on Monday, a week after the state funeral, and will continue for seven days.

Visitors will still be able to lay tributes but blooms which have already deteriorated will be moved to the Hyde Park nursery.

Once taken away, any remaining packaging, cards and labels will be removed, before the plant material is composted in Kensington Gardens.

The compost will then be used on landscaping projects and shrubberies across the Royal Parks.

Sue Tovey, 57, from North Wales, travelled to the tribute site in Green Park to leave flowers with her husband and her granddaughter.

Commenting on the compost plans, she said: “I think it’s amazing because so many people have brought things down and I love how they’ve gotten rid of all the Cellophane and actually just got the bouquets. It’s beautiful, really moving isn’t it?”

Mrs Tovey said her three-year-old granddaughter loves the Queen, and that her favourite song is the national anthem.

She said: “We’re all gardeners anyway so it’s a lovely touch that this will go and get used in Royal Parks, which is fantastic. There’s going to be a lot of compost here I would’ve thought.”

Sharon Warner, a 52-year-old property administrator from Enfield, London, travelled to the tribute area in Green Park with her mother.

Ms Warner said: “Yeah, it’s an amazing feeling the fact that they think about it in advance of what they’re going to do to benefit all of this, because it will be lovely for it to be reused.”

Her mother, Sue Robinson, 75, from Barnet in London, said: “The planning that’s gone into this is just amazing, so that’s great to hear that.”

In terms of other tributes, a spokesperson for the Royal Parks said: “Our priority at the moment is to manage the huge volume of flowers and tributes that are being left in the Green Park Floral Tribute Garden.

“We will store any teddies and artefacts that have been left and will work closely with our partners to agree what we do with them over the next few months with discretion and sensitivity.”

Portsmouth Council has announced plans to plant a memorial tree in Victoria Park next year, using compost made from the floral tributes left at the Guildhall following the Queen’s death.

People are impressed that King Charles, 73, could march the procession

Please log in or register to upvote this article
QueenRoyalRoyal Parks