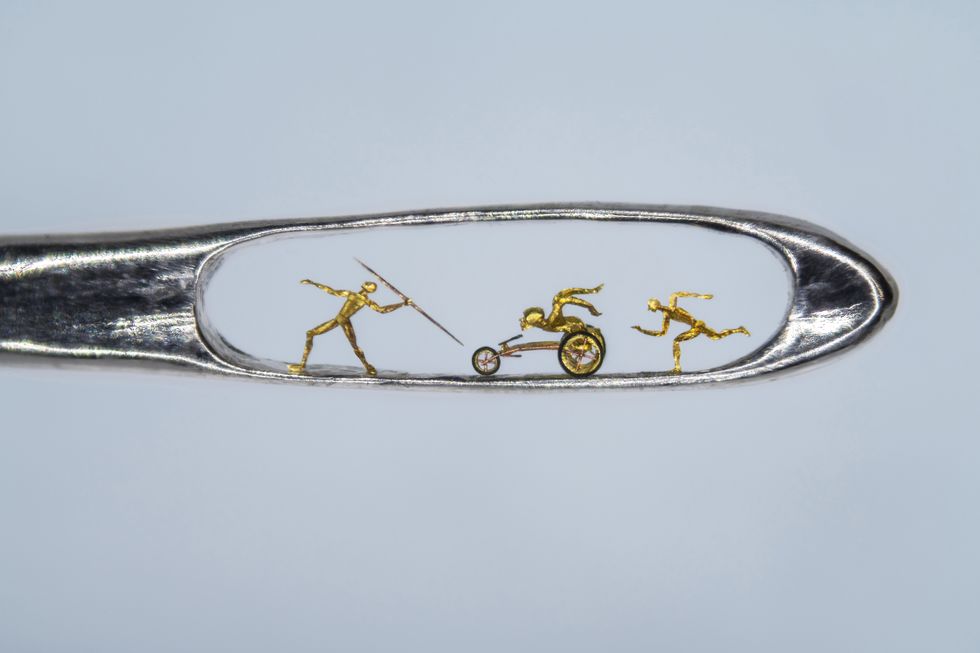 A pair of artists whose work can only be enjoyed through the lens of a microscope have teamed up to create tiny tributes to Commonwealth Games athletes competing in their native city of Birmingham.

Dr Willard Wigan, a micro sculptor, and Graham Short, a micro engraver, have each used their particular skills in a nod to competitors currently entertaining the crowds.

Dr Wigan, 65, has created two pieces: Aim for Gold and Point of Glory – a personal tribute to Team England triathlete Katerina Johnson-Thompson, who has since gone on to win triathlon gold in the Games.

Both designs have each been fixed within the eye of a needle and include details such as the tiny “KJT” on the back of Johnson-Thompson’s vest and the 24 carat gold tip of her javelin.

Dr Wigan said it was a tribute “in the smallest, biggest way”.

“Every single athlete taking part is a winner, by taking part, and I wanted to reflect that – and I just knew Katerina Johnson-Thompson was going to win gold,” he added.

Meanwhile, Mr Short, who previously engraved the Lord’s Prayer on a pin, has inscribed the names of all 72 competing nations – 636 characters in all – onto the 2mm head of a gold pin.

All 72 Commonwealth Games competing nations on the head of a gold pin, 2mm in diameter (Graham Short/PA)

Both men – by coincidence – live less than a mile from each other in south Birmingham, and discussed paying their special tribute to the Games about six months ago.

Mr Short said: “Willard has been a friend for years, and then we had the Commonwealth Games coming to Birmingham.

Mr Short took two months engraving the nations on the pin, adding that one slip or “mistake”, meant he had to polish the head clean and start again.

He uses an ordinary clothiers’ needle, wedged into a wooden engraving handle, and with the point sharpened with an oil stone “until it’s so thin I can barely see the end”.

The key to a steady hand comes from “working between heartbeats” as Dr Wigan said.

“We both work in similar ways, lowering our heart rate – working dead still,” he added.

Mr Short also has three-monthly Botox injections around his eyes to stop twitches which might upset the delicate work, which requires many hours of intense concentration – one of the reasons he works only at night, when there’s no traffic to disturb him.

The 76-year-old planned out his engraving on a reference drawing, but marvelled at Dr Wigan’s ability to “look once at something and remember it” for his sculptures.

For his part, Dr Wigan said: “The work isn’t enjoyable. Once you make a mistake you have to start all over again – it doesn’t forgive you.

“It takes 16 or 17 hours a day: sometimes starting at 6am and finishing at 8am the next day.

“You need patience, and you can’t get angry.”

He added: “The reward is when people see it, they just say ‘oh my God’.”

Dr Wigan is intending to exhibit his creations through microscopes, together with up to two dozen other pieces of his work, at Millennium Point in Birmingham, once the Games have finished.