Police and crime commissioner ‘gobsmacked’ by support for cycling challenge 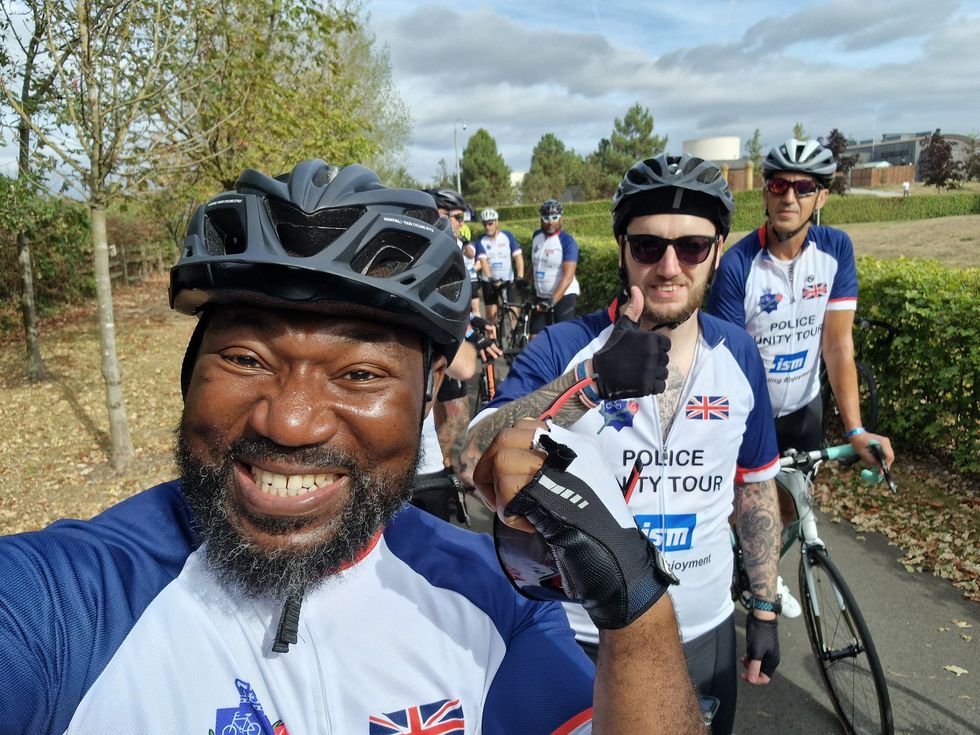 A police and crime commissioner who took on a cycling challenge has said he is “gobsmacked” after exceeding his fundraising target for a charity which provides support to bereaved family members of police officers killed on duty.

The UK Police Unity Tour is an annual cycle which aims to raise funds for charity Care of Police Survivors (COPS), which support families of police officers who have lost their lives on duty.

The cycle took place from August 19 to August 21, with more than 300 cyclists from different police forces including Essex, Leicestershire and Bedfordshire taking part.

Festus Akinbusoye, the elected Police and Crime Commissioner (PCC) for Bedfordshire told the PA news agency that he decided to join the cycle after attending the funeral of Andrew Harper in 2019. Mr Harper was a Thames Valley police constable who was killed near Sulhamstead, Berkshire in the line of duty.

“Listening to his wife speak at that funeral was a very moving experience. It just opened my eyes a lot more to the real dangers that these men and women face every day,” said Mr Akinbusoye, 44.

“The reality is that there are very few jobs in this country where people can leave their home in the morning and they cannot guarantee that they can come back – policing is one of those jobs.”

When Mr Akinbusoye found out about the cycling tour, he wanted to “give it a try” due to the support COPS gives to the bereaved families of officers, even though he admitted: “I am not a cyclist at all.”

However, over the course of the three days, he has cycled more than 200 miles with a team of around 15 fellow cyclists from Bedfordshire.

As part of the cycle, each participant gets a blue band that is “in memory of a police constable” and the name of the police force and when they died can be found on the band.

“I rode for a guy called John Simmons who died on the fifth of August 2006 and was in the Bedfordshire police force,” he said.

“I have his band with me and I will be giving it to his parents later on this week because they could not make it to Staffordshire today.

“I did not know who John Simmons was, but now I feel like I do because I have learned his story and I’m hearing from officers who said that he was a genuinely nice, chirpy guy.”

Each force taking part in the cycle had a different starting point depending on where they are based, but the final location was the same – The National Memorial Arboretum in Staffordshire. A memorial service was held to end proceedings.

“Something that has really stuck with me was that during the memorial service today, I saw myself surrounded with many hundreds of police officers and their families – some of them I knew and some I have been riding with over the past three days,” he said.

“That would break my heart because they are just doing their jobs and policing is a very tight-knit family in many ways and when one gets wounded, that ripple effect is so massive within the force.”

The PCC planned to raise £500 but achieved more than double that and said he was “gobsmacked” because of the support.

“I’m so humbled by the pennies and pounds that many have contributed and I have no doubt that is going to go to good use because I actually got to see it for myself,” he said.

“I got to speak to some of the beneficiaries and look in their eyes and they told me how much support they have received from COPS and how much it means to them to see hundreds of police officers and supporters cycling for them.

“It was a very powerful moment that I will never forget.”

Roughly £1.1 million has been raised over the 10 years the event has taken place and a house was purchased which provides respite housing for affected families.

Please log in or register to upvote this article
charityPolice