Queen in comic sketch with Paddington Bear at Jubilee concert 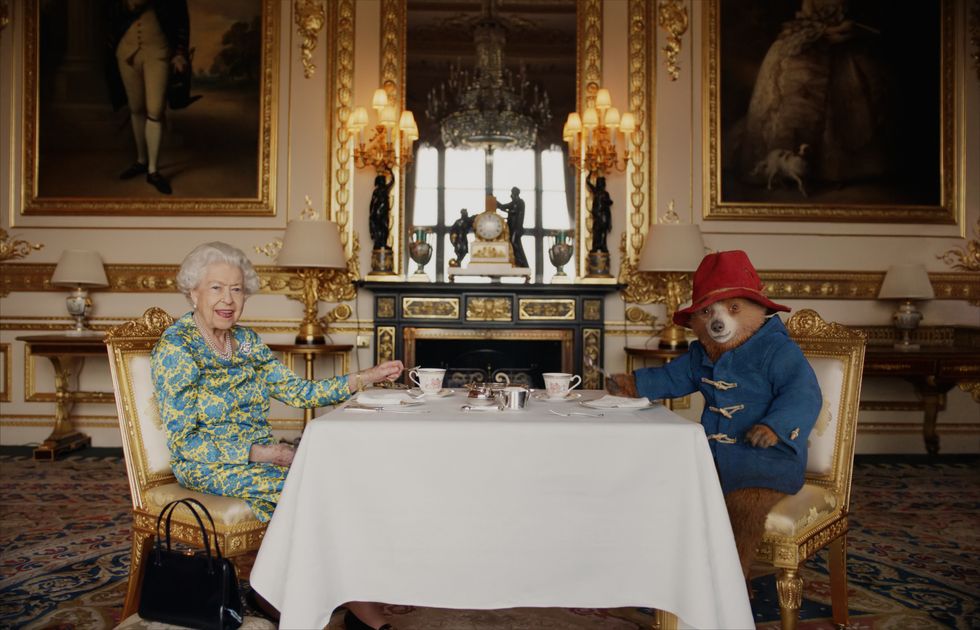 Paddington bear and the Queen

The Queen has delighted millions of viewers by appearing in a surprise comic sketch with Paddington Bear to kick-start the Jubilee concert.

The monarch and the famous bear – both much loved British institutions – tapped out the beat of the We Will Rock You anthem together on china teacups using silver spoons as a unique way of getting the celebrations under way.

With the special, secretly-pre-recorded humorous two-and-a-half-minute sequence played at the start of the televised BBC’s Platinum Party at the Palace, the unlikely duo set the rhythm for opening act Queen + Adam Lambert – who joined in on the main stage.

Elizabeth II and the digitally animated character met for a chaotic cream tea at ‘Buckingham Palace’ in the footage, with the Queen revealing she shares Paddington’s love of marmalade sandwiches and keeps an emergency stash in her trademark handbag.

The duffle-coat wearing bear showed the Queen how he ensured he always had his favourite treat on him just in case, lifting up his red hat to reveal his snack.

The Queen responded by revealing “So do I” before opening her bag and declaring “I keep mine in here” to show her very own ready-made supply of the bread and orange preserve staple.

Accident-prone Paddington was shown causing mayhem by accidentally depriving the understanding sovereign of another cup of tea and spraying cream from a chocolate eclair over a Palace Footman.

The bear from deepest darkest Peru congratulated the Queen on her reign of 70 years, saying: “Happy Jubilee Ma’am. And thank you. For everything.”

It brought back memories of the Queen’s James Bond skit for the London 2012 Olympic opening ceremony, when the monarch met 007, played by Daniel Craig, and then appeared to parachute into the stadium, with the help of a body double.

Paddington and the Queen were pictured sat opposite each other in ornate chair at a table, laid for afternoon tea, covered with a white linen cloth in an opulent room.

Buckingham Palace said the Queen felt the opportunity to invite Paddington to tea was “too fun to miss”.

The Palace said: “Her Majesty is well known for her sense of humour, so it should be no surprise that she decided to take part in tonight’s sketch.

“There was an interest in the filming and animation process and the opportunity to invite a famous bear to tea was just too much fun to miss.

“While The Queen may not be attending the concert in person, she was very keen that people understood how much it meant to her and that all those watching had a great time.”

The film was kept under wraps for several months by Buckingham Palace, BBC Studios and Heyday Films/StudioCanal.

Actor Ben Whishaw voice Paddington, just as he did in the hit movies of the children’s story.

Those involved in the film, which was actually shot at Windsor Castle, praised the Queen’s wit and warmth during the process, saying she shone and put them all at ease.

Mark Sidaway, executive producer for the BBC’s Platinum Party at the Palace said: “We were thrilled and honoured when we learned Her Majesty had agreed to run with this touching yet joyful idea the team had come up with – although it was slightly nerve-wracking ensuring it all blended seamlessly with the live performance from Queen + Adam Lambert.”

Rosie Alison of Heyday Films said: “Filming Her Majesty’s tea party with Paddington Bear was such an emotional day for the entire crew.

“All of us were in awe of the Queen’s wit, warmth and radiant aura as she patiently engaged with a polite, clumsy but very well-intentioned bear.

“Of course, she shone, and put Paddington (and all of us) at ease. Capturing this lovely encounter was an absolute joy and unique privilege for the whole team.”

Anna Marsh, chief executive of StudioCanal, added: “Filming with Her Majesty and Paddington Bear at The Palace is a memory we will all cherish.

“Her Majesty’s warmth and generosity was a joy to behold. And who better to thank Her Majesty than Paddington, over a pot of tea, a marmalade sandwich, and with a touch of chaos. Aunt Lucy would be proud.”

Paddington, created by late British author Michael Bond, and the Queen share something in common – they both have two birthdays.

When Paddington was adopted by the Brown family, they agreed that bears, “just like the Queen”, have two birthdays every year.

The Queen’s actual birthday is on April 21, but she has an official one each year in June. Paddington’s birthday are – on June 25 and December 25.