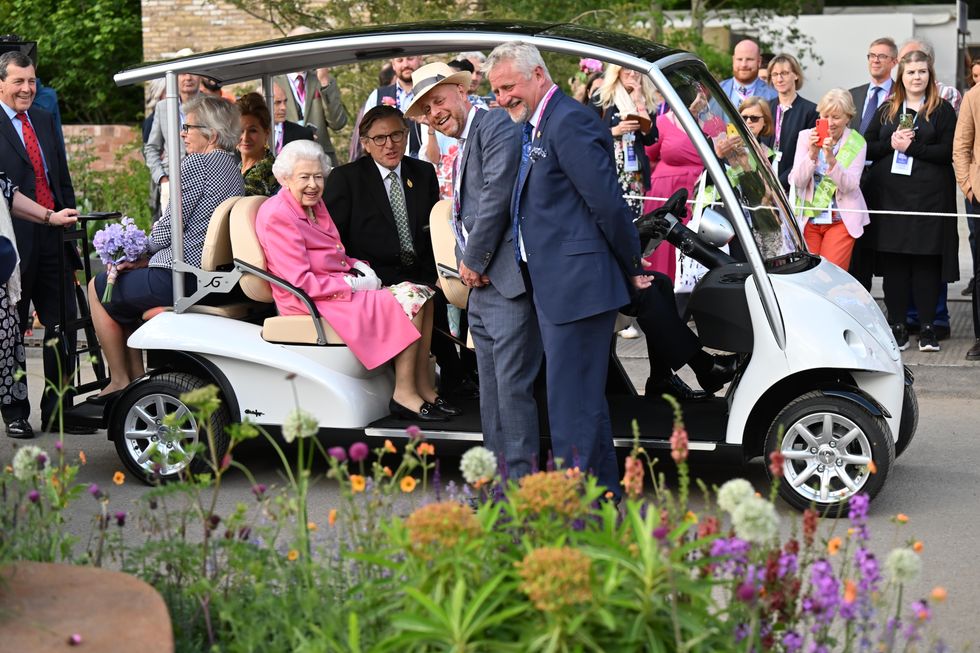 The Queen toured the Chelsea Flower Show by buggy enjoying the creations of some of the world’s top garden designers from the comfort of the back seat.

With her stick by her side the Queen, who has mobility issues, sat back and was driven around in a Royal Household electric vehicle by a chauffeur in a peaked cap, from the monarch’s staff.

Keith Weed, president of the Royal Horticultural Society (RHS) which stages the event, sat beside the monarch and gave her a running commentary of the many gardens she stopped to view and introduced her to gardeners and sponsors.

Juliet Sargeant was stood beside her design for the new BBC Blue Peter garden as she chatted to the Queen, and said later about her visit by buggy: “It’s great, the same with anybody with mobility issues it’s just great to find a way to do what you love.

“And, as we’ve been told, she loves gardens and it’s a great way for her to be able to pursue her passion.”

The six-seater buggy made its public debut as other members of the royal family toured the site at the Royal Hospital Chelsea in London by foot, including the Earl and Countess of Wessex and Princess Beatrice and her husband Edoardo Mapelli Mozzi.

Sat at the rear with their backs to the Queen was the RHS president’s wife Kate Weed and a lady-in-waiting who held a number of bouquets given to the Queen.

Buckingham Palace confirmed the vehicle, which was built by Danish firm Garia, was a Royal Household buggy.

The Sun reported in March that the Queen had taken delivery of the new £62,000 luxury golf buggy, which has a lithium battery, leather seats and bluetooth speakers, to help her get around Windsor.

It is the first time in nearly a decade that the monarch is believed to have used a buggy at an official engagement.

The Queen was seen in a golf buggy nine years ago in 2013 during the Coronation Festival in the gardens of Buckingham Palace.

She also used one during a tour to Australia in 2011, when she visited Government House in Canberra.

A Buckingham Palace spokeswoman said: “Adjustments have been made for the Queen’s comfort.”

Monty Don, the BBC Gardeners’ World presenter, chatted to the Queen about filming the popular television series during lockdown with remote cameras, saying “it was quite odd”. The Queen replied: “I’m sure.”

As the Queen sat in the buggy, wearing a Stewart Parvin pink lemonade coloured coat and a silk ivory dress, they talked about people turning to gardening during the pandemic.

Other members of the royal family, including the Earl and Countess of Wessex, also toured the show (Dan Kitwood/PA)PA Wire/PA Images - Dan Kitwood

During her tour she stopped at the Hands Off Mangrove garden by Grow2Know, which aims to highlight global deforestation and racial injustice.

She asked co-designer Danny Clarke how long it took to create. “Two and a half years,” he replied. “Covid helped!” she laughed.

At a display in memory of the broadcaster and Chelsea regular Peter Seabrook, who was The Sun’s gardening columnist for 45 years until his death in January, she was given a bunch of lilac sweet peas named after Seabrook by Molli Christman, Seabrook’s former apprentice.

Her mother Val Christman, who worked with him for 25 years, said: “Every year Peter grew sweet peas. He would bring a posy to present to the Queen.”

The Queen also spoke to the renowned clematis grower Raymond Evison and as she was introduced by the RHS president, she said: “We wouldn’t have any clematis if it wasn’t for him.”

Joe Little, of Majesty magazine, said of the Queen’s use of a buggy: “It’s an extremely practical arrangement that will allow the Queen to take part in as many engagements as she is able to do.”