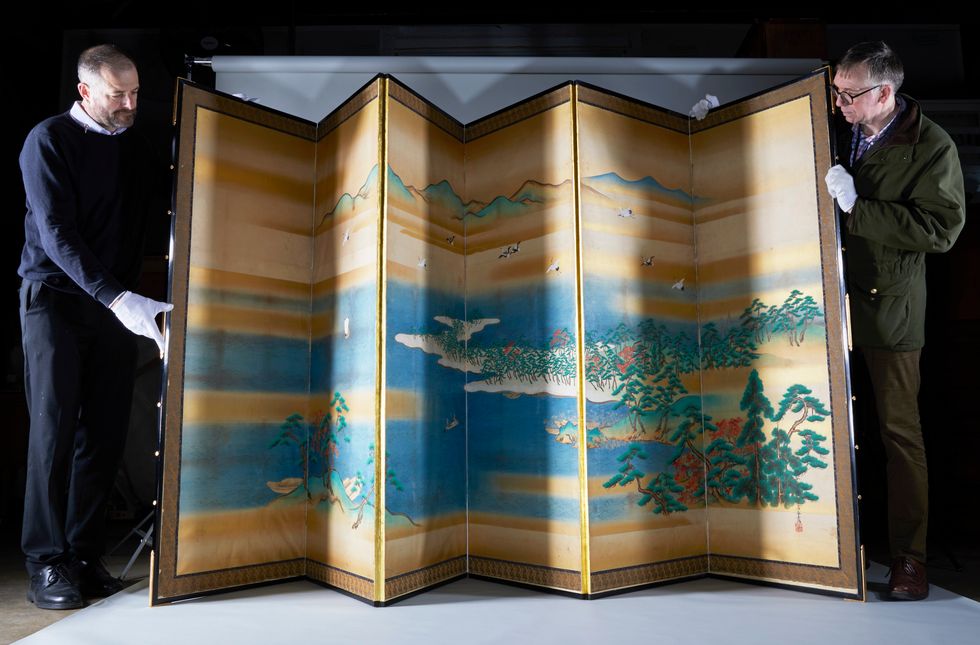 A pair of lost Japanese folding screen paintings sent to Queen Victoria in 1860 as part of a lavish diplomatic gift have been rediscovered in the Royal Collection.

The screens, which were thought not to have survived, will go on public display next month for the first time since they arrived more than a century and a half ago.

Extensive conservation work since they were found has revealed curious details of their history.

It was discovered that fragments of railway timetables were used to patch the pieces while they were on show at Windsor Castle during Victoria’s reign.

The timetables were used to paper over torn areas, most likely because replacement Japanese paper was not readily available, and the stations listed begin at Windsor, suggesting the repairs may have taken place at the castle.

Rachel Peat, curator of the Japan: Courts and Culture exhibition, said: “After decades of believing these important gifts were lost, this rediscovery is extraordinarily significant.

“The screen paintings marked a new era of diplomatic engagement between Japan and Britain and brought the vivid beauty of Japan’s changing seasons right to the heart of the British court.

“I’m delighted that visitors will see them on display for the first time, just as they might first have been admired by Queen Victoria.”

The screen paintings depict different seasons, showing Mount Fuji in the spring with cherry blossoms, and the Miho no Matsubara scenic area of the Miho Peninsula covered by pine trees and autumnal red maple trees.

The pieces formed part of the first diplomatic gift between Japan and Britain in almost 250 years.

Eight pairs of screen paintings were sent by the Japanese shogun Tokugawa Iemochi shortly after Japan’s reopening to the West, following more than two centuries of deliberate isolation.

The opulent gift to Victoria marked a landmark treaty that reopened seven Japanese ports and cities to British trade and allowed a British diplomat to reside in Japan for the first time.

But the screens were wrongly catalogued as Japanese works by an unidentified artist when they arrived,  and their links to Shogun Iemochi and their historical significance were lost.

Royal Collection Trust curators raised the possibility they might still exist during research for the Japan: Courts and Culture exhibition, and Dr Rosina Buckland, curator of the Japanese Collections at the British Museum, translated the artist’s signature on the two screens.

The signatures and style were compared with those received by other European monarchs at the same time.

It was also found that the pieces – featuring two to three layers of paper rather than the usual six to nine – were hastily produced, probably due to a huge fire in Edo Castle in Tokyo which would have destroyed the original versions before they could be sent to Victoria.

The screens will form part of Japan: Courts and Culture, the first exhibition to bring together the Royal Collection’s holdings of Japanese works of art, opening at The Queen’s Gallery, Buckingham Palace on April 8.

Please log in or register to upvote this article
JapanRoyal