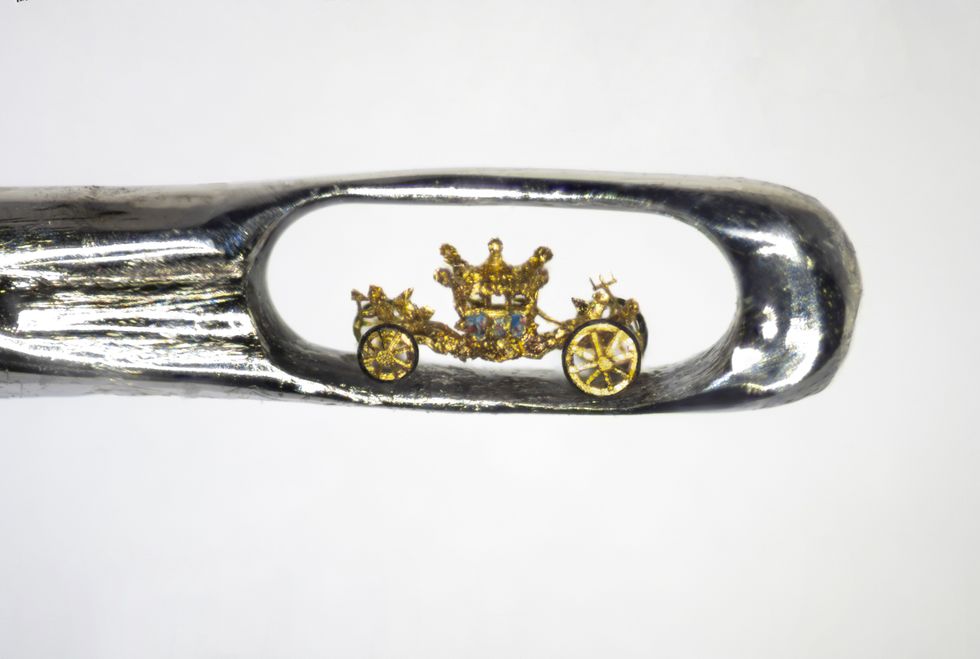 A renowned microsculptor has created the “tiniest biggest tribute” for the Platinum Jubilee – an astonishing model of the Queen’s Coronation Carriage which fits inside the eye of a needle.

Dr Willard Wigan fashioned and painstakingly put together more than 200 parts under a microscope to create the ornate work, which he hopes to take on a nationwide tour.

The 65-year-old, who was honoured with an MBE for services to art in 2007, said of his latest project: “This is the tiniest biggest tribute of all time for Her Majesty the Queen.”

The artist, who created a tiny 24-carat gold crown for the Queen’s 2012 Diamond Jubilee, said of the previous work: “It was the proudest moment of my life but I’ve evolved and moved on since.

“I’ve improved, I’ve got so much better. I almost work as though my life depends upon it.

“Having autism has given me a superpower to be able to do things other people can’t do.”

The West Midlands-based sculptor, who grew up in Wednesfield, Wolverhampton, was diagnosed with autism, which he describes as a blessing in disguise, at the age of 50.

Speaking before photos of his latest work were released, he told the PA news agency: “My mother would tell me that autism is a diamond in a dustbin because humanity has a habit of throwing things away.

“And then all of a sudden the lid comes off the dustbin and they realise what was in there.

“So I’m using this now as a message to humanity and a celebration to Her Majesty the Queen. This is the hardest thing I’ve ever done in my whole life.

“I think I need counselling now after doing this coach. But it’s taught me one thing – it’s taught me to train my attention span. I’ve learned that I have to make a statement with what I do.

“We under-estimate things we can’t see… we disregard the small world. Just because you can’t see something don’t mean it don’t exist.”

Having worked for up to 17 hours a day for several weeks on the coach, the artist likens his work to “trying to put a pin through a bubble without bursting the bubble”.

He has also been working on a tiny model of Queen Elizabeth as a young woman, which has included painting with an eyelash attached to the end of a needle.

His previous works include the world’s smallest handmade BMX bike and a tribute to Albert Einstein.

Admitting to being very tired after completing the incredibly detailed carriage, he said: “I finished about five or six days ago – I didn’t think I would finish it in time.

“I could sleep for England. But the glory is at the end.

“I must admit I hate doing this work. But I know what it does. I know the impact it has on people

“I’ve seen people walk out with their jaws in wheelbarrows when they see my work because it blows their heads off – it blows their minds. And that’s when I get my pleasure, off other people seeing it.”