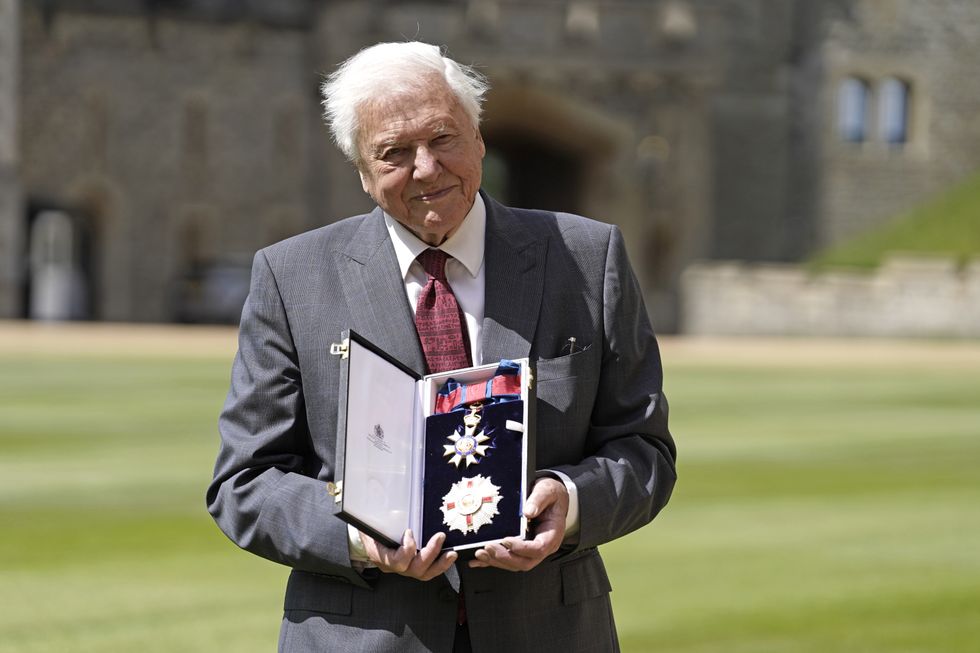 The 96-year-old broadcaster collected his Knight Grand Cross of the Order of St Michael and St George for services to television broadcasting and to conservation on Wednesday.

Sir David, first knighted by the Queen in 1985, collected the even more prestigious honour from her son, Charles, in an investiture ceremony at Windsor Castle.

The drizzly weather did not dampen the excitement around the castle, as journalists thronged the grounds outside, clamouring for a glimpse of the veteran wildlife film-maker.

Sir David even left athlete Laura Sugar, who won a paracanoe gold medal at the Tokyo 2020 Paralympics, feeling like a “fan girl”.

Ms Sugar, who received her MBE at the same ceremony, told the PA news agency: “It was pretty special to see him – he is an absolute icon – and a bit of a fan girl moment. I can say I was within a few feet of him for a good few minutes.

“I had no idea he was going to be here today so that was extra special.”

Sir David’s career spans seven decades and he is a member of the Earthshot Prize council, an initiative launched by the Duke of Cambridge to find solutions to environmental issues.

It comes after the veteran broadcaster featured in a segment of the Platinum Party at the Palace on Saturday.

William highlighted the efforts of “visionary environmentalists” during that section of the show, which saw a clip of Sir David projected on to Buckingham Palace.

The duke also spoke about the pride he felt for “my grandfather and my father” – the Duke of Edinburgh and Charles – who have championed the natural world.

Gary Lightbody, lead singer of rock band Snow Patrol, who made an OBE for services to music and to charity in Northern Ireland, told PA: “It went really well, Prince Charles, His Royal Highness, was very kind and asked me about my music and my writing.”

Actor Toby Jones, who collected his OBE for services to drama, said: “Theatre needs a lot of support to come out from the pandemic – it is one of the areas of culture that has been most hit and it is going to need a lot of imagination on the part of Government to realise the creative contribution, the health contribution, mental health contribution that theatre, along with all the other arts, provides.”

Spy chief Sir Jeremy Fleming, director of GCHQ, was also due to receive his knighthood after he was made Knight Commander of the Order of St Michael and St George for services to national security.

Calls for Steve Irwin to replace Queen on Australia's $5 note