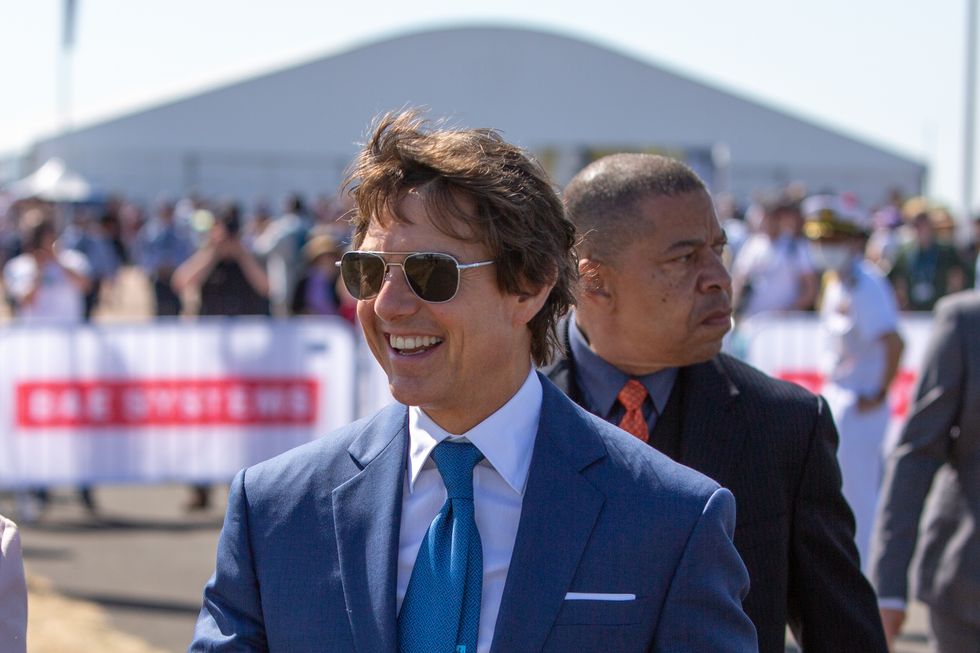 The air show confirmed Cruise’s arrival tweeting a picture, captioning it: “He can be our wingman any time! Look who just arrived at #RIAT22!”

He was captured sporting a beaming smile, a sharp suit and his trademark aviator sunglasses.

Paul Atherton, chief executive of the RAF Charitable Trust Enterprises, said: “Tom’s visit is something we’ve been trying really hard to keep under wraps but keeping secrets like that is hard when they’re so exciting.

“The Top Gun films and Tom’s famous passion for aircraft and flying have really helped to catapult aviation into the spotlight, which will help promote and inspire future generations of young people.

“RIAT is a home for those who appreciate the brilliance and excitement of the aviation world, so I am delighted to be able to welcome Tom to that home.”

Cruise, 60, was not the only celebrity enjoying the display as Countdown’s Carol Vorderman posted regular updates to her Instagram story.

Posting a video at the airfield, the 61-year-old said: “First in. It’s going to be a glorious glorious day. The runway is just literally there, boom.”

On the second day of the event, thousands of people descended onto the air base withstanding scorching temperatures.

Aircraft flying at the show included the US Air Force’s Bell Boeing CV-22B Osprey from the 7th Special Operations Squadron in honour of the special anniversary.

To mark the Queen’s Platinum Jubilee, the UK Royal Air Force will also fly the Avro Lancaster from the RAF Battle of Britain Memorial Flight and the BAE Systems Hawk T1 from the RAF Red Arrows.

Jets from 17 other Air Forces around the world including Spanish, Jordanian, Swedish and the Republic of Korea will also complete displays in the sky.

The military air show attracts 170,000 visitors over the weekend to see and hear several hundred aircraft of different shapes and sizes spanning the eras and from countries all over the world, its website said.

The Royal Air Force Charitable Trust benefits from the profits of all sales from the show, supporting initiatives including engineering and flying scholarships.

Cruise, who starred as Navy pilot Pete “Maverick” Mitchell in the 1986 film Top Gun and sequel Maverick this year, has been a licenced pilot since 1994.

Last week the actor was among the crowd on Centre Court who saw Serbian Novak Djokovic, 35, triumph against Australia’s surprise finalist 27-year-old Nick Kyrgios in the Wimbledon men’s singles final.

Please log in or register to upvote this article
Tom Cruise

Warning issued that Tether is 'crypto Chernobyl' waiting to happen