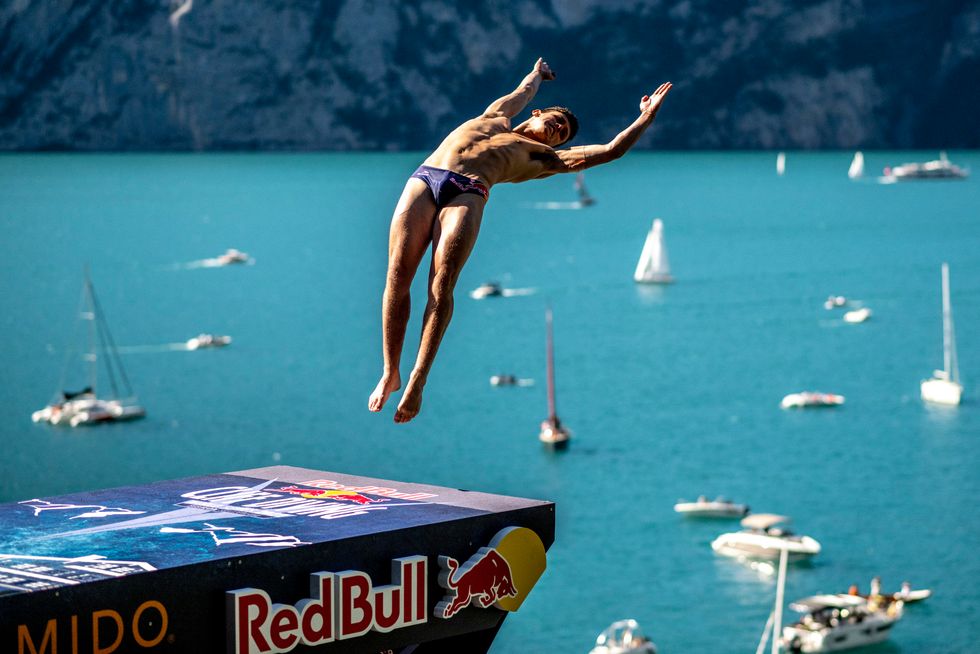 Aidan Heslop of the UK dives from the 27-metre platform during the final competition day of the sixth stop of the Red Bull Cliff Diving World Series in Sisikon, Switzerland (Romina Amato/Red Bull/PA)

A 20-year-old British diver who is among the favourites to win the world’s biggest cliff diving event has said his success at such a young age is a “dream come true”.

Aidan Heslop, from Plymouth, is representing Great Britain in the Red Bull Cliff Diving World Series that sees divers execute acrobatics as they jump from heights of more than 20 metres.

Mr Heslop won first place over the weekend at an event in Sisikon, Switzerland, and will compete again on Sunday in the penultimate event of the 2022 cliff diving season in Polignano a Mare, Italy.

Speaking to the PA news agency from Switzerland, Mr Heslop said: “It really is a dream come true because it’s what I’ve wanted to do since I was 11 years old.

“This weekend was my second win with Red Bull and the one before was incredible, I was over the moon on cloud nine for months afterwards.

“On Sunday, I just hit all four dives the way I know I can and to be able to stand on top of the podium is just such an awesome feeling.”

Cliff diving, also known as high diving, is a subcategory of the Olympic style of diving but the main difference is that the divers land on their feet when they hit the water.

“The impact is so hard from 27 metres that if you land on your hands, you’re not going to have a good time,” Mr Heslop said.

“The misconception that most people have with high diving is that you just go somewhere and do tombstoning, and it’s what we probably get quite a bad rap for.

“Safety is a big part of what we do and the type of training I do is very similar to the Olympic divers.”

Mr Heslop said it was an “honour” to sing the national anthem on top of the podium over the weekend, especially after hearing the news that the Queen had died.

“It’s a tragedy and a huge thing for the whole country,” he said.

“I never got to meet the Queen but it has been an honour to sing the national anthem on top of the podium.”

At the age of 16, Mr Heslop became the youngest diver ever to compete in the Red Bull World Series, making his debut at the 2018 season finale in Italy.

He also represented Wales that same year in the Commonwealth Games in Australia.

Four years on, Mr Heslop admitted he “always knew” he would be successful but never imagined he would get to this level at such a young age.

“I did kind of always know that I’d be in this position at some point but not at 20 years old,” he said.

The next two competitions in Italy and Australia are set to be tight, with just 30 points separating Mr Heslop from his rivals Catalin Preda, of Romania, and Gary Hunt, representing France.

“We only do four dives, so if you mess up one that’s 25% of your competition out the window,” Mr Heslop said.

Despite facing one of the biggest competitions of his career, Mr Heslop has another nerve-wracking event coming up this weekend – meeting his girlfriend’s parents.

“Her parents are coming to support me in Italy and it’s the first time I will be meeting her dad, so that’s going to be interesting,” he said.

“There’s a lot on the line for these last two competitions, but that will be a good distraction.”

Please log in or register to upvote this article
Plymouth