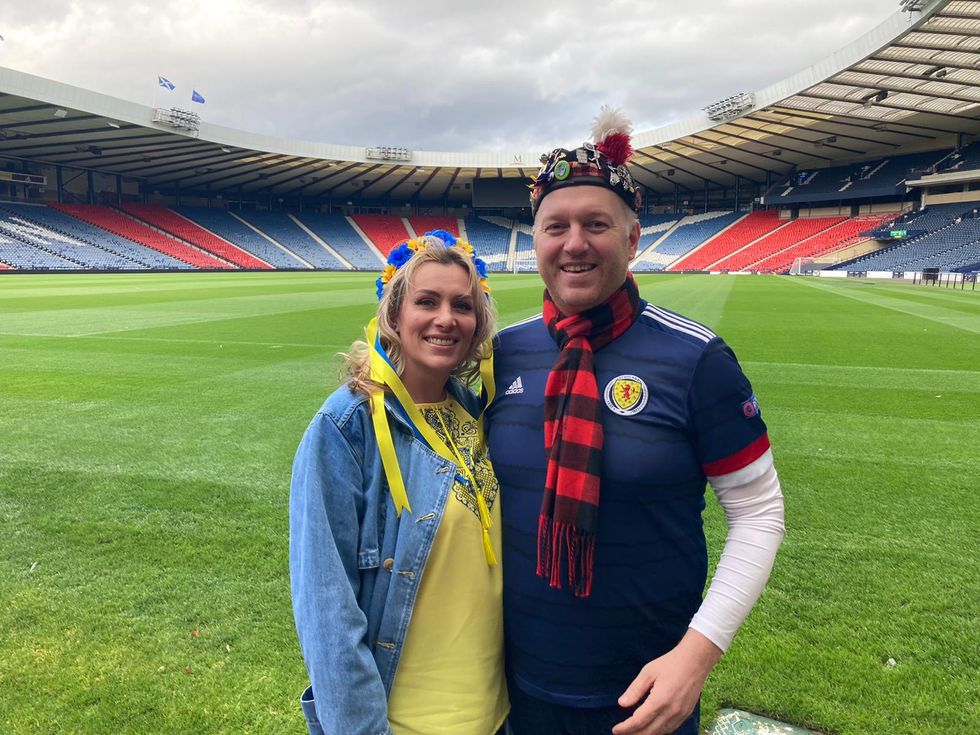 Scotland supporter Clark Gillies and his Ukrainian wife Victoria will be heading to Hampden together – before going their separate ways to cheer on their teams. (Clark Gillies/PA)

When national teams represent their country, it brings often divided football fans together.

But for Scotsman Clark Gillies and his Ukrainian wife Victoria they will be heading to Hampden Park together before going into different ends of the ground ahead of the match which will determine which country will play Wales in Cardiff for a spot in the World Cup finals.

“I think all Ukrainians will want any kind of victory, like Eurovision or anything, Ukraine winning is kind of a step closer for winning the war against Russia,” said 40-year-old Mrs Gillies.

The couple met each other when Scotland were playing away in Lithuania in 2003, and married three years later.

They have two children together, Nicole, nine, and Charlotte, five.

While their children are not too interested in football, and Mrs Gillies is set to cheer on Ukraine, Tartan Army Sunshine Appeal secretary Mr Gillies is hoping for a Scotland win.

He said: “The fact there’s a game, I think that’s the main thing because a few short weeks ago I think everyone would have said ‘no, the game’s not going to happen, Scotland are going to get a bye and play Wales in the final’.

Looking ahead to kick-off, Mr Gillies said it promised to be a good game.

“(Ukraine) want to show the world and show Russia that they’re not going to back down quietly,” he said.

But, Mr Gillies added, Scotland could do it.

“We had a good end to last year when we beat Denmark in Glasgow and did well on the road a couple of times and did really well at home.”

He added his thoughts on the result changed by the hour, but said: “I do think it will be a low-scoring victory for one team or the other. Maybe even go to extra time and penalties more likely.”

But his wife is much more confident on who will come out on top and advance to the next stage.

“I think it will be two zero to Ukraine,” she said.

Please log in or register to upvote this article
footballScotlandSportUkraine