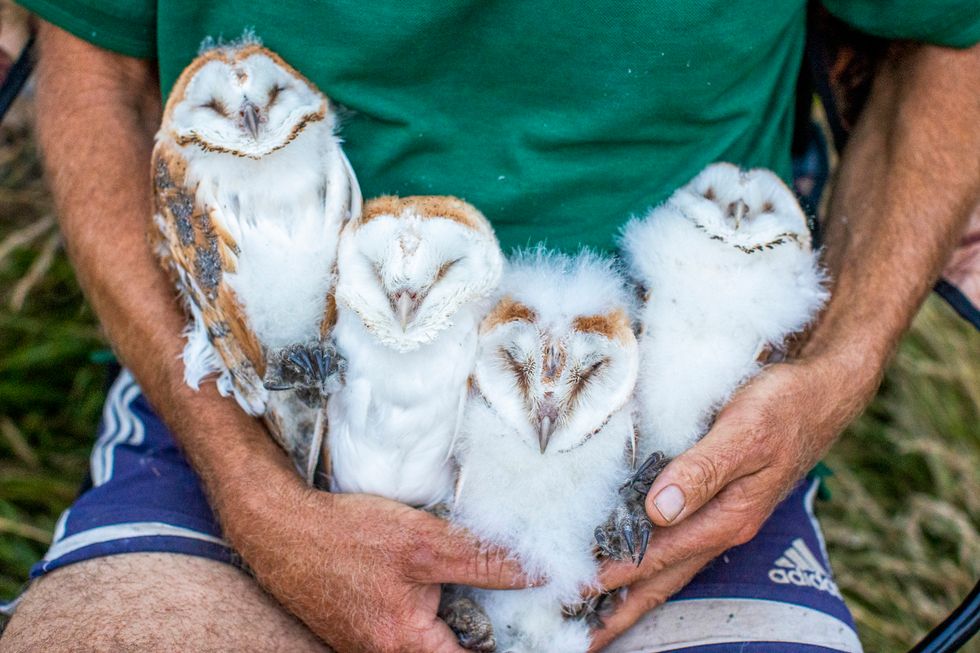 The discovery of a brood of four barn owl chicks in Co Antrim is being celebrated by conservationists.

The young birds were carefully ringed by volunteer nest minder Ciaran Walsh to help track where they go as they mature.

Mr Walsh said the father of the chicks was part of the largest brood of barn owls recorded in Northern Ireland back in July 2018.

“I had been tracking that bird from the nest site, he’s been living up here on his own, and a mate came last year, the first time a mate came, she is not ringed so we don’t know where she came from,” he said.

“It’s a great site, perfect for barn owls, he’s been here for four years and this is the first time he has had chicks.

Volunteer nest minder Ciaran Walsh holding the four owlets after they were ringed close to the shores of Lough Neagh in Crumlin, Co Antrim (Liam McBurney/PA)

“Barn owls in the wild normally only live for five years so I’m glad he got to put his own brood out before he meets his end.

“We had a total of six in this latest brood but two of them didn’t make it so there was four that we rung. They all look healthy and are a good weight, they should all go to fledgling within the next three to four weeks time.”

The 2018 brood, discovered on the outskirts of Crumlin, was then described by conservationists as unprecedented. They were also ringed.

One was tracked to Drogheda, Co Louth where it died after colliding with power cables.

“We think possibly another one from that brood is at our other site, but we would have to catch it to read the ring and we wouldn’t advise doing that,” he said.

“They’ll move about the country, looking for sites. Some will stay within two-three miles, some within ten miles but others will be more adventurous and go further. There was a bird a number of years ago was rung in August in Co Kerry and by the end of September it turned up dead at the edge of the carriageway in Limavady – it’s a fair jaunt in the space of four weeks from Kerry to Limavady.”

“We’re over the moon with that, and in total there are four chicks at this site, four in a chimney at an old farm house and three in an old water tower,” he said.

“We’re very happy, this year has been a good year.”

The Antrim man works along with three others, and said his work to support the barn owl population takes between 20-30 hours a week after work, with duties such as putting seed out to keep mice fed and putting up nest boxes.

“It is a big commitment but I enjoy it,” he said.

“We’ve got about 60-70 nest boxes up, and we’re hoping that when these chicks fledge they’ll find the other boxes and set up home. But there is no telling where they are going to go.”

The charity, the Ulster Wildlife Trust estimates there are fewer than 30 breeding pairs left in Northern Ireland.

The situation has been attributed to a loss of suitable foraging and nesting habitat, extreme weather conditions, combined with the build-up of toxins from consuming poisoned prey.

In Northern Ireland, barn owls are protected by the Wildlife (Northern Ireland) Order. It is an offence to intentionally or recklessly damage, destroy or disturb the bird, the nest, the egg or the dependant young at any time.

Please log in or register to upvote this article
Northern IrelandOwls