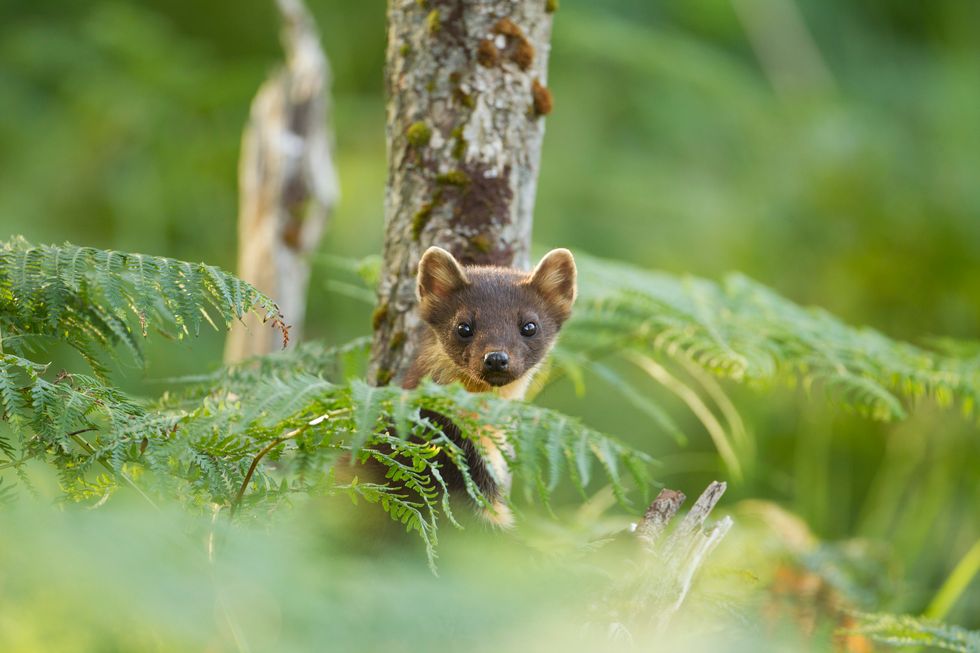 A pine marten among bracken in woodland (Mark Hamblin/PA)

Critically endangered pine martens could be reintroduced to the south-west of England following a 150-year absence.

A coalition of conservation organisations including the National Trust, the Devon Wildlife Trust and the Woodland Trust hope the nocturnal mammals could be released as early as autumn 2024.

They are working with both the Exmoor and Dartmoor national park authorities to identify two suitable sites for a release programme.

The Two Moors Pine Marten Project is now in discussions with residents, farmers, landowners and other land users to assess the impact of the plans on the environment and surrounding businesses.

As communities rightly seek to plant more woodlands to address carbon and climate, it is vital we also bring back the wildlife and wild processes that make those woodlands alive and functioning properly

Pine martens used to be among Britain’s most common mammals, but were pushed to the brink of extinction in England due to loss of habitat and persecution.

In Victorian times they were shot for sport, trapped for their fur and persecuted by gamekeepers, and they disappeared from the South West in the 1880s.

By the beginning of the 20th century, Britain’s remaining pine martens were limited to the north-west Scottish highlands, and small pockets of territory in the uplands of northern England and Wales.

But a study published last year found that the south-west of England was ripe for a reintroduction programme, despite not having the same large blocks of forest as Scotland and Wales.

It found that the region’s low density of major roads coupled with a network of woodlands and wooded valleys, often connected by river catchment areas, would provide enough habitat for pine martens to thrive.

“The next step will be to talk with local people and those with direct experience of pine martens to determine if reintroduction is right for Exmoor and, if so, how we can work together to design a successful reintroduction programme.”

Pine martens are omnivores, feeding on whatever is available at the time of year including voles, rabbits, fungi, berries and small birds – helping to keep the woodland ecosystem in balance.

Recent research has also found that they may boost efforts to save the native red squirrel by hunting their more abundant grey rivals.

Ed Parr Ferris, conservation manager with the Devon Wildlife Trust, said: “As communities rightly seek to plant more woodlands to address carbon and climate, it is vital we also bring back the wildlife and wild processes that make those woodlands alive and functioning properly.

“This can bring challenges and sometimes requires changes to how we live alongside nature, and so we want to work with all those affected over the next 18 months to understand how to do that sustainably – for pine martens, other wildlife and people.”

Last week, a report by the Environment Agency set out the near catastrophic pressures faced by UK wildlife in the face of habitat loss and global warming.

Britain is one of the most nature-depleted countries in the world, with 41% of native fauna and flora species decreasing in abundance since 1970, with 15% facing extinction.

Please log in or register to upvote this article
Climate crisisConservation