A Scottish student nurse who lost an incredible 7st 10lb in just 10 months says she has been left “feeling devastated” by her folds of saggy skin and “vanished” breasts.

Fiona Macdonald, 30, who lives in Kilmarnock, Ayrshire, with her husband, timber fabricator Andrew Macdonald, 30, and their children, Harris, six, and Marnie, four, took out a loan to pay for her £5,400 gastric bypass surgery in July 2021 after a lifetime of battling with her weight.

While she is delighted with her new slim look – going from a 17st 7lb dress size 20 to a svelte 10st 11lb size 10 – she has seen her bust shrink from a buxom 40D to a wilted 30A and has swathes of sagging skin on her stomach that she says rub and smell.

Fiona, who launched a GoFundMe campaign last week to raise £6,500 to have the excess skin removed, said: “Having surgery was one of the best things I’ve ever done. It completely changed my life. I can look at myself now and feel proud of who I am.

“But I can’t afford to get into more debt to pay to have my excess skin removed.

“Asking for help is embarrassing really. I have never asked anyone for anything before. But I feel I had no choice but to ask.” 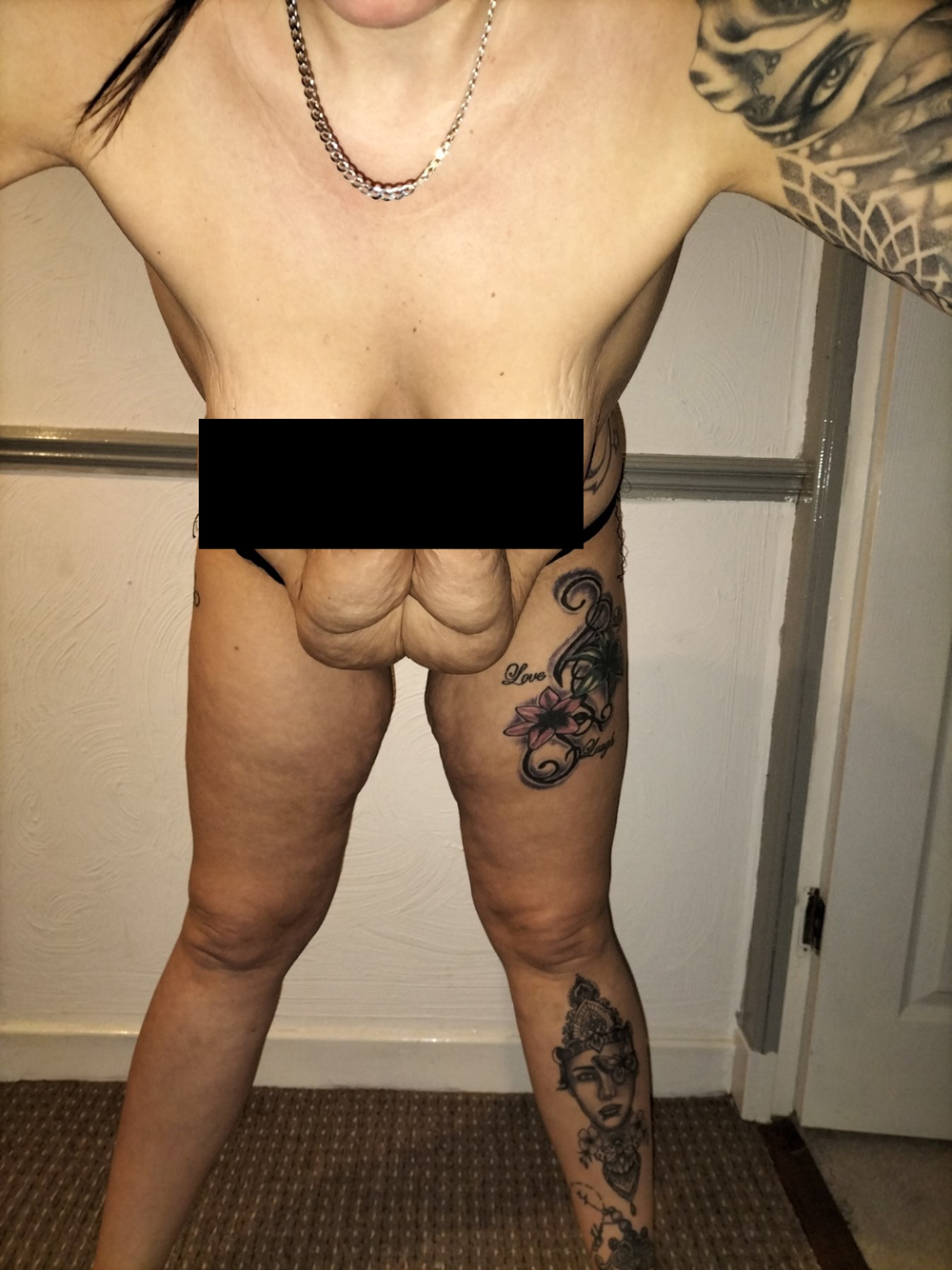 Fiona says she has struggled with her weight since childhood, recalling being taken to a dietician by her mum when she was just seven or eight years old.

In her mid-teens she joined a slimming club, lost over 2st and felt great about herself.

But this weight soon slipped back on, as her calorific eating habits returned.

Meeting Andrew at 19, she was a size 14, but says her relationship meant she felt “comfortable, would have takeaways whenever and gained lots of weight.”

Then the happy couple had their first child in 2015 and their second two years on.

Fiona recalled: “After having Marnie, my knees were hurting if I had to bend down to change the babies’ bums. My pelvis was sore.”

She added: “I was so uncomfortable and so heavy.”

Fuelled by embarrassment at her size, Fiona took to secret eating, saying: “I’d go to the shop, buy French fancies and eat them in the car on the way home. I’d then walk in with just a pint of milk like nothing had happened.

“I’d hide in the kitchen and eat crisps away from my husband. I was so embarrassed.” 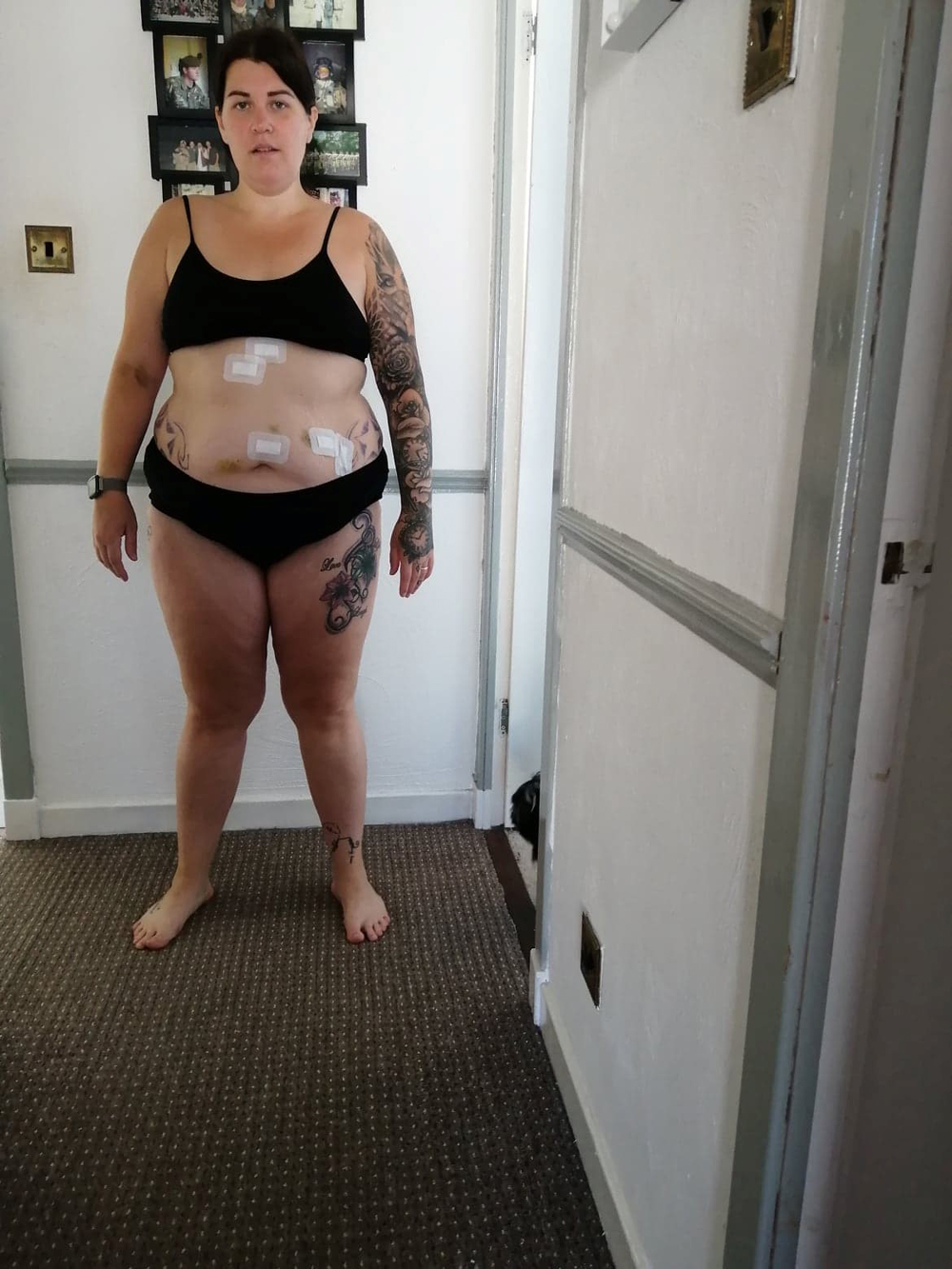 In late 2017, Fiona decided to try another slimming club. Becoming “obsessed” with the plan, she lost over 5st, going from a size 18 to a 12, began working out daily and planned her meals with precision.

Then the first lockdown hit and Fiona’s bad habits came roaring back.

She explained: “It was just us four home all day, every day. I felt so emotional and would just eat more.”

She added: “I’d stuff myself then feel sad all over again and eat even more.

“Sometimes I’d starve myself all day, thinking I was being good and sticking to the plan then night-time would come and I’d have a takeaway.”

Fiona’s diet consisted of cereal, toast and biscuits for breakfast, huge baked potatoes with a pudding at lunchtime, hearty dinners or a takeaway and plenty of snacks-like crisps, chocolate and ice-cream in between.

She was struggling to find the energy to take her children to the park, always ensuring their trips out revolved around going for chips or ice-cream.

And her confidence in facing new placements as a first year student nurse was low, as she was scared people were judging her as a health professional because of her size.

Fiona said: “In January 2021, I just broke down to my husband and said, ‘I can’t live like this anymore.’

“I’d wake up in the morning and obsessively think about what was for breakfast, lunch and dinner. I was in a terrible place in my own head.

“I felt like I was counting the calories in everything but eating more than ever. It was one of the saddest times of my life, realising how out of control I really was.”

Saying she accepted “the diets weren’t working for me,” Fiona began looking into bariatric surgery.

She contacted her GP, who told her she was not eligible for the procedure on the NHS – with the NHS website stating it is only available to those with a BMI of 40-plus, or those with a BMI between 35 and 40 who also have an obesity-related health condition that might improve with weight loss.

Looking into private surgery in the UK, Fiona was told it would cost over £10,500, making it unaffordable for her. 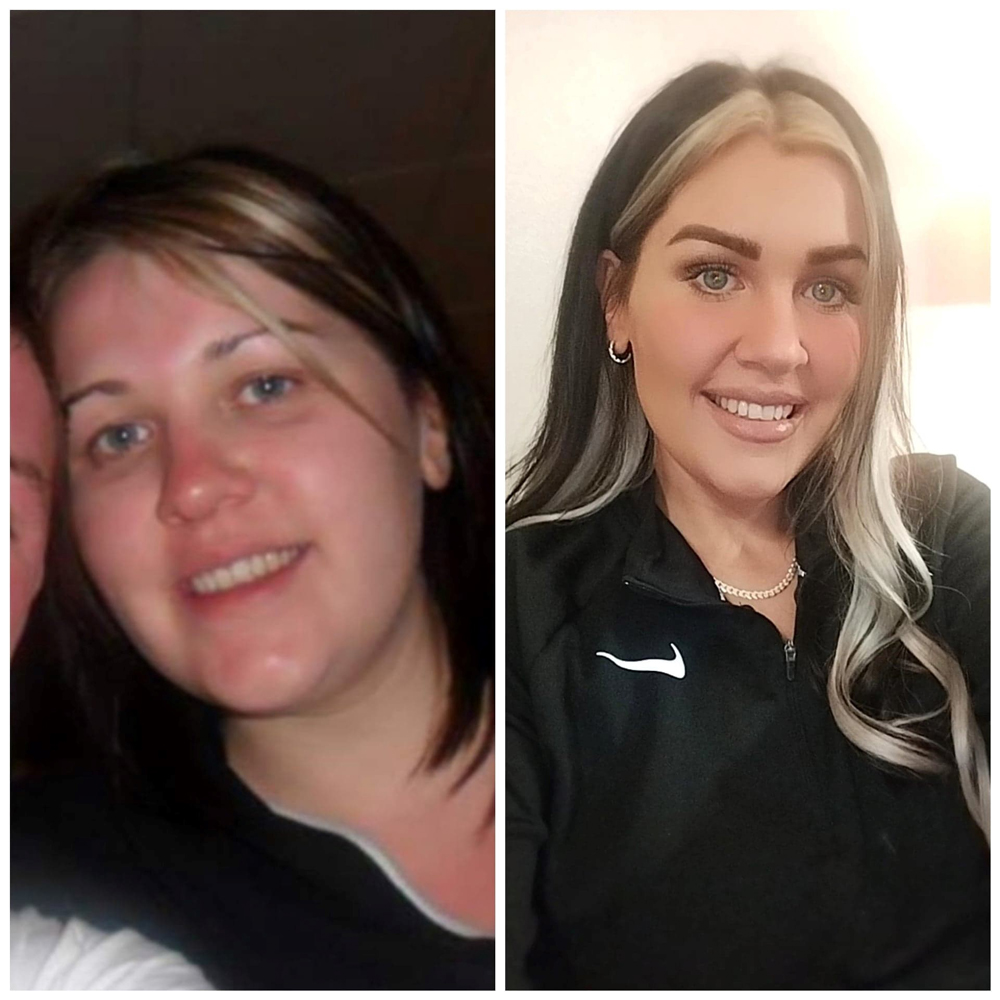 Instead, she decided to take out a loan of £5,400 to fund a gastric bypass at the Nordbariatric clinic in Kaunas, Lithuania, and had the procedure on July 8 2021.

During a six day stay in Lithuania, she had a 90 minute procedure under general anaesthetic to insert surgical staples into her stomach, forming a little pouch, connected to the small intestine, for food to go into – meaning patients struggle to overeat.

Fiona spent two days in the clinic recovering and being monitored by medical staff before convalescing for a further three days in a hotel, to ensure she felt well enough for her flight home.

She said: “Andrew was incredible. He is the most supportive, amazing person.

“He worked extra hours to make sure I had enough money to pay for food, drink and my hotel while I was in Lithuania.

“I had never been away from my children before I went. It was hard, but I knew I had to do it.”

She added: “I knew it would change my life and theirs for the better. I had spent so many years obsessed with my image.”

Fiona was not in pain after the op, but experienced a lot of wind and lived on a diet of water, yoghurt and baby food for two days after the procedure.

Returning home, she saw the excess weight fall away.

Her tastes also changed and she began eating a diet of tiny portions of yoghurt, sushi, lean meats and plenty of vegetables.

She said: “If I eat a lot of sugar quite fast, like at a kids’ birthday party, I get hot flushes and feel like I need to sit down. I feel quite light-headed.

“Mainly, though, I just don’t fancy the things I ate before.”

Fiona has now lost nearly 7st and feels it has improved all aspects of her life.

She said: “I am so much more confident. I am a better wife, a better mum, a better sister, a better student nurse. My confidence shines through in everything.

“Even though it was just a year ago, everything has changed. I feel like I finally know who I am. I love myself for who I am.”

She added: “I also finally think I am pretty and I never used to think that.”

Fiona now weighs 10st 11lb, wears a size 10 and has a healthy BMI of 23, but she has been left with lots of sagging, excess skin.

She explained: “It took me a long time to open my GoFundMe. I thought people would judge me.”

She added: “We are a normal family with a beautiful house and two cars. We don’t want people to think we are after handouts.

“But we are stretched in every direction. We’re still paying off the initial surgery and the mortgage, I am a student and Andrew works all the hours God sends.

“I can’t have this surgery any other way.”

Fiona launched her GoFundMe page late last month with a fundraising target of £6,500 for a full body uplift and a breast uplift at the same clinic in Lithuania.

Pointing out the issues with her skin are more than cosmetic, she said: “It would mean the world to get the skin surgery.

“My breasts now are non-existent and it feels really unfeminine. When I lean forward my stomach hangs down.”

She added: “I have to wear a corset when I run or it flaps about and hurts. If I even do housework without the corset then I can smell where the sweat is building up under my rubbing skin. It reeks.”

Fiona also has issues with her skin “weeping” where it rubs under her stomach.

She is hopeful that by asking for public support her dreams will be realised.

But, even with the skin she has been left with, Fiona said: “My family were so concerned about me going abroad for surgery. Now they’d tell you it was the best thing I ever did.

“I would advise anyone in the position I was in – sad and stuck – to not be afraid to change their lives. I have never been this happy.”

Utah woman discovers she 'married her cousin' while pregnant

Please log in or register to upvote this article
viralweight loss