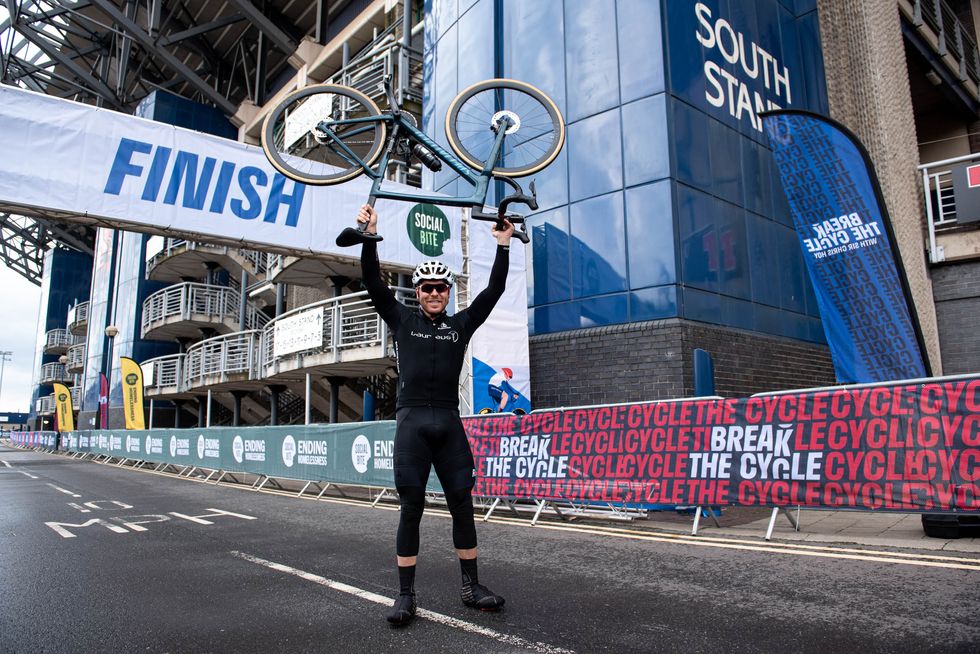 Sir Chris Hoy, Elaine C. Smith and Gregor Townsend were among the big names who joined hundreds of other cyclists on Sunday in a fundraising event aiming to end homelessness.

Social Bite’s Break the Cycle saw participants take on a 66-mile cycle from Scotstoun Stadium in Glasgow to Edinburgh’s BT Murrayfield stadium, as part of either Team Hoy or Team Tom Smith.

Team Tom Smith, led by Glasgow Warriors’ managing director and former Scotland rugby international Al Kellock, will donate 10% of its fundraising to a trust in aid of the family of former Scotland and British & Irish Lions prop Tom Smith, who died earlier this year.

Additional 20-mile and three-mile cycle routes ensured there were fundraising opportunities for all ages and ability levels, while virtual challenges allowed people from all over the country to take part.

Fitness guru Mr Motivator ensured the cyclists were warmed up at the starting lines, before joining them again in Edinburgh to warm down and enjoy a festival atmosphere, music and a comedy routine by Ms Smith.

Fundraising is open for the rest of the month, with the total raised so far including an anonymous donation of £500,000 towards plans by Social Bite to build a new village in the Greater Glasgow area.

Josh Littlejohn, chief executive and co-founder of Social Bite, said: “What a thrill it’s been to have Break the Cycle back bigger and better than ever before.

“We’re really thankful to our star supporters Sir Chris, Al, Shanaze (Reade), Elaine and Jennifer (Reoch), as well as the thousand passionate fundraisers who’ve made the whole event so special.

“We know times are tough at the moment for everyone, so we really do appreciate that so many people have got on board this year to fundraise.

“The money raised will help us provide vital support to people across the country who’ve experienced homelessness.

“This can be through a variety of means, from our plans to build two new villages, to empowering people into employment, or by providing people with free, fresh food when they need it most.

“It’s been fantastic to see so many people come together for what’s been an incredible event. The hard work continues now as we put the money raised to good use and help break the cycle of homelessness.

“We’re all very grateful to all of our supporters and partners who have helped push the campaign forward.”

Please log in or register to upvote this article
charityFundraisingHomelessnessSocial Bite