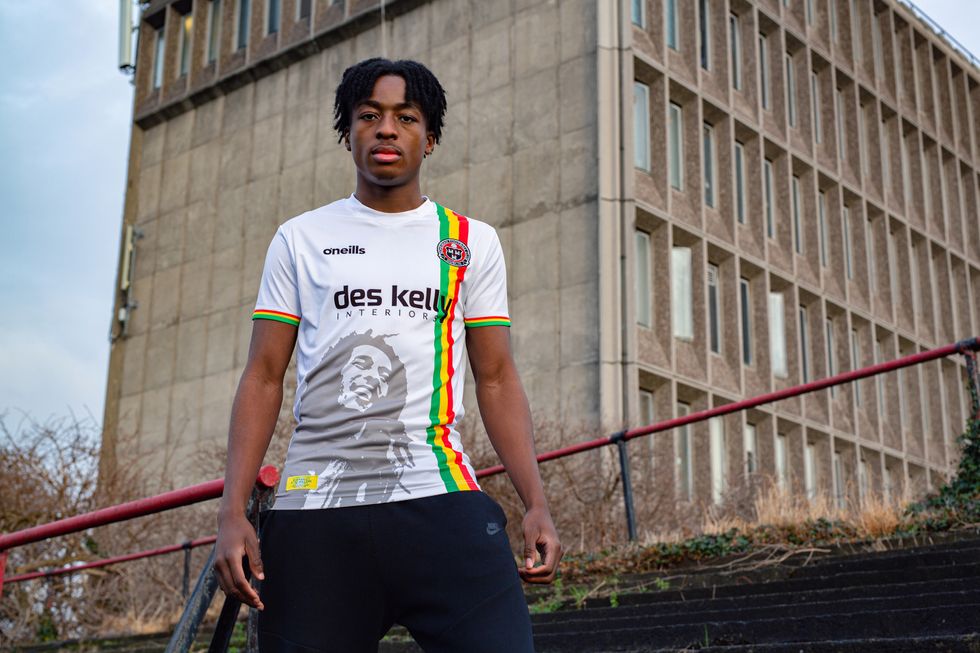 An Irish football club has collaborated with the family of Bob Marley to release a kit featuring the reggae musician, 42 years after he played at their stadium.

Bohemian FC’s away kit for the 2022 season pays tribute to Bob Marley’s final outdoor concert in 1980, which took place at the club’s Dalymount Park, and will raise money for asylum centres across Ireland.

The Bohs had previously tried to release a Marley-themed kit in 2018 but were thwarted by copyright issues.

On Monday the club announced they have been working with the Marley family and Universal Music’s merchandise division to release the kit for their League of Ireland Premier Division campaign, which begins in March.

Sales of the kit will raise money for refugees across Ireland, with 10% of profits being used to purchase musical instruments and football equipment at asylum centres – in conjunction with the club’s partners, Movement of Asylum Seekers in Ireland (Masi).

An Afternoon In The Park, the name of the Dalymount concert, is showcased in the design on the shirt and signifies Marley’s love of music and football.

Bob Marley played at the Bohemians’ ground in 1980 (Bohemian FC)

“The Marley concert at Dalymount is one of Ireland’s truly special musical events, his only ever Irish show and, sadly, his last ever outdoor one.

“His love of football is widely known to all, and that he played on our famous pitch before the concert, the same turf that some of the world’s best players have graced such as Pele, (George) Best and (Zinedine) Zidane is amazing.”

Lucky Khambule, a representative from Masi said: “We at the Movement of Asylum Seekers in Ireland are delighted to be part of this project with Bohemian FC.

“People in the asylum system face many difficulties, and being able to enjoy sport and music can truly brighten up days for adults and children alike.”

Music promoter Pat Egan, who booked the Marley concert in 1980, said: “I think this is a brilliant thing in terms of the memories of the day, the first major worldwide star to play an open-air gig in Ireland.

“It will be an iconic shirt and help keep the Marley legend alive and well on our island.

“The day itself, to see him on stage in the stadium, with the huge church steeple in the background was out of this world,” Mr Egan added.