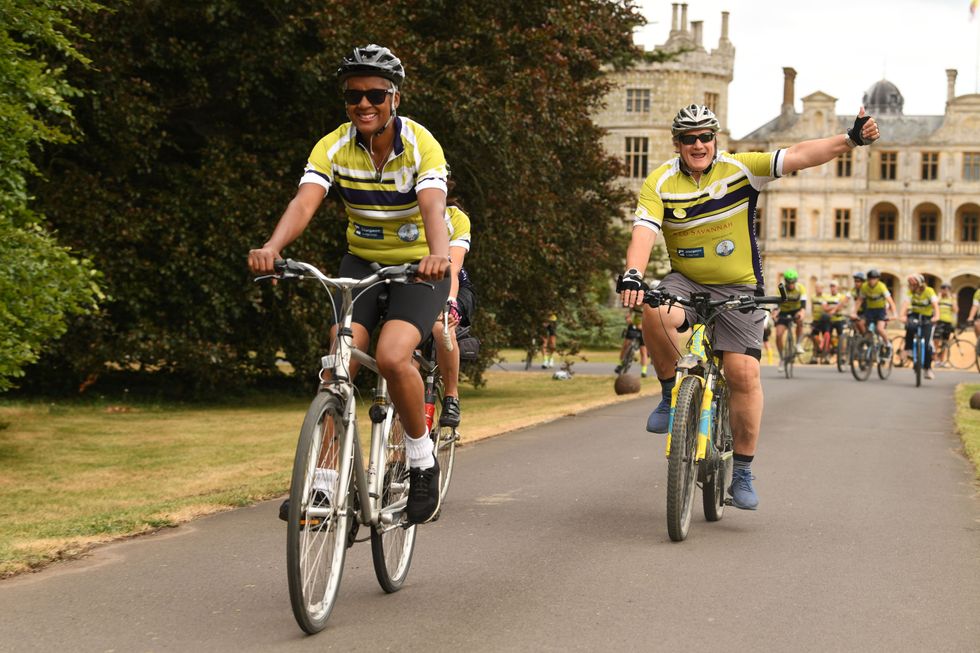 Five cyclists have completed a 1,100-mile trip across the UK, raising more than £80,000 for a charity working to install “life-changing” gardens at every spinal injury centre in the country.

Horatio’s Garden has so far enabled the installation of gardens at seven of the UK’s 11 spinal injury centres, offering patients the opportunity to recover from or adjust to their injuries through outdoor activities and classes.

The team were joined by presenter and garden designer Arit Anderson for the final leg of the journey from London to Salisbury, who hailed the “healing and restorative power that gardens can offer.”

Olivia Chapple, 57, founder of Horatio’s Garden, told the PA news agency: “It’s so powerful and moving that (people) have been so fired up about trying to bring gardens to all these centres.

“It’s all about re-finding hope, adjusting, distraction and finding a thread that’s going to help somebody on their long recovery.

“It will change lives for the future.”

Horatio’s Garden is named after Dr Chapple’s son, a 17-year-old aspiring doctor who was killed in a polar bear attack while on a school expedition on Svalbard, close to the North Pole.

Dr Chapple, a former GP, said Horatio was passionate about funding outdoor spaces at spinal injury centres and set in motion the first garden to be installed at the Spinal Treatment Centre at the Duke of Cornwall Hospital in Salisbury.

“He did some questionnaires and research and set up the structure, the idea, for the garden,” she explained.

“He found out that patients wanted somewhere beautiful, somewhere totally accessible and safe that didn’t remind them of their disability.”

They set off from Musgrove Park in Belfast on Sunday July 24 and averaged around 100 miles of cycling a day.

The 11-day challenge culminated in Salisbury on the 11th anniversary of Horatio’s death after stopping at spinal injury centres in locations such as Glasgow, Cardiff and Sheffield.

Dr Chapple said the team at Horatio’s Garden have been “overwhelmed” by the support.

“It’s phenomenally generous of people and literally every donation has motivated the cyclists to complete a really enduring challenge, they have had to really be determined and show resilience and teamwork through an awful lot of hills,” she said.

“The donations are so important to widen the network and awareness of what we are doing, but also the impact of spinal injury.

“None of us know when we may need the facilities in a spinal injury centre.”

Ms Anderson said she was “thrilled” to accompany the team for their last leg, which Dr Chapple and her husband David also joined in on.

“The team’s enthusiasm and energy were infectious, and it was a pleasure to be a small part of their journey,” Ms Anderson said.

“There is no doubting the incredible healing and restorative power that gardens can offer and raising funds to bring more gardens, to benefit more people, was a privilege.”

Dr Chapple said of Ms Anderson’s involvement: “She is just such a brilliant person and she’s been very engaged with the charity.

“She really understands the benefits of nature and health to wellbeing… She’s such a fabulous person.”

The “high-quality” gardens cost up to £1 million to install and include crafting areas, libraries, garden pods and automatic lights for those who cannot use their hands.

Dr Chapple added that the work has given family and friends the ability to “do something incredible” on Horatio’s behalf.

“I am really proud,” she said. “He left us with a gift of an idea rather than an idea, but thanks to incredible support we’ve been able to make it a reality.

“Every day is improving people’s lives and giving people some hope in times of really serious darkness.”

To find out more about Horatio’s Garden, go to: www.justgiving.com/horatios-garden

Please log in or register to upvote this article
healthSalisburyWiltshire