‘I know what you want’, says Queen after pet wanders into memorabilia viewing 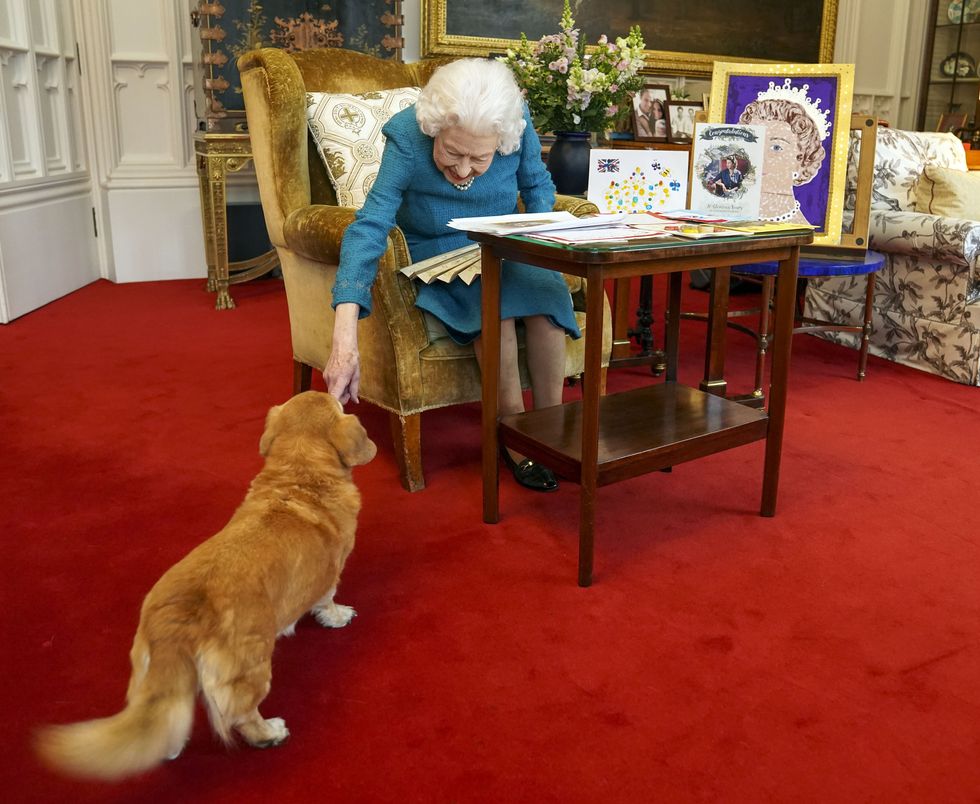 The Queen has viewed cards from jubilee well-wishers, but one inquisitive member of her household wanted a sneak preview – her pet dog.

Candy trotted into the oak room at Windsor Castle where a display of memorabilia from the golden and platinum jubilees was laid out ahead of the Queen reaching her milestone of 70 years on the throne.

Candy is a dorgi – a cross between a corgi and a dachshund – and she made a lap of the room, inspecting a small group of media representatives capturing the viewing.

The Queen said: “And where did you come from? I know what you want,” likely to be a reference to a treat, and called Candy over and gave her a stroke.

The monarch, who has owned more than 30 corgis during her reign, currently has three dogs – Candy now quite elderly, a young corgi called Muick, and another corgi puppy which replaced Fergus the dorgi puppy, who died unexpectedly in May last year.

Candy was present when the Queen held a face-to-face audience with the outgoing armed forces chief General Sir Nick Carter in November, walking forward to greet the senior figure.

One card celebrating the 2002 Golden Jubilee caught the Queen’s eye – it was made from eight bottle tops including milk, Coca-Cola and Schweppes bottles, and had the handwritten words “Ma’am You’re The Tops”.

“That’s good, simple but ingenious,” said the Queen to Dr Stella Panayotova, librarian and assistant keeper of the royal archives, who joined her for the viewing two weeks ago.

The Queen has since travelled to her Sandringham estate where she traditionally spends the anniversary of her accession to the throne – February 6 – a poignant day as it is the date her father King George VI died in 1952.

The display included a Golden Jubilee letter from a nine-year-old boy called Chris, titled “A Recipe For A Perfect Queen”.

Its list of ingredients – which included “500ml of royal blood”, a “dab of jewels and posh gowns” and “a dash of loyalty” – made the Queen laugh and she said: “That’s quite fun, isn’t it.”

Platinum Jubilee cards were also on display and the Queen praised the design of one featuring a picture of her as a young woman surrounded by flowers with the words “70 Glorious Years”.

Recipes and pictures of entries to the Platinum Pudding competition were on display, showing the results of cooks who have risen to the challenge of creating a memorable dessert fit for the Queen and the nation.

Another royal aide told the Queen: “We’ve had a number of Platinum Pudding competition entries that have been coming in in recent weeks. People have been very creative.”

The monarch browsed through the images of the entries and later said: “Looks like they’re all going to end with crowns on them.”

She also studied a fan presented to Queen Victoria to mark her Golden Jubilee in 1887 by the then Prince and Princess of Wales, later Edward VII and Queen Alexandra.

In the years after Victoria’s jubilee it was signed by members of her family including her eldest child, the Princess Royal, known as Vicky to her relatives, and granddaughter Princess Alix, later the Tsarina of Russia, and the then prime minister the Marquess of Salisbury.

The Queen opened the fan and remarked how easily it could have been damaged when being signed, adding: “Extraordinary isn’t it, and it still shuts.”

Commenting on the signatures she said: “Well that’s very interesting to see, quite a gathering.”

Queen shown with sunglasses, tattoos and as X-ray in Jubilee exhibition

Please log in or register to upvote this article
candyRoyal