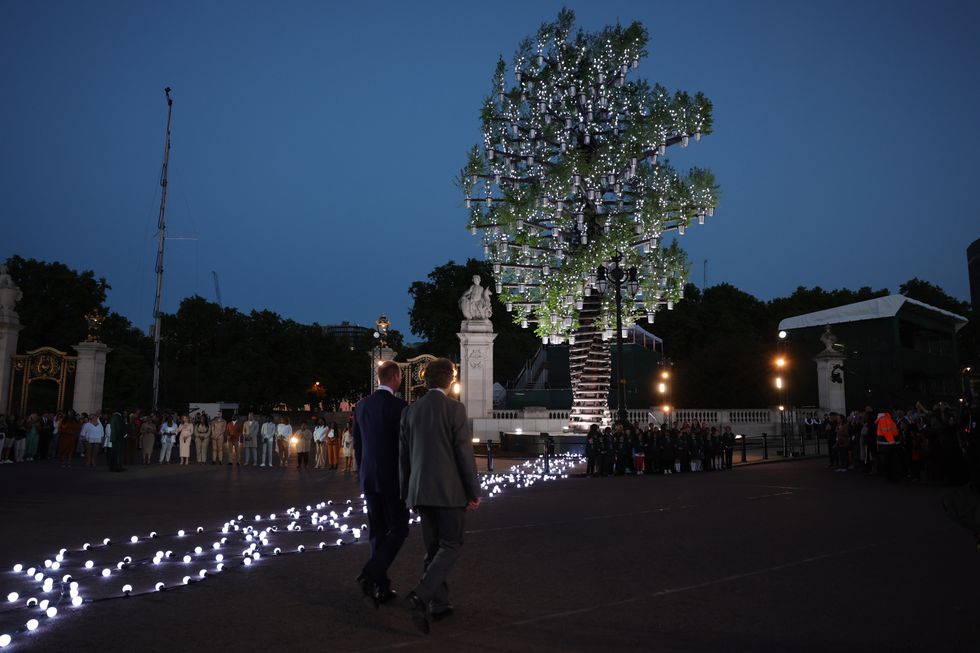 The Duke of Cambridge and Sir Nicholas Bacon attending the lighting of the Principal Beacon at the Tree of Trees sculpture outside Buckingham Palace, London, on day one of the Platinum Jubilee celebrations on June 2 2022 (Chris Jackson/PA)
PA Wire/PA Images - Chris Jackson

Hundreds of trees that made up a centrepiece of the Platinum Jubilee celebrations are to be planted across Britain in honour of the late Queen.

The 350 saplings made up the Tree of Trees, a 69ft sculpture installed outside Buckingham Palace in June to mark the monarch’s seven decades on the throne.

Having been cared for over the summer by a Cambridgeshire tree nursery, they will be sent across the country to be planted by an “inspiring” community organisation.

As part of the Queen’s Green Canopy (QGC), an initiative set up for the jubilee, every county in the UK will receive at least one tree.

“We are proud to unveil this nationwide network of organisations chosen to become custodians of these special trees in Her Majesty’s name,” QGC chairman Sir Nicholas Bacon said.

“In recognition of the positive impact that they have on their communities, the groups chosen represent the very best of Britain.

“The trees will serve as an inspiration for tree planting within communities and to encourage care for the trees which already exist as part of our nation’s stunning landscape.”

The scheme coincides with the planting season and will run from October to March, with the first tree being presented on Monday at the Royal Chelsea Hospital.

Twenty organisations from across the UK, including a Scottish food bank and Welsh anti-pollution group, will be given a sapling in a pot embossed with the Queen’s cypher.

The planting spree is said to be part of the QGC’s mission to create a “living legacy” for the Queen, who planted 1,500 trees around the world before her death in September.