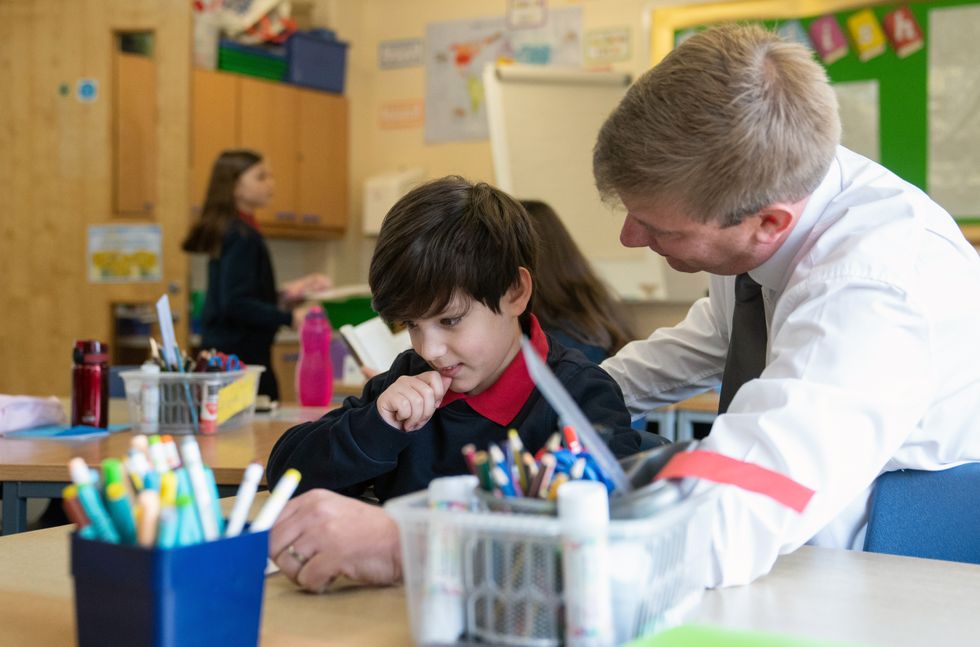 Ukrainian refugee Alikhan Yusupov, 10, with teacher Mr Gardiner during his first day at Caldecote Primary School after his family fled their home in Kharkiv, Ukraine and moved to the village of Caldecote in Cambridgeshire. (Joe Giddens/ PA)
PA Wire/PA Images - Joe Giddens

Two Ukrainian children who fled the war-torn city of Kharkiv with their family have started their first day at school in the UK.

Alikhan Yusupov, 10, and 11-year-old relative Miroslava Starkova arrived in the village of Caldecote, eight miles west of Cambridge, last month and are living at a home donated by a businessman.

Valeriia Starkova, 37, said she was “very emotional” to walk her son Alikhan and her half-sister Miroslava – Alikhan’s aunt – to their first day at Caldecote Primary School.

They were given worksheets in English, with Ukrainian translations, as they arrived at the school and hung up their coats and bags.

“It’s like the first day ever at school for them,” said Ms Starkova.

She said the children were shown around the school on Tuesday, when other pupils returned from the Easter break, so they “knew what to expect” before their first day on Wednesday.

She said they were “nervous” but she hopes they will soon pick up English, adding: “My hopes are that it will be easy for them.”

Ukrainian refugees Miroslava Starkova, 11, (centre) and Alikhan Yusupov, 10, (second from right) walk to Caldecote Primary School with their family for their first day of classes since they fled their home in Kharkiv (Joe Giddens/PA)PA Wire/PA Images - Joe Giddens

“They were really scared because they cannot speak English and they are not allowed to take phones,” Ms Starkova said.

“They were planning to use the Google translator but the policy is no mobile phones, so they were really scared about that.

“They made some notes with common phrases like ‘can you please call my mum?’ or something.

“They prepared themselves a little bit.”

Alikhan arrives with his sister Kamila, 12, who will start at a secondary school at a later date, for his first day at Caldecote Primary School (Joe Giddens/PA)PA Wire/PA Images - Joe Giddens

She said the primary school looked “very colourful, very comfortable”, and that in Ukraine they are “a little bit different” and look more like a secondary school.

“I like it here and I hope they will feel really easy,” she said.

She said the children had been “stressed about school uniforms because in Ukraine we don’t have a school uniform and they can wear whatever they like, like hoodies, jeans”.

“They cried about this, they didn’t want to wear uniforms, they wanted to have personality,” said Ms Starkova.

“They were stressed about the uniform but then I explained it has to be done, everyone is wearing that.”

Her daughter Kamila Yusupova, 12, is due to start at Comberton Village College secondary school near Cambridge in the coming days, and Ms Starkova said Kamila is looking forward to taking the school bus.

“It was her dream to go to school by school bus – this yellow school bus,” she said.

The family of 10, spanning four generations and ranging in age from 10 to 90, are living in a home that businessman Mick Swinhoe, 52, bought next to his own just before the war broke out and that he initially planned to use as a “project house”.

The executive at an industrial automation company changed his plans and, after posting on Facebook groups, he was connected with a family.

Ms Starkova said Mr Swinhoe helped them order a school uniform for Kamila online, and that they bought uniforms and backpacks for the younger two from a supermarket.

She said the community had donated much of what they needed – including stationery, notebooks and lunchboxes – adding she was “so grateful” for the help.

Ms Starkova’s brother, Roman Starkov, 38, is a British citizen, and the Cambridge-based software developer helped his family through the visa process to come to the UK under the Ukraine Family Scheme.

Please log in or register to upvote this article
refugeesUkraine