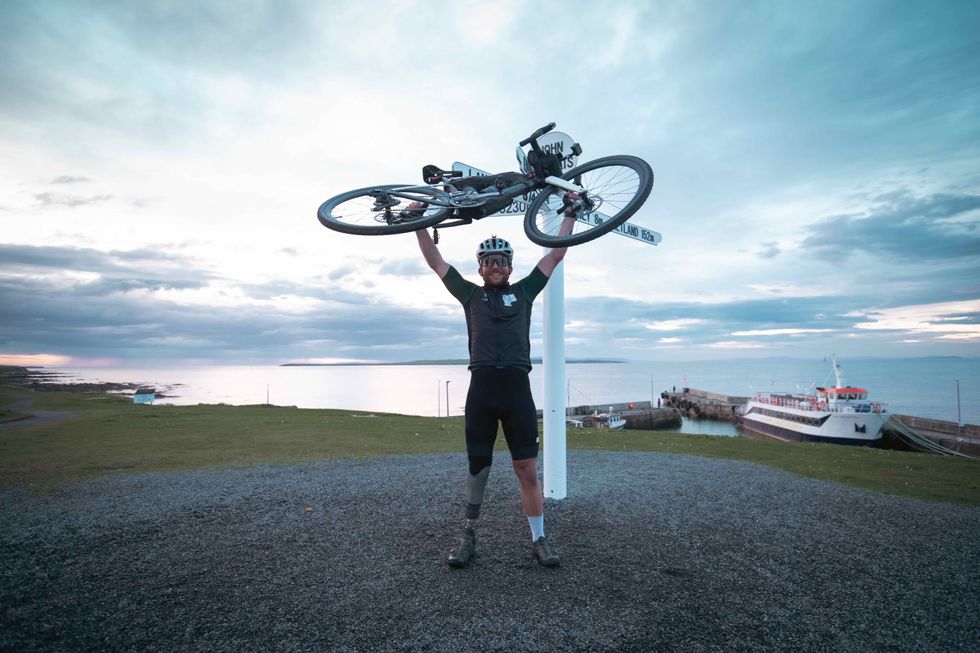 Amputee and Cornwall native Stuart Croxford has completed his gruelling 2000km charity cycle the length of the UK. (Stuart Croxford/PA)

A veteran amputee has completed a 2,000km cycle ride, covering the length of the UK, to raise money for charity.

Stuart Croxford, from Cornwall, had his right leg amputated in 2014 after he was injured in an explosion in Afghanistan.

The former Captain of the Duke of Lancaster’s Regiment began his challenge on May 9, starting at Land’s End, Cornwall, and spent 10 days cycling up to 20 hours a day to reach John o’ Groats in Scotland along a route known as the GB DIVIDE.

“The GB DIVIDE definitely isn’t for the faint of heart – from the relentless weather, steep inclines and washed-out trails, it takes a toll on your body and bike, ” Mr Croxford said.

“Now imagine doing that on four hours’ sleep a night.

“The cycle has been a huge test of physical and mental endurance. At times it has involved sleeping out under the stars. Despite severe exhaustion at times, I kept pushing through, knowing we are raising funds for a fantastic charity.”

The ride has so far raised just short of £5,000 for Blesma, a charity which provides support to former members of the armed forces who have lost limbs.

During his mammoth cycle, he rode through some of the country’s most picturesque and challenging landscapes, including Exmoor National Park, the Quantock Hills, the Brecon Beacons and the Yorkshire Dales.

He was joined for part of the journey by triple Paralympic medallist Jaco van Gass.

Mr Croxford initially sustained severe injuries to his feet in an explosion in 2012, then had his right leg amputated below the knee following an accident in 2014.

He went on to run the London Marathon, complete an Ironman Triathlon and take on numerous cycling challenges.

He became a trustee of Blesma since 2020.