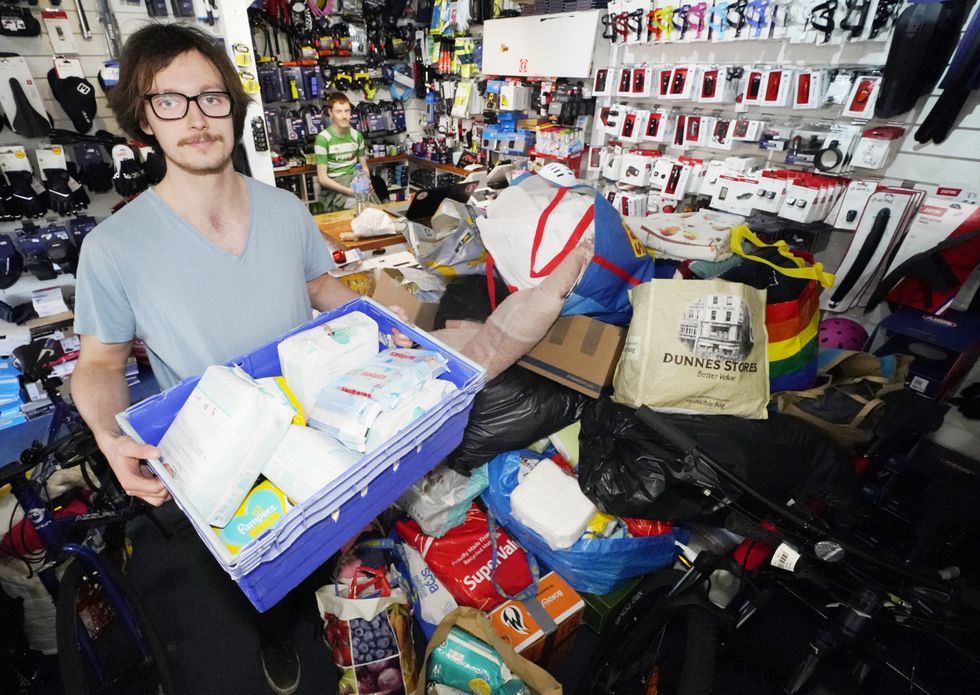 Volunteers collecting supplies for shipping to Ukraine have praised the generosity of the public in Ireland.

Dale Johnson is among those helping co-ordinate the collection effort in Dublin.

He said that they are struggling to keep up with the large amount of donations of food, medical supplies and bed linen in recent days.

Working out of Donnybrook Bikes in Dublin, Mr Johnson has been busy organising donations for Ukrainian refugees.

The shop is owned by a Ukrainian family who are working with Green Speed delivery service, who are transporting the goods to Poland and on to Kyiv.

One shipment of donations from the Irish public has already arrived in Ukrainian capital.

“We filled four or five cars on that first delivery,” Mr Johnson said.

“The shop filled up again and we had to look for somewhere to empty the goods and now we are were looking for more storage.

“We filled a few more cars. It’s been a great support from everyone. Loads of people are bringing food for babies, nappies, medical supplies, bed linens, and stuff like that.

“When you fill up the car it doesn’t make a difference because the donations are coming as fast as filling up the cars.

“There is a list online of what the Ukrainians need. They said they have enough clothing at the moment but they need the miscellaneous items which is stuff like batteries, power banks, and bed linens.

“They really need medical supplies because that stuff is hard to get your hands on.

“If you find that stuff in your house, they are in real need of that.”

The collection effort has been repeated right across Ireland in dozens of locations.

Please log in or register to upvote this article
KyivUkraine