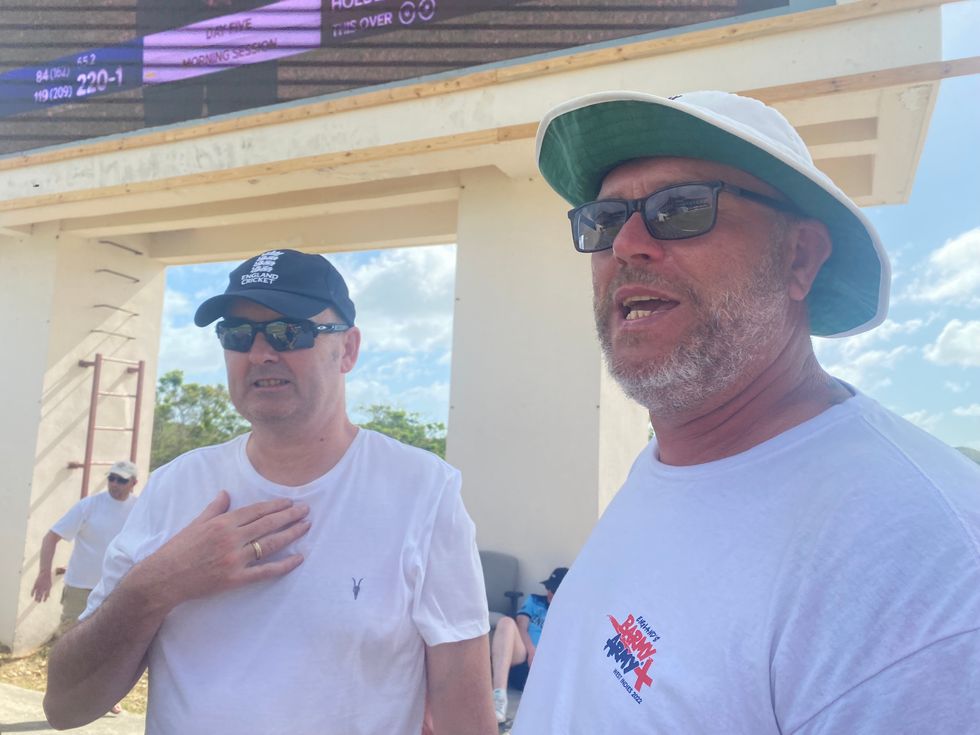 A blind English cricket fan has praised the camaraderie and compassion of his new “Barmy family” after finding his own personal commentator in the Caribbean.

Martin Lloyd and wife Tara made their way to Antigua to watch England’s first Test against the West Indies, a journey nine years in the making.

Martin had planned to watch England on their tour of New Zealand in 2013 but was diagnosed with a detached retina shortly before departing. A year later he suffered the same problem in his other eye and, four years ago, lost his sight completely.

But that did not stop him joining the Barmy Army travel group this week at the Sir Vivian Richards Stadium. That is where he met fellow supporter Rich ‘Tiny’ Nicholls, who decided to offer his assistance and spent a couple of hours each day describing the action ball-by-ball for his new friend.

The pair were side by side when Zak Crawley reached a century on day four, and ‘Tiny’ was back on commentary duty when England skipper Joe Root followed suit on the final morning.

“It’s been an emotional trip, I was meant to go to New Zealand nine years ago so it’s brought things full circle to finally get out on tour,” Lloyd told the PA news agency.

“This is the first time I’ve travelled to watch the cricket, I’ve waited and waited because I didn’t want to advance the problems with my retinas.

“It was superb to be here for Joe Root’s century, Rich talked me through it all, and I’m a Kent fan so to witness Zak’s century was a top moment.

“Rich didn’t have to do this for me, come and talk me through the game. I only met him on Tuesday on the first day of the cricket. The Barmy Army is a Barmy family really, everyone looks out for everyone and I just want to say thank you for the kindness and consideration.”

Nicholls, an HGV driver from Bristol, was more than happy to step up and try his hand having listened to his fair share of cricket games as a fan.

“I grew up listening to the cricket, Aggers and Blowers (Jonathan Agnew and Henry Blofeld) were my favourites, and I just tried to copy what I’ve heard,” he said.

“I really hope I see Martin again. He didn’t want to travel before but I hope it’s been a brilliant experience that he wants to do again. There’s a core of us who do it and we all look after each other, that’s what we’re all about.”

Please log in or register to upvote this article
Barmy Army