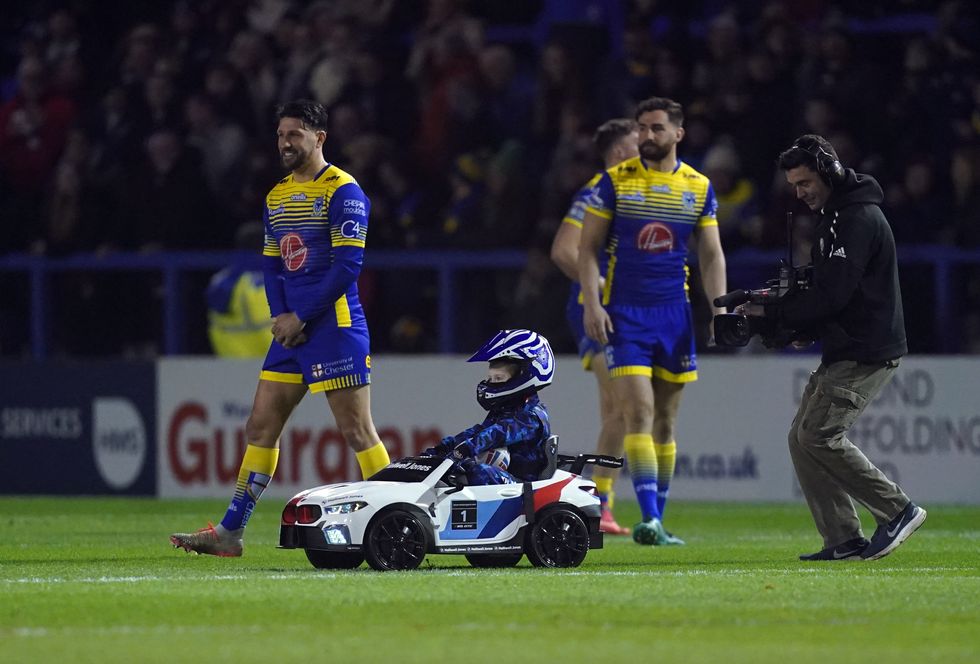 Warrington are keeping the identity of their new social media sensation ‘Whizzy Rascal’ a closely-guarded secret but promise there is more to come.

The match ball for the Wolves’ first home Super League game of the season was delivered by a young driver in a mini BMW, who sparked hilarious scenes after driving off with the ball.

Instead of taking the ball straight to referee James Child in the centre spot, the youngster drove to the far side of the pitch and, after being encouraged to turn around, decided it would then be more fun to carry on to the opposite touchline.

The match got under way when the ball was eventually wrestled from the car and Warrington emerged 34-10 winners over Castleford but Whizzy remained the talking point.

Warrington chief executive Karl Fitzpatrick told the PA news agency: “I can’t let you into too much but a lot of people have got the sex wrong.

“People are assuming it’s a boy and I’m not able to confirm or deny. But we’ll be doing it for the full season and there is a lot more to come.

“Against Catalans which is our next home game, we’ve also got an appearance from a mechanical dragon that will do battle with Whizzy Rascal.”

Warrington also kept under wraps the identity of a previous crowd entertainer, speed merchant ‘Wire the Flier’, with Whizzy’s anonymity similar to that of Top Gear’s ‘The Stig’.

But the club make no secret of their desire to innovate, having recently become the first Super League club to launch non-fungible tokens.

“We’ve shown over the years that we do things differently at Warrington,” said Fitzpatrick.

“We’re in the entertainment business and we try to give a positive, memorable and enjoyable experience. I think last night shows that we are doing our best to entertain.

“We want to expose the sport to a bigger audience and these kind of marketing activations creates talking points and grab attention.

“We live in a time when everyone is vying for people’s attention and I’ve no doubt when they start watching the game, they will absolutely love it, it’s the best sport on the planet.

“We were pretty confident it would go down well but not to this degree to be honest. The phone has been red hot, it’s been on BBC and it’s had over half a million views already on Twitter alone.”

Players from both Warrington and visitors Castleford all saw the funny side of the delay and it also brought a huge smile to new Wolves coach Daryl Powell.

“It was awesome wasn’t it?” said Powell. “It couldn’t have been any better to be honest.

“If he had taken it to the middle and then got back you’d have said ‘he’s fantastic, that kid’. But he’s created a bit of theatre which everybody enjoyed. It was awesome.”

Shaun Briscoe, the former England full-back who is Warrington’s commercial account manager, got a close-up view of the action after compering the pre-match build-up.

“We’d been planning it for a few weeks and a few people asked if we were sure about it,” Briscoe said.

“Initially we were going to make it a remote control vehicle but we decided to go with just the child. We’re in a sport that needs evolution and change. There will be a lot more to come on the back of this.”

The mini BMW belongs to local car manufacturer Halliwell Jones, who have the naming rights to Warrington’s stadium and are about to enter into a new five-year sponsorship deal.

The way Gary Neville signed off MNF had fans in stitches

Please log in or register to upvote this article
Super LeagueWarrington