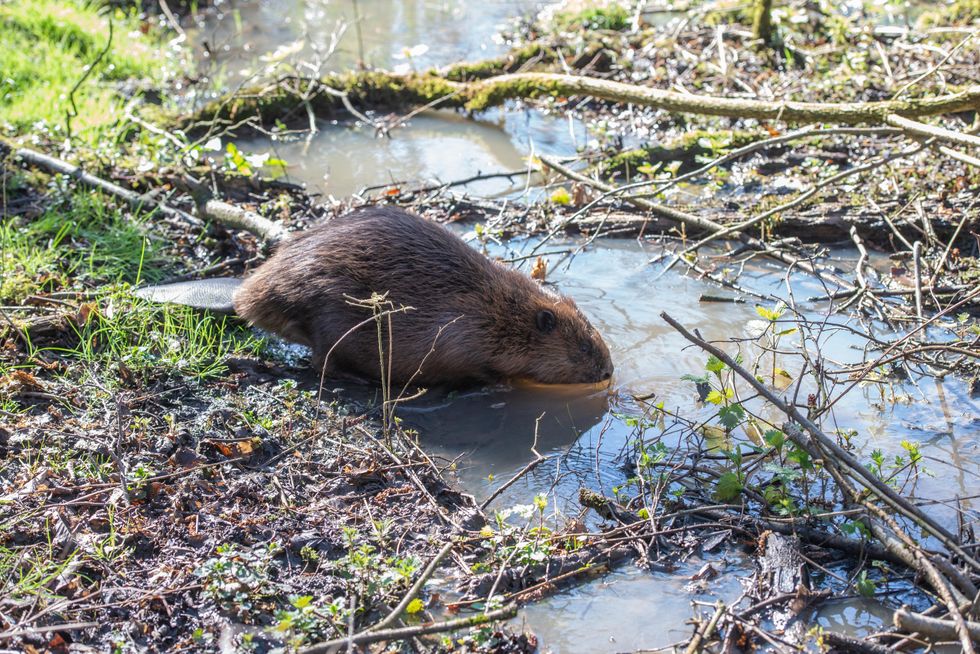 Beavers have been reintroduced to London for the first time in more than 400 years to help restore natural habitat and reduce the risk of flooding in the city.

Two beavers were released into a woodland enclosure in the grounds of Forty Hall Farm in Enfield, north London, on Thursday in a project by Enfield Council and Capel Manor College.

The male beaver, from a family in a flood reduction project in Yorkshire, was eager to get out of his straw-lined crate as it was carried through the six-hectare (15-acre) site and placed next to a pond created for the animals’ arrival.

When he was released, he headed straight into the pond, slapping his tail on the water at the audience of media and members of the project.

The female, a wild beaver from the Tay catchment in Scotland, had to be coaxed out of her crate when she was released a little later.

She eventually emerged into a shallow stream to head in the direction of the male, who it is hoped she will hit it off with – and produce young, known as kits, next year.

Beavers are “ecosystem engineers” who restore wetland habitats through dam-building and felling trees, slowing, storing and filtering water in the landscape, which attracts other wildlife and reduces flooding downstream.

Beavers have been re-introduced to London for the first time in more than 400 years! A beautiful pair have been su… https://t.co/8j8EWMEIPw
— Beaver Trust (@Beaver Trust) 1647518740

Enfield Council’s deputy leader Ian Barnes said the scheme was part of efforts to prepare the borough for the impacts of climate change, which is set to bring more heavy downpours to the capital.

The beavers will build dams, creating little areas of flooding and new ponds in the woodland enclosure, encouraging wildlife, and slowing the flow of water to reduce flooding in urban areas of the borough.

The two beavers have been nicknamed Justin Beaver and Sigourney Beaver for now but the council plans to give residents the chance to choose their names.

After a two-year project to get the beavers reintroduced into Enfield, the moment when Justin took to the water in a small pool created by the team was “quite emotional”, Mr Barnes said.

They do an incredible job, and that’s why we are so pleased that, after 400 years, they're back in Enfield

He said: “They’re not just beautiful creatures, they’re so good in the ecosystem, they encourage other animals and insects because of the ponds and dams they make. They do an incredible job and that’s why we are so pleased that, after 400 years, they’re back in Enfield.”

The council said it is also looking at reintroducing other species such as goshawks and would like to support kingfisher nesting and barbel fish breeding, while it has proposals to create a million-tree woodland in the next four years.

There are plans for a “beaver cam” to be set up, once the beavers have settled into their enclosure, to monitor them and give the public a chance to see the borough’s newest residents.

The species was once found throughout Britain, but was hunted to extinction in the 16th century for its fur, glands and meat.

They are now found living in the wild on a number of rivers in Scotland and England through official trials and illegal releases or escapes, and have also been introduced into enclosures in a number of English counties.

Conservationists are waiting for a Government decision on allowing applications to release the animals into the wild under certain criteria.

Dr Roisin Campbell-Palmer, beaver restoration lead at the Beaver Trust, was among those onsite to make sure the release of the animals went smoothly.

She said it was exciting to return the species to a habitat in quite an urban environment such as Enfield.

“It highlights that beavers as a species are so adaptable. This is not a species of wilderness, they can melt away into these landscapes,” she said.

In other parts of Europe they can be found in city areas, and all they need is enough space, water and food, and will undertake activities that humans are trying to do, such as create storage water ponds and remove sediment from the water, for free, she said.

Malcolm Goodwin, principal of Capel Manor College, London’s environmental college, said: “We know how vital nature and biodiversity is for the health of the countryside and the wellbeing of the good people of Enfield.

“Our students know this too and they will have the opportunity to protect, monitor and understand the beavers and how they interact with their habitat and the local ecosystems.

“This is especially important as they will graduate to become custodians of the natural environment we all share.”

Please log in or register to upvote this article
Enfield