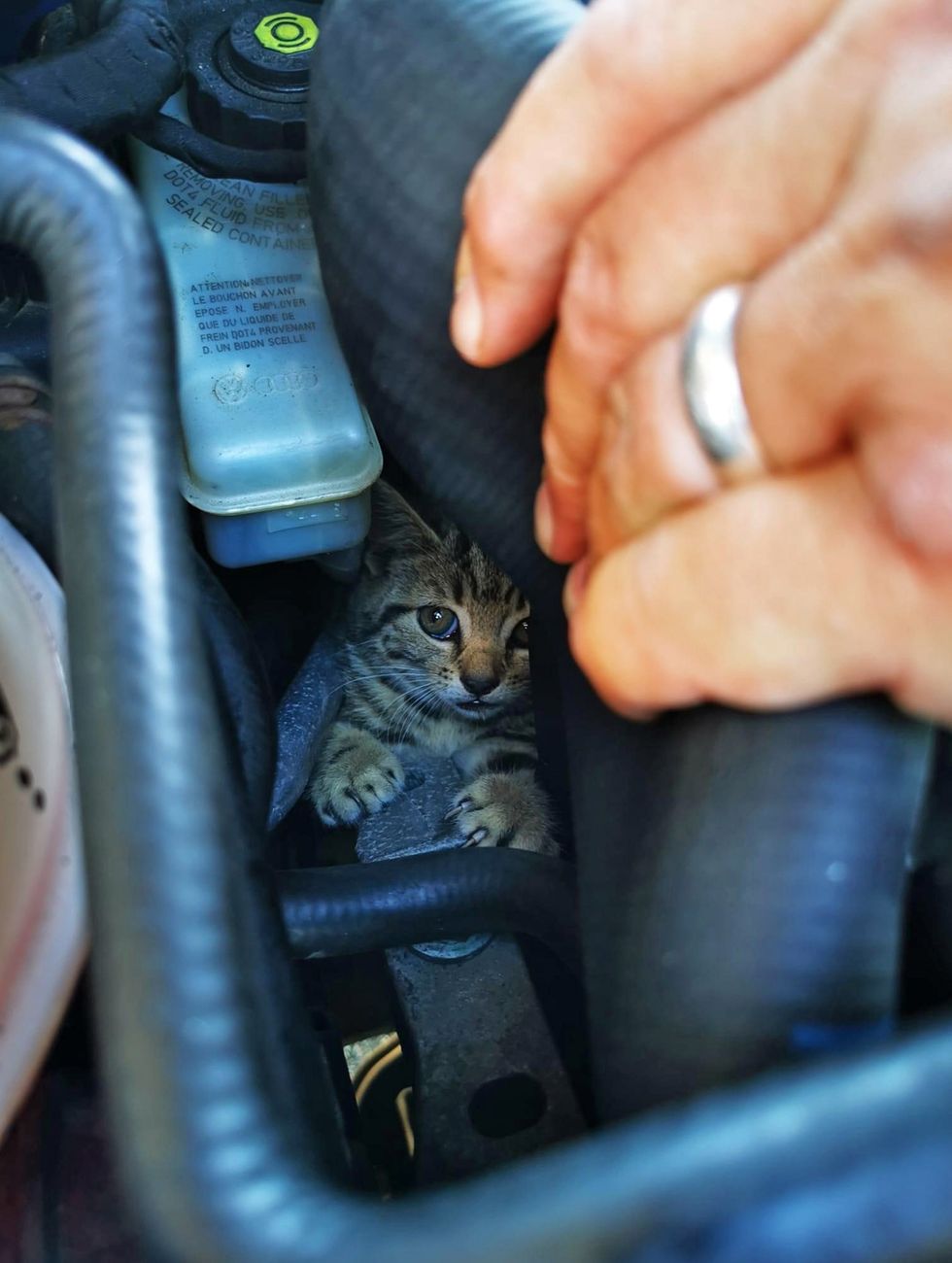 The eight-week-old kitten was discovered inside a tiny hole between the wheel arch and liner of a Volkswagen Golf. (Martyn Collick/PA)

A helicopter engineer who dismantled a car to rescue an injured eight-week-old kitten has said there was “no way” he could have left it behind.

Adam Hughes, a Leonardo Helicopters engineer, was on his way home from work at the Royal Naval Air Station Culdrose, in Cornwall, when he came across a kitten on the airfield.

Mr Hughes, who had lost his family pet cat the day before, noticed the tiny stray was limping with a broken leg.

“I was going home to comfort my family because we had lost our own cat Orlando to renal failure the day before,” he said.

“He had been a much-loved part of the family and really helped my daughter’s mental health during lockdown.

“There was no way I was going to leave a potentially injured kitten behind.”

However, as Mr Hughes and two junior aircrew approached the small grey-brown tabby, it jumped onto the exhaust pipe of a nearby Volkswagen Golf and ran into the car’s engine chamber.

The car’s owner, who was in a nearby hangar gave Mr Hughes permission to dismantle the car and a passing lorry driver offered his tools to help.

After removing the turbo charger and pipework, then jacking-up the car to remove the base panels, the kitten was discovered inside a tiny hole between the wheel arch and liner.

Mr Hughes said: “Luckily it was an older car so we could peel the liner back and when we did one of the aircrew was able to reach in to get hold of the kitten’s tail and unharmed back leg.

“Very gently, but with much squealing from the kitten, we were able to get her out.”

“I rang my wife Helen and daughter Lucy and asked them to get Orlando’s cat box ready because I was bringing home an injured kitten.”

The family called the Cats Protection’s Cornwall Adoption Centre for help, having adopted Orlando from the centre 11 years previously.

The kitten was then rushed to the vets for emergency surgery to amputate her leg and is now recovering well at the centre.

The adoption team have named the kitten Fergie, in a nod to the airbase where she was found and inspired by the Budgie The Little Helicopter books written by Sarah Ferguson, Duchess of York.

Samantha Lawton, from the Cats protection said it would have been “unlikely” that the kitten would have survived had Mr Hughes not stepped in to help.

“We’re so grateful to Adam and everyone who helped save Fergie,” Ms Lawton said.

“She will have been in a lot of pain with her leg and it’s unlikely she would have survived without Adam’s help.

“Little Fergie is now with an experienced fosterer and learning how to walk as a tripod, or three-legged, cat and how to play with fishing rod toys, ping-pong balls and toy mice.

“She has a long journey ahead of her, but has already shown she is a brave fighter and is beginning to really enjoy being among people and home-comforts.”

Fergie will be neutered, vaccinated and microchipped while in care then once she is fully healed and ready for homing her details will be posted on the centre’s website.

To contribute to the cost of Fergie’s vet care, surgery and after-care, visit: www.justgiving.com/fundraising/cats-protection-cornwall-acfergiesappeal