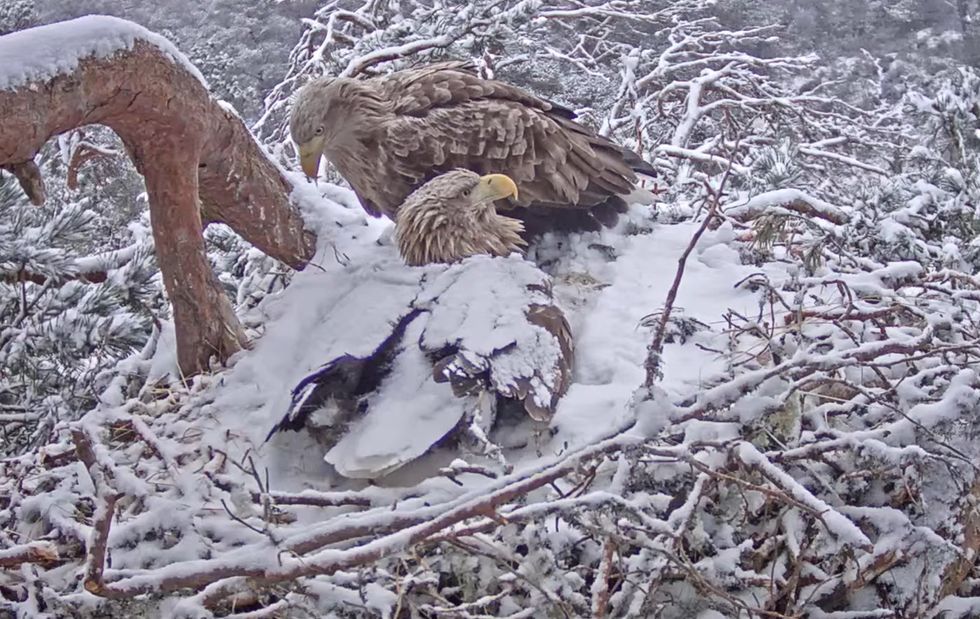 The female can be seen brooding two eggs

A hidden camera has been installed near an eagle’s nest to give a live view of Scotland’s largest bird of prey in what is said to be a UK first.

White-tailed eagles Shona and Finn, also known as sea eagles, are incubating two eggs at the nest in the Cairngorms.

A camera has been installed in a stick about three metres from the nest and the birds’ activities are being beamed live to the Loch Garten Nature Centre at RSPB Scotland’s nature reserve at Abernethy.

As eagles will often become nervous about new items or changes around their nest, all work was undertaken in autumn when it was safe to do so and the camera has been hidden in a stick to avoid unsettling them.

Jess Tomes, Abernethy site manager for people at RSPB Scotland, said: “This is an enormously exciting addition to the visitor offer at the Loch Garten Nature Centre.

“The images we’re getting live from the nest are phenomenal and our visitors will get a very rare and extremely privileged peek at the domestic life of a breeding, white-tailed eagle pair.

“Already we’re noticing little personality traits in them – the male is very attentive to his mate and to tidying the nest – it’s fascinating to watch.

“We’re delighted and very relieved that they haven’t been fazed by the camera at all and are now incubating two eggs, which we estimate could hatch around the second week in April.”

Experts from Wildlife Windows installed the camera under special licence from NatureScot, using methods successfully trialled in other countries including Estonia and Latvia.

This has been one of the most challenging camera installations we have completed, due to the sensitivity of the species and remote location
Jason Fathers, Wildlife Windows

The exact location of the nest is not being revealed to the public to avoid the risk of the birds being disturbed.

“As far as we are aware, this is the first camera of this quality on a white-tailed eagle nest in the UK.

“This has been one of the most challenging camera installations we have completed, due to the sensitivity of the species and remote location.

“We are very keen to see the story unfold while getting a close-up insight into white-tailed eagle life.”

White-tailed eagles have a wingspan of 2.5 metres (8ft) and are often referred to as “flying barn doors”.

They were driven to extinction in Scotland in 1918 before birds from Scandinavia were re-introduced to the Isle of Rum in 1975.

Subsequent re-introductions in other parts of the country, as well as the birds’ natural dispersal means there are now populations spread as far as Fife, Orkney and the northwest Highlands.

The nest is situated in the landscape of the Cairngorms Connect partnership, which includes neighbouring land managers, and which RSPB Scotland is part of.

The camera and live feed to RSPB Scotland’s Loch Garten Nature Centre have been funded by the European Regional Development Fund through NatureScot.

Please log in or register to upvote this article
BirdsCairngormsRSPB Scotland