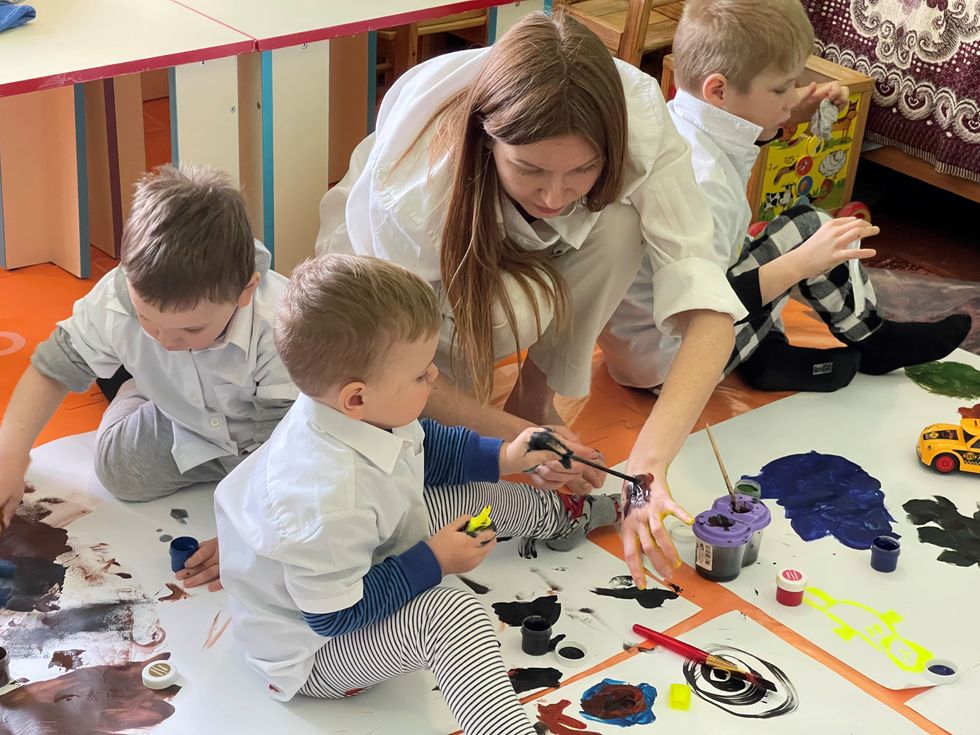 A volunteer leading art classes at an orphanage set up to help young Ukrainian refugees has said the sessions with the children are “healing them from the inside”.

Lily Smirnova, a 33-year-old from the Lviv region, has worked in marketing for more than 10 years but recently began visiting an orphanage in western Ukraine several times a week.

Ms Smirnova estimates 120 children aged two to six are staying at the orphanage, the exact location of which she would not reveal for security reasons, and there are preparations to welcome more.

The group is made up of refugees from orphanages across Ukraine, with many having fled from Eastern Ukrainian areas such as Mariupol as Russian attacks worsened.

Ms Smirnova brings with her paint, brushes and other art supplies which she has noticed have “inspired” the children.

“This creativity and freedom, the mix of the two, I believe is helpful for these specific kids especially that (have) suffered a lot,” Ms Smirnova told the PA news agency.

“They fled from their territories in their usual location … they experienced bombing nearby and being in a shelter.

“Mostly the goal of this project is to get them out of that negative feeling.

“I really believe that this freedom and creativity is something that is really healing them from the inside … you are forgetting about everything that is happening in the real world.”

Ms Smirnova said she could see a difference in the children’s demeanour before and after the sessions.

“We had a kid who had the choice to pick a colour and he picked black – his paintings were black, he painted his face with black. He’s from Mariupol,” she explained.

“But at the end of the day, he looked at himself in the mirror and (said), ‘No, no, no, this is not the colour I want. I want something bright, maybe like the sun.’

“At the beginning of the sessions, kids are very closed… There are not many smiles, they are very serious kids.

“(But they) open themselves, they are engaged in something and they are really open to this.”

At the beginning of the sessions, kids are very closed (but they) open themselves.

The children are free to draw and paint whatever they like during the sessions with Ms Smirnova – including her, which they do often.

“I love every part of it, from the beginning to the end of the session,” she said.

“At the end of the session, I’m a little bit sad that it finishes – I really like how the kids are drawing something and then they are proud, they show me their picture and say “this is my picture, this is what I drew. I want to do more”.

“Being with kids, sharing my feelings with them and giving them the love – I really like to hug them and appreciate the small moments.

Ms Smirnova added that while the painting sessions are “chaotic” it is also an opportunity for other teachers to rest.

“They have a rest and then they can come back to kids more energised,” she said.

“But definitely what we do see at the beginning and the end of the session is that they are different kids, they are so bright and laughing after the sessions.”

While not using any “specific methodologies,” she said it is important that their creativity is honoured and applauded.

“They can paint their faces, they like it very much, they like to paint me too,” she said.

“And when they do something, they really honour it and they are proud that they created something.

“We have this minute of proud to advocate and give some applause that they created something: this is their painting and their art.”

Ms Smirnova is documenting her experience of the war through her Twitter account, @Lilya_Smirnova, and hopes to continue her work at the orphanage.

Please log in or register to upvote this article
LvivRussiaUkraine