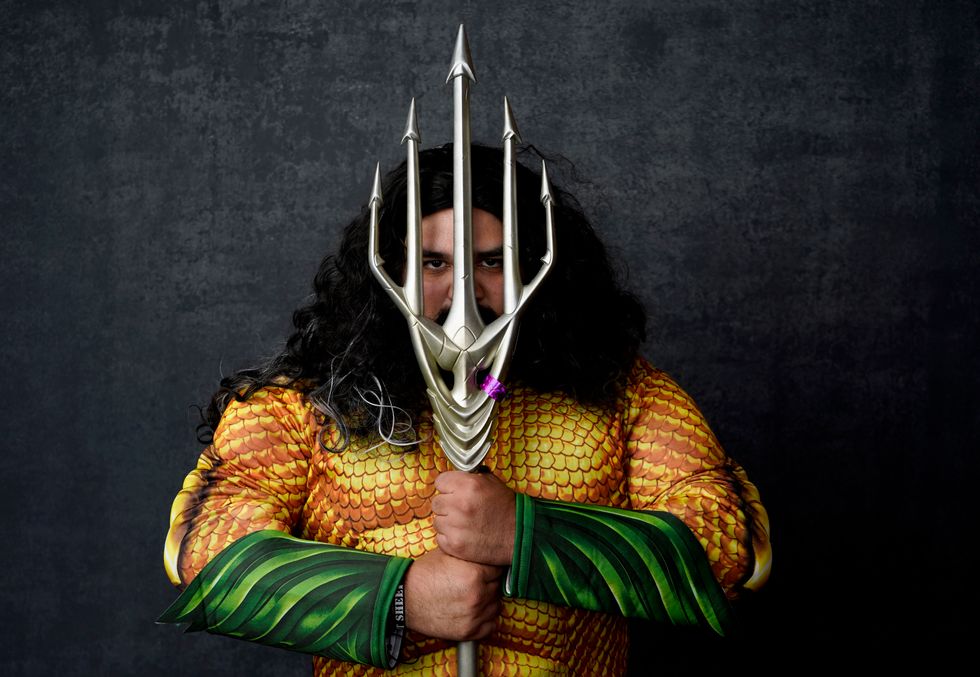 Pop culture fans say the San Diego Comic Con has been ‘missed dearly’ as the convention returned in person for the first time in two years, after being forced online due to the coronavirus pandemic (Chris Pizzello/AP)
AP/Press Association Images - Chris Pizzello

Pop culture fans say the San Diego Comic-Con has been “missed dearly” as the convention returned in person for the first time in two years, after being forced online due to the coronavirus pandemic.

Thousands queued for hours in the sun for the event which saw strict protocols enforced, including Covid wristbands, vaccine checks and mandatory face masks.

Bryn Tarr, a costume-maker from San Diego, dressed as the Armourer from Disney’s Mandalorian series and was joined by a model Baby Yoda in a carrier unit – made from a converted Euro-stroller buggy.

“Costumes take us approximately four to six months but we wouldn’t have it any other way,” she told the PA news agency.

“We love being in full regalia for conventions.”

Ms Tarr added: “It’s awesome to be back, we missed it dearly and we’re so glad to see our fellow cosplayers and fans of the Star Wars and Mandalorian series out to greet us and want to pose with us.”

Brian Cicco, 55, who dressed as super-villain Mysterio from the Spider-Man franchise, said the return of the in-person event was “definitely what the fans needed”.

Mr Cicco is head of HR for an entertainment company in Philadelphia and had travelled across the country to attend the convention with his two sons.

“Comic-Con has definitely been missed so this seems like a great time to come back and definitely what fans needed,” he told PA.

“This costume took four or five months to pull together and seems to be getting a great reaction.

“This headpiece is actually a garden globe. I sawed off the bottom, 3D printed the collar and it’s LED lights inside – this is one of the easiest parts to make.”

Jose Cuadros, 30, a hospitality worker from Escondido, California, said it had always been a dream of his to play DC hero Aquaman.

“I’m having quite a blast today (and) I’m actually planning on getting some seafood later, if you get the joke,” he told PA.

“I chose to be Aquaman today because it’s been a dream of mine to be Aquaman. I’ve seen a lot of good cosplays and I’m glad to get this one scratched off my list.”

Mr Cuardros said he had bought parts of his costume including the famous yellow and green costume and large trident at Comic-Con years ago.

“The only thing I didn’t buy was my beard, I grew that myself,” he joked.

Asked about how it felt to be back at the convention amongst fellow fans, he added: “It’s great, the only thing I wish is that we didn’t have to wear masks, but I do think it’s a good idea.”

Jordan Riley, 28, from San Diego was dressed in the bold purple of Marvel’s Hawkeye, played by actor Jeremy Renner, said that the pandemic had given him time to work on his various costumes.

Hugh Grant speaks during a panel for Dungeons and Dragons: Honor Among Thieves on day one of Comic-Con International (Richard Shotwell/Invision/AP)AP/Press Association Images - Richard Shotwell

“Lockdown happened and I had more time to upgrade my cosplay, so here it is, upgraded,” he said.

“A lot of time, a lot of hours, a lot of sweat and stitching…so a lot of needle marks on my hands.”

Asked about the convention’s return, Mr Riley, who has attended over a dozen Comic-Cons, said: “It’s finally home, I’m so excited to keep on playing different characters.”

As well as portraying their favourite superheroes and fantasy characters, some fans chose more sentimental characters to dress-up as.

Alice Irvan, 38, from Washington DC, was dressed as Grace from the 2019 comedy-horror film Ready Or Not film, which was her late father’s favourite film.

“This was my dad’s favourite movie, and I bought all the materials for this costume back in January 2020 before the pandemic started and that was the last time I saw him in person,” she told PA.

“The world shut down and this costume went in the closet unfinished and then my dad passed away really unexpectedly in December of 2020.

“So now we’re back in San Diego so it’s like ‘let’s finish this’… It’s incredibly personal and people have responded well to it. I didn’t know if anyone would recognise it.

“It’s just been nice being back and having the embrace from people knowing my dad is here in the spirit of Comic-Con.”

Some of the celebrities to make an appearance on the first day of the event for panel discussions included Ben Stiller, Hugh Grant, Adam Scott, William Shatner, Chris Pine and Bridgeton’s Rege-Jean Page.