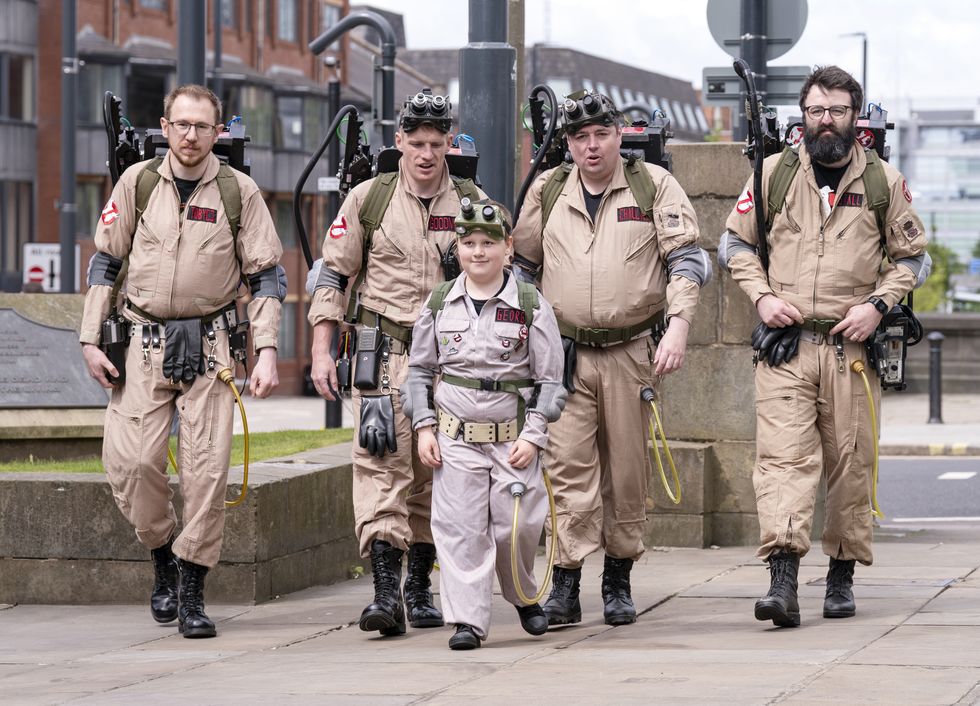 A Ghostbusters superfan who has a congenital heart disease enjoyed a dream day out as he hunted ghouls at a library in Leeds.

George Hinkins, eight, from Harrogate, North Yorkshire, lives with Ebstein’s anomaly, a rare form of congenital heart disease which means he was born with half a working heart.

George is often unable to join in with his peers as a result, but found positivity through the Ghostbusters films – and on Sunday he was able to live his dream.

With the help of Make-A-Wish UK and a supportive community, George was driven to Leeds Central Library in the film’s famous Ecto-1 vehicle alongside a group of local Ghostbusters volunteers.

He and his family were given a police escort into Leeds, where George was met with a guard of honour from local police, before enacting a scene in the library, which had been decked out in a spooky fashion.

The young ghoul hunter led four other Ghostbusters through the library in search of paranormal activity, before capturing a ghost, taking it to West Yorkshire Police and receiving a certificate of thanks from the mayor.

“Any parents who have a child with an illness or a disability, especially a disability like George’s heart condition, life can be difficult for them,” George’s mother Jane Hinkins, 46, told the PA news agency.

“Everything he does is a little bit harder than it is for somebody else – with only half his heart and low oxygen levels.

“Today has given him so much confidence – he just turned up and jumped out of the Ecto-1 in front of loads of people… and just strolled up to the Mayor of Leeds at the door of the library and was shaking hands.

“It’s really made us grateful and it makes you feel that you’re not alone. So many people have come together to recognise what he’s been through but also what families like us go through.

“It’s given us something that George will take with him for the rest of his life.”

“We’re just blown away by the number of people who gave their time and their venue and gifts to make George and his family extremely happy.

“Memories that will stay with all of us, I think, for a very long time.”

Ms Porter pointed to the support of local community members and businesses who donated their services for free to make George’s wish come true.

She said: “It means that our own budget was minimal, which means that we as a charity can grant more wishes for other children, and that’s what we’re about.

“We’ve got so many more children that we need to reach with a wish.

“I hope by seeing this magic, more people are inspired to support us and to refer children to us for wishes.”

To find out more about George’s wish and the work of Make-A-Wish, visit www.make-a-wish.org.uk/news/georges-wish-to-be-a-ghostbuster.

Please log in or register to upvote this article
charityGhostbustersLeeds