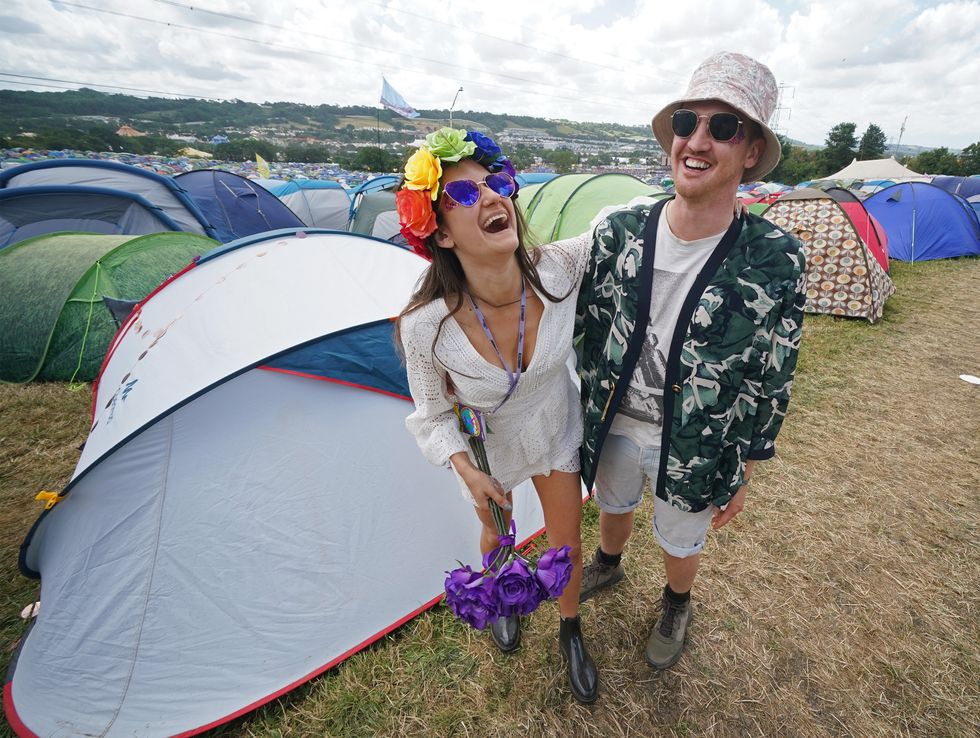 A Bristol couple who first met at a music gig donned festival gear and glitter as they renewed their wedding vows at Glastonbury.

Glastonbury is not licensed to hold legal weddings so, after being married six weeks ago, festival lovers Lara and Elliot Dayeh-Bunce kissed in a renewal ceremony at the Church at Glastonbury tent on Saturday.

The pair had glitter on their faces and Mrs Dayeh-Bunce donned a white dress and colourful flower-wreath tiara for the occasion, while Mr Dayeh-Bunce wore a jacket and t-shirt combination with denim shorts and a bucket hat.

Mr Dayeh-Bunce, a 32-year-old delivery consultant, is attending his 23rd festival at the site this year and had planned to propose at Glastonbury in 2020 before it was later cancelled by the Covid-19 pandemic, later proposing on Christmas Eve that year.

“Glastonbury is just a really special place for both of us,” Mrs Dayeh-Bunce, a 30-year-old medical sales manager, told the PA news agency.

“Elliot’s mum has always worked in the church tent so I think she said that they can do it and I’ve not seen anyone do it here before.

“We just thought it’d be really special, you can’t get married at Glastonbury but this is the next best thing that you could do.

“It’s really fresh because we only got married that six weeks ago.”

The couple said they had “just rolled out of bed” for the blessing, having arrived back at their tent at 4.30am on Saturday morning after enjoying the Park Stage at Worthy Farm in Somerset.

They met at a gig eight years before after Mrs Dayeh-Bunce loss contact with some friends.

“We went to a gig and my friends ditched me… Elliot and his friends looked after me and we kind of just stayed friends ever since,” Ms Dayeh-Bunce said.

“We were friends for about three or four years before we kind of got together.

Mr Dayeh-Bunce laughed: “I got out the friend zone.”

The Christian service was officiated by Lee Barnes, 47, the lay minister and warden of readers for the Diocese of Gloucester.

Please log in or register to upvote this article
GlastonburyMusicSomersetWeddingWorthy Farm