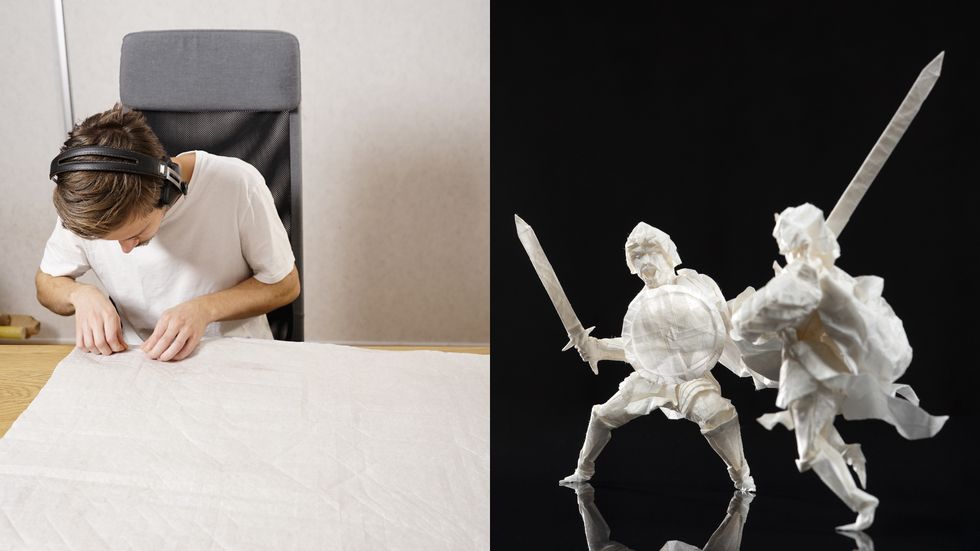 Juho Konkkola, an origami artist from Finland, has completed a two and a half year project which used just one sheet of paper and took 109 hours of folding (Juho Konkkola/PA)

An origami artist from Finland has completed a two and a half year project which used just one sheet of paper and took 109 hours of folding.

Juho Konkkola, 24, from Jyväskylä, began planning his latest and most daunting creation – ‘Duelling Knights’ – in the summer of 2019.

He told the PA news agency: “It was huge accomplishment; it is the greatest work I have done so far.”

The finished piece shows two sword-wielding knights engaged in battle, with one bearing a shield as the other raises his weapon.

Mr Konkkola described origami as a “very therapeutic process” saying he often does it “mindlessly without thinking that much.”

Fans of his work may find that statement intriguing given the effort that went into this work – the artist’s latest masterpiece was folded from September 2021 to January 2022 and required 5,377 individual creases to be made beforehand.

The finished work involved zero cuts and zero tears. If it were unfolded, it would revert back to a square piece of paper.

“In June 2019 I was talking with an art curator about my display for the Generation 2020 Exhibition in Amos Rex, Helsinki,” Mr Konkkola said.

“We were talking about putting the origami figures to fight each other and that gave me the idea – would it be possible with just one sheet of paper instead of two?

“(It was) a big relief that I didn’t tear the paper in the process or fail the piece.

“The last moments were getting quite scary when finishing. I was quite tired and I was really excited to share it with people.”

“It is always a delight to see people show their interest or appreciation, it motivates me to keep on going,” Mr Konkkola said.

“At the same time, it is quite exhausting to go through thousands of comments, despite being overwhelmingly positive.”

Mr Konkkola has been creating origami figures for 15 years and said a cat’s head was one of the first things he attempted.

He has come a long way since then, with ‘Duelling Knights’ requiring excruciating attention to detail.

“The part that really stuck in my mind was posing the characters,” he said. “I really had to plan that part a lot before doing a single fold because one single mistake could have ruined the piece.

“Once I had (a) thorough idea how the poses worked, I had to commit to them, because I couldn’t have gone back if it didn’t create the vision I was looking for.

“Some of the smallest details are in millimetres so the sheet needed to be folded very precisely, and it was a fun challenge to have a try at that with just fingers and a toothpick.

“Also, I folded the paper so long that it already started wearing from the stress it got from the folding. The paper fibres started to peel off from the paper.”

“This is about as difficult as origami gets at the moment… but there is only one way to find out if I can make anything more difficult than this. Maybe we will see that next year.”

Please log in or register to upvote this article
ArtReddit

Boston Dynamics pledges not to weaponise their terrifying robots