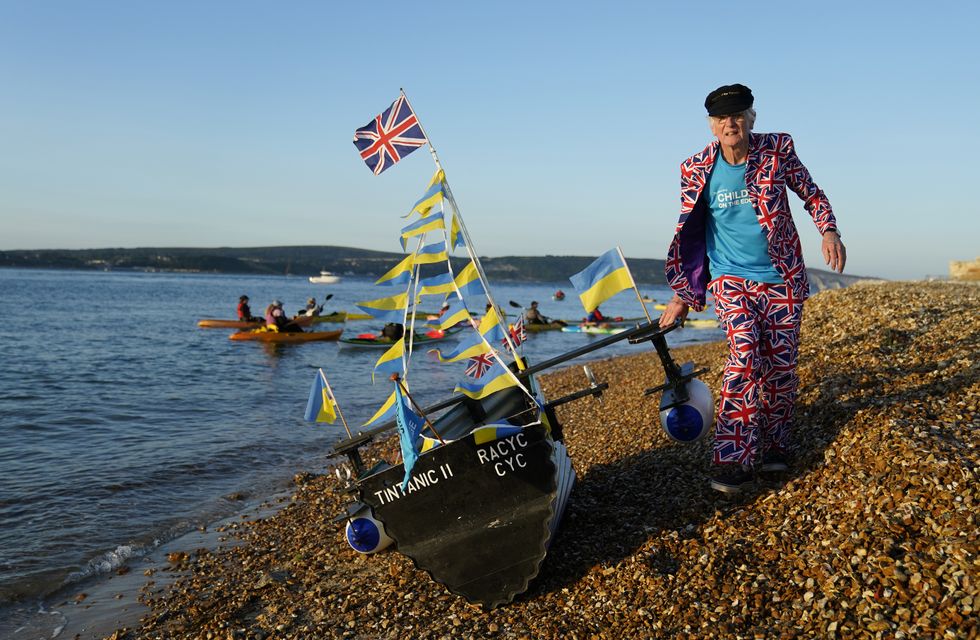 A retired Army major who rowed across the Solent in a home-made tin boat for charity said the journey “couldn’t have been better”.

Michael Stanley, known as “Major Mick”, set off in the “Tintanic” across the Solent on Saturday, making his way from Hurst Castle in Lymington to the Isle of Wight.

The 81-year-old has raised more than £8,000 and rowed 44 out of a planned 100 miles so far this year for Children on the Edge, a charity helping Ukrainian refugees crossing the border to Moldova and Romania.

“The Ukrainians need every help they can possibly get,” Mr Stanley told the PA news agency.

“And I just felt that if I could raise a few pounds for them, it’s a drop in the ocean but it’s something rather than nothing.”

Donning his famous Union Jack suit, Mr Stanley captained Tintanic II across the water on a short trip which took around one hour.

“Beautiful sunshine and wonderful scenery, and the sea was very calm,” he said.

“It couldn’t have been better.”

Mr Stanley, who served in the Royal Scots Dragoon Guards for 35 years, said his sailing mission – which has included trips across the Beaulieu river in the New Forest and the Serpentine in Hyde Park – is about “putting smiles on people’s faces”.

“People have been extremely generous and kind,” he said.

“And it’s not all about money, but it’s about putting smiles on people’s faces.

“I’m dressed in a Union Jack suit this year out of respect for Her Majesty’s jubilee year.

He made the Tintanic out of two sheets of corrugated iron in March 2020, the year he started rowing.

“(It is) two sheets of corrugated iron which I bought and then bits and pieces which I had in the house or the garden to make the rest of it,” he explained.

Mr Stanley is not yet sure where he will row next but is “very glad” to be supporting Children on the Edge, decorating his boat in many Ukrainian flags.

“It’s a local Chichester charity run by young and enthusiastic staff and they are really helpful,” he said

To find out more about Mr Stanley and his fundraiser, go to: www.justgiving.com/tintanicforukraine

Please log in or register to upvote this article
charityUkraineUplifting