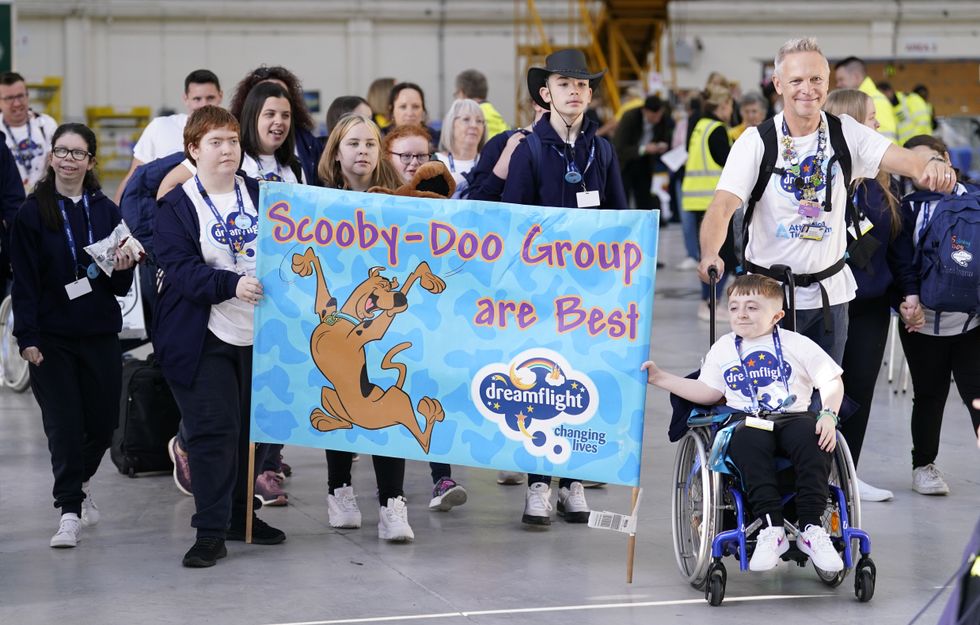 Almost 200 disadvantaged and seriously-ill children have taken off on a charity-funded dream holiday to Florida.

For the first time since the coronavirus pandemic, youngsters from across the UK are being taken on the trip of a lifetime, organised by Dreamflight.

Before boarding a specially chartered British Airways flight at Heathrow Airport on Sunday, they were greeted with music played by a marching band, as well as dogs from the Metropolitan Police.

The 192 children, who have been picked to join the 10-day holiday in Orlando having battled serious illness, disability or trauma, cheered and stroked the dogs as they arrived.

For many, the highlight of the trip, for which the charity has raised £1 million, will be swimming with dolphins at Discovery Cove.

Safa Thagia, 14, from Bolton, Greater Manchester, said: “I’m really excited for the whole experience, there’s going to be a lot of great activities and memories I’ll have for my whole life.

“I can’t wait to be swimming with dolphins, it’s a once-in-a-lifetime experience.”

Ashton Owen, 12, from Trefechan, South Wales, said: “I really can’t wait now, I just want to get there and have fun.

“I want to hug a dolphin – that will be unbelievable and something I won’t forget.”

Harvey Walker, 15, from Poole, Dorset, who had been on the list for the trip that got cancelled last year, said: “I’m a bit nervous, but also excited – it’s my first trip without my parents.”

The children will visit a host of attractions, including SeaWorld, Disney World and Universal Studios.

For many, it will be the first time abroad without their families.

Paralympic gold medal swimmer and Dreamflight patron Liz Johnson, who went on the trip as an 11-year-old in 1997, said: “A lot of these young people spend their whole life being the odd one out, whereas here, there’s a lot of authentic inclusion.

“Their differences are normalised and they’ve got the best group of volunteers looking after them, so they can just feel empowered to find themselves.”

Lisa Bishop, fundraising manager at Dreamflight, said: “As this is the first trip since the pandemic, it’s absolutely huge – we’ve got some children who were nominated in 2019.

“We have raised £1 million for this year’s holiday.”

More than 6,000 children from across the country have been involved in Dreamflight holidays since the first one in 1987.

This is the 34th trip put on by the charity.

Patricia Pearce, who founded Dreamflight, said: “It was quite funny yesterday when we were all getting together.

“It was quite an emotional day because we haven’t done this in three years and to be back together is very special.”

Director of flight operations at British Airways, Captain Al Bridger, said: “It’s an absolute privilege for us to be involved – we’ve missed this through Covid.

“To be back again is wonderful.”