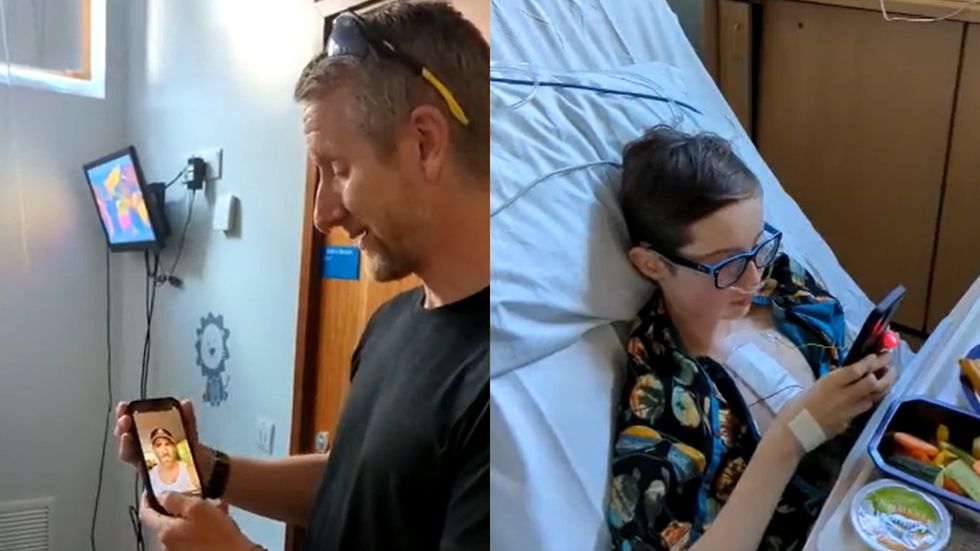 Ryan Reynolds surprised a 13-year-old in Newcastle with a message of support after the teenager underwent open-heart surgery.

Ivan Hollingsworth, 47, from Whitley Bay, Tyne and Wear, sent a message out on Twitter on Tuesday evening on behalf of his son Seb, asking “How do we get a @MarvelStudios Superhero to send a message to our Heart Hero Seb?”

Deadpool star Reynolds replied “Can you open your DMs?” sending Mr Hollingsworth’s phone into overdrive before arranging a video message which was played for Seb in his hospital bed in Newcastle.

“You can call me Deadpool, call me Green Lantern, call me anything you like!” Hollywood star Reynolds can be heard saying.

“I hear you’ve been going through it pal, and it sounds like you’ve got a ton of amazing people who love you very much.

“I just want to send my well wishes and send you all my love, and I hope I can see you in person one of these days pal – hang in there, you’re doing amazing and I’m super proud of you, alright Seb?”

Seb was born with a congenital heart defect which required him to have “life-saving” surgery when he was 16-weeks-old, according to his father.

Before Christmas, the family found out he would require more intervention, and on Monday he underwent major open-heart surgery.

“He’s 13, he’s been so anxious about this surgery for months, and it’s a lot for a 13-year-old to take on board,” Mr Hollingsworth, who is the chair of the Children’s Heart Unit Fund, told the PA news agency.

“We talk about kids being brave and resilient but in truth he was terrified. I was sat there watching him and he’s doing so well, but he’s in incredible pain and just feels rotten.

“I just sat there at his bedside the night before last, and thought he deserves something.”

Mr Hollingsworth said that not only did Reynolds send his support to Seb, but he had been messaging as well to keep in touch, as well as inviting the family to his football club in Wales, Wrexham AFC.

“He’s been messaging me saying ‘please keep in touch. I want to know how Seb’s doing’. Who would ever have thought you’d say that sentence?” he said.

“Just saying ‘I really want to stay up to date. I know Wrexham is a long way away, but if you ever want to come down you’ve got the best seat in the house’.

“When people do things like that, they must get inundated. But it’s difficult to express the impact.

“Me telling him he’s being brave and how amazing he’s doing with his rehab, is kind of like what dads do. Getting a message (from Ryan Reynolds) is different, isn’t it?”

Please log in or register to upvote this article
NewcastleRyan ReynoldsShowbiz